Falling costs in Europe are prompting US. offshore wind developers to raise growth outlooks but faster deployment will require accelerated supply chain and infrastructure support, company executives said at the U.S. Offshore Wind 2017 conference on May 8. 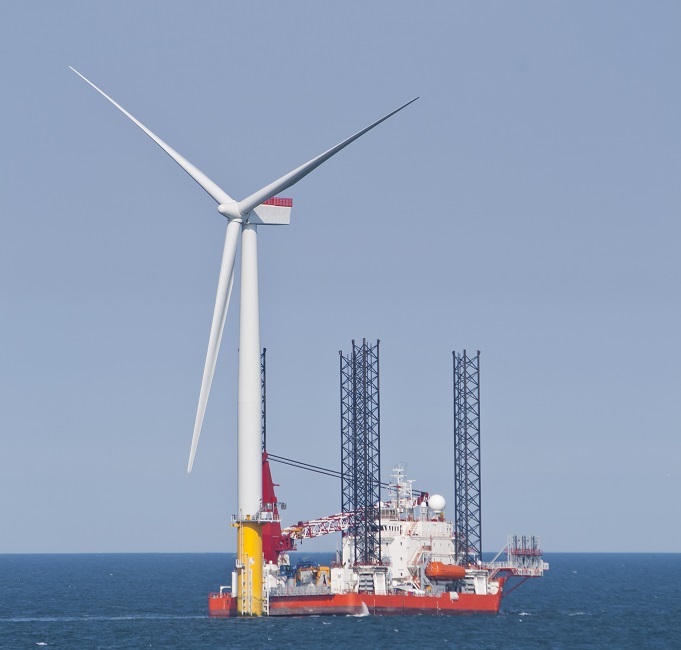 On May 11, the Maryland Public Service Commission (PSC) awarded offshore wind renewable energy credits (ORECs) to the 248 MW U.S. Wind and 120 MW Skipjack Offshore Energy projects, expected to be first large-scale offshore windfarms in the U.S. The projects will receive a 20-year levelized price of $131.93/MWh and experience in Europe has shown that the cost of subsequent U.S. projects will drop as developers gain from economies of scale and growing industry infrastructure.

European offshore tender prices in US $
(Click image to enlarge) 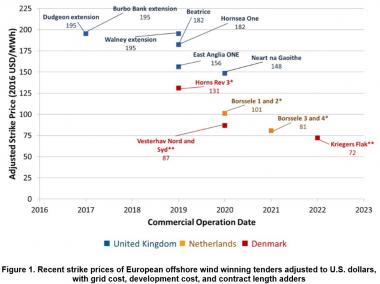 Bloomberg New Energy Finance has predicted up to 4 GW of offshore wind capacity could be installed in the U.S. by 2030 but global costs are falling faster than expected and these forecasts may underestimate deployment rates, Sven Utermohlen, Chief Operating Officer of E.ON Climate & Renewables, told the conference in New York.

"If the competitiveness of the business case is supported, there might actually be a lot more growth," he said. E.ON has stakes in nine offshore wind farms in Europe and owns over 1 GW of operational capacity.

According to Doug Pfeister, Managing Director of Renewables Consulting Group, the U.S. could procure over 5 GW of offshore wind projects by 2025 and as much as 11 GW by 2030.

These projections assume several states not currently active in offshore wind-- including those on the West Coast-- will launch market development to achieve carbon reduction goals and renewable portfolio standard (RPS) targets, Pfeister told the conference.

"When you do the math, you can see that they are not going to get there without offshore wind," he said.

High costs held back European offshore growth for a number of years, but recent cost reductions have opened up new markets, Utermohlen said.

"It feels like we have unlocked a lot of potential," he said.

A significant number of U.S. power plants will need to be replaced in the coming years and reductions in offshore wind costs have made the technology more competitive than nuclear and coal-fired generation, Stephen Bull, Senior Vice President of Statoil’s Wind & Carbon Capture and Storage business, told the conference.

"This is going to open up [offshore capacity] numbers that we really didn't dream of," Bull said.

A recent study by the U.S. National Renewable Energy Laboratory (NREL) has shown that U.S. offshore wind plants could be built on an unsubsidized basis by the late 2020s.

NREL estimates by 2027 there is potential for 65 GW of economically viable (unsubsidized) offshore wind capacity just in the state of Maine, and 55 GW in Massachusetts. 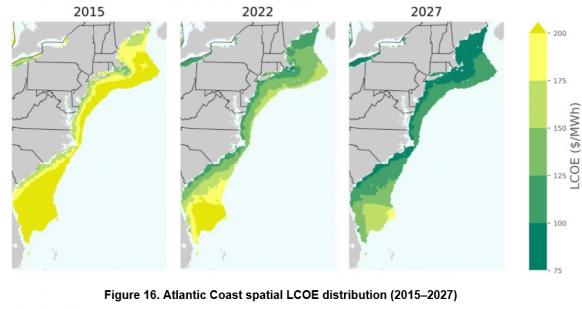 NREL's calculations do not include government support for offshore wind projects, such as tax credits or subsidized offtake contracts, and the estimates will need to be updated to account for plummeting strike prices seen in Europe's latest offshore wind tenders, Musial said.

"We are in the process of developing risk profiles to understand how these strike prices can be translated into U.S. costs...Taking our unsubsidized economic potential numbers and putting that into a framework where we can capture risk and [government] policy is probably our next step," he said.

While falling costs have raised the potential for U.S. offshore wind deployment, growth rates will depend on the planning and buildout of supply chain and infrastructure.

"I think we have to make sure in the U.S. we jump over that period immediately," he said.

The buildout of utility scale projects in Maryland should be followed by projects in Massachusetts and New Jersey and this sequence of projects will boost supply chain development and maximize economies of scale, Paul Rich, Director of Project Development at US Wind, said.

"Sequencing will be important...This would substantiate the most optimistic [capacity predictions]," he said.

"We are ready to go. Facilities up and down the East Coast either need to be converted to this new industry to support it, or start from new, but they do exist as a natural resource," he said.