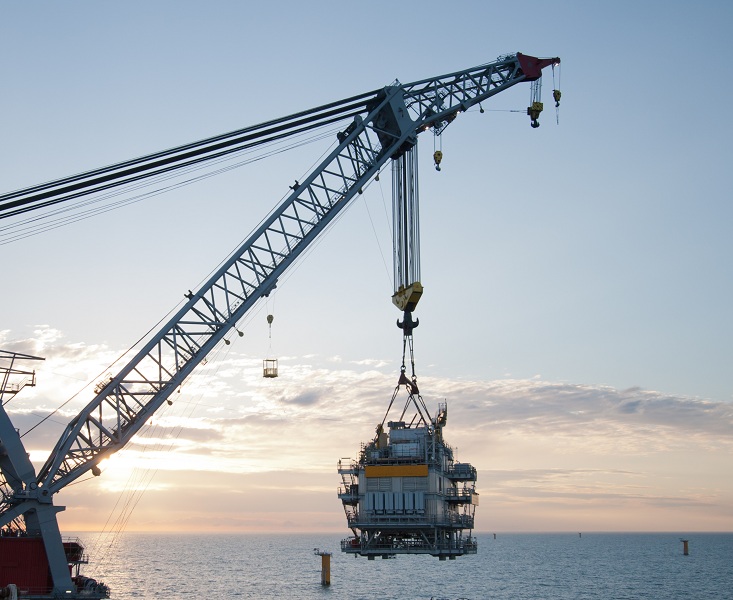 LEEDCo expects the use of Mono Bucket foundations to yield savings on equipment and installation costs. (Image credit: DJMattaar)

Norway’s Fred Olsen Windcarrier is the lead installer and installation advisor on the project which is set to establish a supply chain for further expansion in the Great Lakes. The region could host 7.4 GW offshore wind power capacity, one-fifth of US offshore potential, according to the National Renewable Energy laboratory (NREL).

Modifications in project design and the decision to use Mono Bucket foundations have reduced the Icebreaker cost projections, Wagner told Wind Energy Update. The project has thus far received $51 million in federal support and LEEDCo also expects to qualify for an Investment Tax Credit (ITC) of up to 30%.

A Power Purchase Agreement (PPA) for 65% of output has been signed with Cleveland's local utility, and LEEDCO hopes to sign PPA agreements with other parties for the remaining 35% in the coming months, Wagner said.

No further federal funding will be needed to develop the project, and Icebreaker's team is seeking additional cost savings during the construction phase, he said.

Under current estimates, the generation cost will be “well below” the cost of Deepwater island's 30 MW Block Island wind farm, Wagner said.

Block Island will be the U.S.' first commercial offshore wind farm when it comes online in the fourth quarter of 2016.

The expected generation cost for Icebreaker will be disclosed when all the PPAs for the project have been signed, Wagner said.

LEEDCo is to also announce the selected contractors and engineering firms in the next few months, he said.

In May, local politicians said the federal funding for Icebreaker would help turn Northeast Ohio into a key region for offshore wind growth.

The federal funding does not require LEEDCo to use local manufacturers, but the developer has committed to local resources, including steel production, wherever possible, Wagner said.

Icebreaker's foundations will use 400 tonnes of steel and offshore towers will use a further 250 tonnes.

Local steel facilities will play a major role as the U.S. Midwest has some of the best steel production experience in the world, Wagner said.

“We won't need new facilities, it is a matter of getting capable facilities geared up to build something new,” he said.

Icebreaker will be the first project to manufacture Mono Buckets in the U.S. and LEEDCo is in discussions with potential U.S. manufacturers to ensure efficient and accurate production, Wagner said.

“But the thing that we have to consider is that it is a slightly more complex fabrication than a Monopile,” he said.

U.S. firms must also be certified to supply offshore towers and the developer is currently working with potential suppliers to accelerate this process.

"I don't know if we will be successful or not, but part of our mission is to bring more work here,” Wagner noted.

According to John Colm, President of the Great Lakes Wind Network (GLWN), there are around 100 potential regional offshore wind suppliers across all product categories.

GLWN has identified six suppliers which could manufacture the Mono Buckets, and a handful of firms which could qualify to produce the towers, Colm said.

The establishment of a new supply industry will require a demand for at least 100 turbines a year, Colm said.

“The supplier capability is potentially quite strong, what has been missing is consistent demand for domestic U.S. manufacturers, in particular in the offshore wind space,” he said.

“The Icebreaker project is proposed as a pilot, and that is not enough demand to really pull significant product for the supply chain in the near term.”

Lake Erie alone has a potential wind power capacity of 50 GW and the development of 10% of this capacity would be a great accomplishment for the area and provide a major boost to industry, Wagner noted.

The best potential sites for future projects in Lake Erie lie east of Cleveland, about 20 miles offshore, where promising wind resources have been identified, he said.