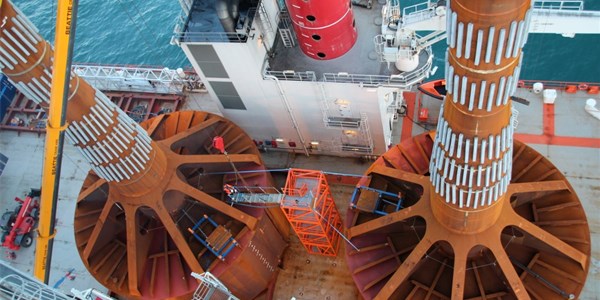 Installation of the Mono Bucket at Dogger Bank, North Sea

The Mono Bucket is design-verified up to a water depth of 55 metres with an 8 MW turbine and LEEDCo will be the first offshore wind project to deploy the system in US waters.

“Taking an active role in the evaluation of foundation possibilities across a number of US sites, Universal Foundation will clearly demonstrate a strong competitive advantage, which in effect will materialize in lower project costs,” Kristian Ascanius Jacobsen, Head of Business Development at Universal Foundation said.

The US market can learn a lot from the decades of developments in Europe and the early adoption of innovative solutions can help the industry develop a competitive starting point and allow others to follow, he said.

Developed by Denmark-based Universal Foundation (UF), the Mono Bucket foundation is an all-in-one steel structure consisting of a monopile shaft attached to a large-diameter bucket.

Through a utility-led support program, UF installed two met masts at Dogger Bank in the middle of the North Sea in 2013 and in 2014 the company completed a series of 29 successful trial installations in various challenging soil conditions off the east coast of England. Mono Buckets are also being considered for a number of European projects.

The UF Mono Bucket foundation is suitable for a wide range of soil profiles and it also benefits from noise-free installation and cost reduction, according to Torgeir Ramstad, Managing Director of Universal Foundation Norway.

Ramstad said that new UK offshore projects using the mono bucket design are requiring 25% less steel than comparable monopoles and also reduce marine operations. The Mono Bucket design has a single-lift or self-floating installation, integrated transition piece and integral scour prevention, which have reduced the requirements on materials and mobilisation.

The foundation has an integrated transition piece with no grouted connections which should also limit Operation and Maintenance requirements.

“This, together with the integrated scour prevention, could reduce the maintenance requirements on foundations. In the decommissioning phase, the foundation is also completely removable by reversing the installation process,” said Ramstad.

The company is currently performing a study for the US Department of Energy to see if the Mono Bucket design could become the primary foundation of choice for the US offshore market. How widely it can be used will also depend on the seabed.

If the bed rock occurs deeper within the seabed, but is still at a level where it will be a challenge for a Monopile or Jackets, then the Mono Bucket can manage this in the design, according to UF’s Jacobsen.

“To ensure sufficient bearing capacity of the foundation we can vary on the diameter and the length of the skirt and hence can cope with most site conditions,” he said.

The main goal of the pilot project is to design the foundation and use US manufacturing capacity to lower costs, Wagner said.

“We have engaged non-profit advisory firm GLWN to help us with this and they will act as the interface between our European partners and the US manufacturers. Once the final design and this process are complete, they will be in a position to compete in the bidding,” Wagner added.

For a project like this the greatest challenges are the initial costs for building a new product.

“We have been working with Fred Olsen Windcarrier to negotiate the logistics and installation methods so that we can find a cost effective solution,” Wagner said.

Wagner’s company is also in close contact with UF and is keen to reduce the costs even further. Their geotechnical campaign for this summer is geared to remove as much uncertainty as possible and come up with the most efficient design.

There are 11 offshore wind projects being developed in 10 states, according to the American Wind Energy Association. However, progress has largely stalled due to higher than expected project costs and public opposition.

Virginia is a target offshore wind area due to its high quality wind, according to Saifur Rahman, director of the Virginia Tech Advanced Research Institute.

As an incentive, the US federal government said it would give incentives of $47 million each to Virginia, New Jersey and Oregon to develop offshore wind power.

However, Virginia has seen a lag in demand for new power sources, such as offshore wind, compared with states such as New England, where electricity rates are relatively high.

Dominion Virginia Power, which owns the regulatory rights to develop offshore wind power in Virginia already, has nuclear, coal, natural gas and hydro power at its disposal, and is yet to commit to commercial offshore wind projects.

Dominion and members of Virginia Offshore Wind Development Authority are meeting with European offshore wind companies and specialists this year to learn how costs can be brought down considerably.

Given that Dominion has the biggest pumped storage plant in the world, wind project profits could also benefit from using energy storage.

Developing the supporting supply chain will be key for the future of US offshore wind, Jacobsen said.

“The Government [state and federal] must set clear ambitions for offshore wind for the project developers / utilities to have comfort in their business case, which in effect again will trigger investment and commitment in the local supply chain,” Jacobsen said.

He also highlighted the power of EU-US knowledge sharing.

“Learn from the partnership to later develop [US-led] projects and make qualified decisions on areas, such as component selection.”

Project developers can learn more about the industry by teaming up with European companies looking to expand their portfolio outside their continent, Jacobsen said.

This would not only save them money, but sharing expertise in this field could potentially also lead to new inventions and further cost reduction.

“We have seen this with DONG Energy and their entry into the US,” Jacobsen said.

RES Americas secured the rights when it won one of the two leases awarded at the offshore wind auction held by the Bureau of Ocean Energy Management (BOEM) in January this year.

The lease will be taken over by DONG Energy and RES Americas will continue to support development of the lease area as agreed with DONG Energy.