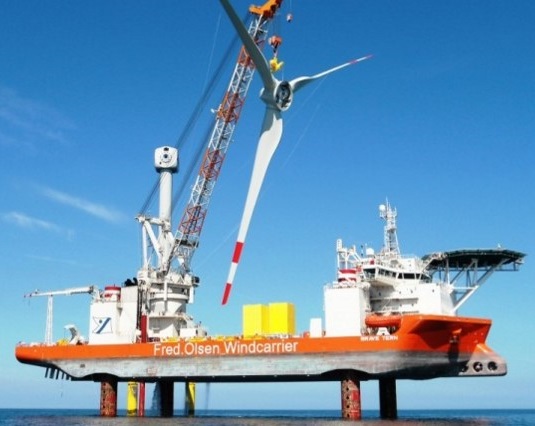 According to local media reports, the Cleveland authorities have also set out framework agreements for substation upgrades to accommodate the project.

The latest agreements provide a boost to the Icebreaker project, which would be the first freshwater wind farm in the world and help establish an offshore industry in the Great Lakes region. The Great Lakes could host 7.4 GW offshore wind power capacity, one-fifth of US offshore potential, according to the National Renewable Energy laboratory (NREL).

LEEDCO announced in June 2015 it would use Mono Bucket foundations for the Icebreaker project, predicting systems and installation cost savings of 30%-50% compared with monopile systems.

However, Icebreaker and future Great Lakes projects face major vessel cost challenges, driven by the long distance between the Great Lakes and the Atlantic Sea.

Fred. Olsen Windcarrier expects the modification of existing U.S. barges to be the "most likely solution to installing in the region,” Even Larsen, the firm’s Head of Commercial and Projects, told Wind Energy Update.

At the same time, Fred. Olsen Windcarrier is continuing to investigate alternative options for future projects. One option involves navigating vessels through the sequence of locks between the Great Lakes and the north-eastern coast, Larsen said.

“The vessels and installation methods developed for LEEDCo will certainly be of interest for future projects in Lake Erie and the region,” Larsen said.

A 2013 Douglas Westwood assessment on U.S. vessel requirement raised ‘red flags’ against three out of four of the vessel types needed during the construction phase for the Great Lakes, denoting no available vessels. This compared to two red flags for the Pacific Coast and one each for the Gulf and Atlantic coasts.

“While this is currently not a constraint on development it certainly could be in the future in the absence of logistical planning and pinpointing timelines for vessel requirement,” he said.

Lock constraints on the St. Lawrence Seaway between the Great Lakes and the Atlantic coast are preventing the sharing of vessels between East Coast development and Great Lakes projects.

“[The] sharing of larger installation vessels will not be possible owing to lock restrictions which force a beam (width) maximum of 23.77 [meters],” Larsen said.

Jack-ups with 39 meter beams like Fred. Olsen Windcarrier’s Brave Tern and Bold Tern “simply won’t be able to fit through the locks,” he said. The Bold Tern is to begin turbine installation this summer at the Block Island project, Rhode Island.

Even if installation vessels could navigate the Seaway’s locks, in order to comply with the U.S. Jones Act on sea safety, feeder barges would be required to transport staff and goods, adding to installation costs and timeframes, Larsen said.

Vessel maximums on the St. Lawrence

In order to limit vessel costs, developers have the option of limiting turbine sizes and project depths, adapting the local vessel fleet or contributing towards the construction of a new vessel which would operate exclusively in the Great Lakes region.

A conservative solution to vessel challenges would be to restrict development to turbines in the sub-4 MW range and shallow waters below 30 meters. This would enable existing smaller vessels to fit through the Seaway’s locks and move between activity on the East Coast and the Great Lakes.

However this would also deprive projects of the economies of scale achievable from large scale projects. Developers will be under considerable pressure to drive down costs to maximize competiveness.

“Generally speaking, the region’s electricity prices are less than those on either U.S. coast, so the additional costs associated with developing offshore wind mean that not much is happening here beyond the LEEDCo project,” Pruss said.

There is a large supply of lake freighters and barges in the Great Lakes region, and they are commonly adapted to meet the changing demands of the industrial heartland. Fred Olsen will continue to work with vessel companies on the installation of the Icebreaker project.

“In terms of Icebreaker, we are awaiting the final information on component weights which will determine which barge we use and what modifications will be required,” Larsen told Wind Energy Update.

Donjon Marine’s Farrell 256 crane barge was used for sediment testing on the project site in 2015.

The type of foundation will also influence vessel selection. Floating turbines and gravity-based solutions, such as Universal Foundation’s Mono Bucket, should help to reduce the need for specialized installation vessels. These technologies will also allow projects to be installed in sites with deeper waters, which are not visible from the shoreline.

A purpose-built, large turbine installation vessel (TIV) which would essentially be ‘locked-in’ to the region is another option. However, the cost of building a TIV is estimated at $300 million and at this stage the project pipeline is neither full nor stable enough to justify the spend, according to Douglas Westwood.

Initial plans for offshore wind in the Great Lakes region favored the construction of a TIV, but overall project development in the region has been slow.

“When the [Great Lakes Wind Council] sat down to deliberate vessel requirements back in 2009/10…the consensus was that a specialized vessel infrastructure would have to be developed to serve the region,” Pruss noted.

As the Icebreaker project advances and the team confronts the challenges of developing the first project in the region, the creation of a robust pipeline of future projects will require clear and cost-effective strategies for vessel supply.

The speed and efficiency of the Icebreaker installation, in particular the effectiveness of the vessels used on the project, will be closely watched by other developers looking to move into the market.