Commercial floating wind projects are to be commissioned in UK, Ireland, France and Portugal in the coming years and developers expect wider deployment to drive down costs as projects benefit from installation experience, economies of series and rising investor confidence.

Bottom fixed offshore wind (BFOW) costs have fallen dramatically in recent years, but an estimated 80% of offshore wind resources are in water depths of over 60 meters, where BFOW projects are not suitable. This equates to 4 TW of offshore capacity exclusively available to floating projects, according to industry group WindEurope.

Statoil aims to reduce the cost of floating wind power to 40 to 60 euros per MWh ($46-$70/MWh) by 2030 and the learnings from the completed 30 MW Hywind Scotland project will open up new global market opportunities, Irene Rummelhoff, executive vice president of Statoil’s New Energy Solutions division, said in a statement.

France has emerged as a leading floating offshore wind market. Floatgen, the country’s first floating wind plant, was completed on October 13, ahead of six larger BFOW projects which have been held back by delays linked to permitting issues and a heavy emphasis on local content.

Wind industry group France Energie Eolienne (FEE) has set a target of 6 GW floating offshore wind capacity by 2030 and has urged the government to launch a tender for 2 GW of floating capacity next year. The projects could be commissioned from 2024, according to FEE.

“The French FOW market has enormous potential since there is a clear political will," Bruno Geschier, Chief Sales & Marketing Officer at Ideol, said.

“Talking to all the stakeholders involved I can clearly see that 6 GW is not at all unrealistic, with the capacity [potentially] split between three projects in the Mediterranean and three off the Atlantic coast,” Geschier said.

The government is yet to confirm a timeline for the commercial tender but France’s Environment and Energy Management Agency (ADEME) confirmed to New Energy Update that pre-tender activities are underway.

As it moves towards commercial tenders, France is also supporting the development of four pre-commercial (pilot) projects for a total capacity 96 MW. The projects will be sited in Mediterranean and Atlantic waters and due online by 2021. Ideol is a partner in the Quadran-led EolMed consortium developing a 25 MW pilot (pre-commercial) plant at the Grussian site in the Mediterranean.

The French government has provided 300 million euros of subsidies and loans to the pilot projects, according to a government report published in 2016. 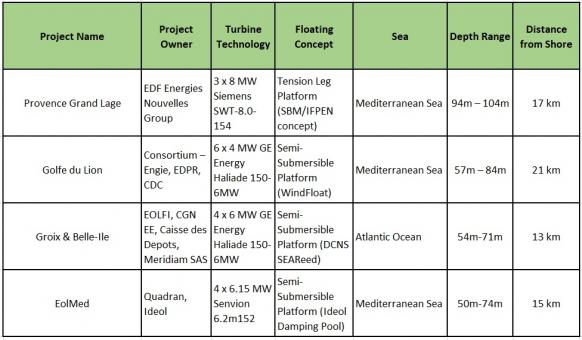 As an early mover in floating offshore wind, Ideol is set to benefit from multiple technology data across different site conditions, Geschier said.

In addition to its French projects, Ideol has formed partnerships with UK and Irish developers and has partnered with Hitachi Zosen in the NEDO consortium to build a 3 MW floating offshore wind project in Japan, due online in Spring 2018.

Ideol is responsible for the design and engineering of the two foundations for the NEDO project, one made of steel and the other of concrete. The French company is also providing expertise on optimized installation and the sourcing of materials and components.

The demonstration projects in France and Japan have allowed Ideol to trial multiple materials and logistics options, Geschier said.

“The demonstrators will be made out of different materials (concrete in France, steel in Japan), using different mooring materials, different class requirements and installed using different vessels. This will bring us a wealth of data and return on experience which we are already integrating into our pre-commercial and commercial-scale projects,” he said.

The UK Carbon Trust has predicted the capex of floating wind could fall by 48% in the transition from prototype to commercial scale, based on a study of 18 different floating wind design concepts in 2015.

The report projected capex could fall to 2.7 million pounds per MW in the 2020s, which would deliver an LCOE below 100 pounds/MWh, with leading concepts estimated at even lower costs of 85 to 95 pounds/MWh (2.4 million pounds/MW capex).

However, BFOW prices have plummeted since the Carbon Trust’s study and this has prompted many experts to accelerate cost reduction forecasts. Indeed, Statoil's prediction that floating wind power costs could be as low as 40 to 60 euros/MWh by 2030 would make it highly competitive against other generation types, including coal and gas-fired generation.

The French government set the feed in tariff (FIT) for the four 24 MW pilot projects at 240 euros/MWh, but costs have already fallen below this level.

California’s Principle Power, supplier of the WindFloat semi-submersible platform selected for France's Golfe du Lion project in the Mediterranean, has targeted a pre-commercial LCOE of between 180 and 220 euros/MWh. The Golfe du Lion project is being led by EDP Renewables, Engie and France’s Caisse des depots (CDC). 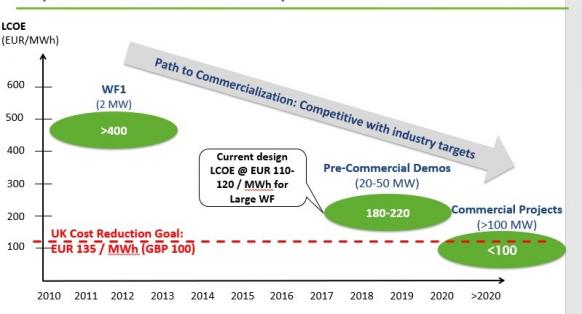 Floating wind cost reductions will be driven by higher capacity efficiency turbines, economies of scale, as well as advancements in foundations and support structures which will reduce transportation and installation costs.

Floating wind developers can simplify installation work by assembling turbines and commissioning at quayside before towing the units to site. Developers can reduce manufacturing and transportation costs by reducing the amount of steel used for foundations and substructures.

Plant designs need to remain compact while being able to accommodate rising turbine capacities in the coming years, Geschier noted.

“This not only has a massive impact on the materials’ cost but also on the cost of construction, launching, yard logistics and installation,” Geschier he said.

Weight is also key and Ideol’s floater design is up to 40% lighter than other steel semi-subs or spars, according to Geschier.

“Given the cost per ton of transformed steel, such weight difference can easily represent hundreds of millions in capex when building a commercial-scale farm,” he said.

Principle Power says its design allows for on-shore platform assembly and offshore turbine installation and repairs, and “eliminates the need for specialized and expensive installation vessels.”

The Grioix and Belle-Ile per-commercial project south of Britany will use semi-submersible platforms developed by GE and marine specialist DNCS. The use of both concrete and steel, cost effective assembly and fast installation will cut costs, according to the companies.

“To save time the mooring system is installed while the platform is being built. This approach eliminates the need for expensive and lengthy offshore campaigns,” DCNS said in a statement.

Accelerated growth in floating wind would allow France to establish a strong domestic industry base and create much-needed jobs.

Onshore manufacturing bases will need to be cost efficient and allow suppliers to respond to large commercial orders under what can be challenging time lines.

“Developers will be expecting 50 floaters or more delivered under 18 months,” Geschier said.

To minimize costs, construction could take place in “secondary and less expensive harbours,” he said.