To compete on costs with fixed-bottom offshore wind and other renewables, the floating wind industry should industrialize the foundation in the same way it has manufactured and commoditized the turbines for onshore wind, according to Henrik Stiesdal, wind energy pioneer and former CTO of Siemens Windpower. 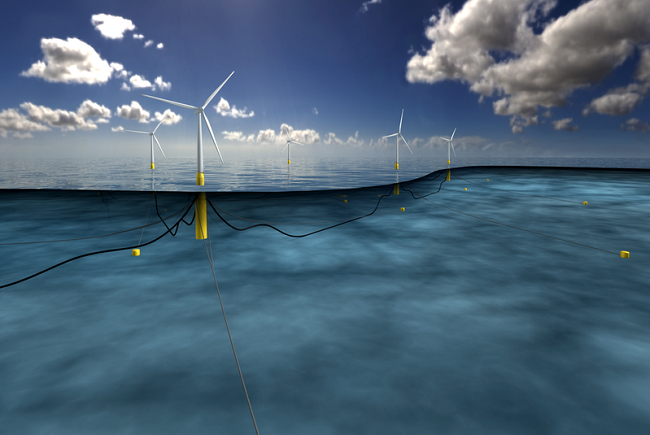 Stiesdal told Wind Energy Update that a “quantum leap” on floater designs holds the biggest potential for cost reductions if floaters can be build it in existing industrial facilities and using the existing supply chain.

“Make a design that can live with using equipment that comes out of the factories. That is the big trick on getting costs down,” Stiesdal said.

Current floating wind designs are not easily adapted for large-scale industrial implementation, according to Stiesdal, as they are very heavy and use old construction methods from offshore oil and gas.

By contrast, onshore wind has largely been cutting costs by standardizing and modularizing turbine manufacturing in factories at an industrial scale, with no fabrication on site.

This has allowed the onshore sector to significantly lower the cost per kilogram, a significant component of project capex.

The levelized cost per unit of generated electricity (LCOE) of floating wind could fall 25% by 2030 (median scenario) compared to 2014 levels, according to an elicitation survey of 163 leading wind experts around the world, published in the journal Nature on September 12.

The survey, conducted by the National Renewable Energy Laboratory (NREL) and the Lawrence Berkeley National Laboratory (LBNL), suggests significant opportunities for cost reductions for floating wind, but also a lot of uncertainties.

In the survey's median scenario, floating wind is expected to remain more expensive than fixed-bottom offshore, however it projects a narrowing gap between the two, with especially big expected reduction in the LCOE of floating offshore wind between 2020 and 2030.

However, in several cases, the survey forecasts are more conservative than developments in the industry, which has already seen the LCOE of fixed-bottom offshore wind in Europe fall below the price point expected in the survey’s baseline scenario.

Projections for floating wind costs, in particular, vary widely across the industry as there are no commercial projects in operation to glean insights from.

A Carbon Trust report published in 2015 based on an assessment of 18 different floating wind design concepts found that floating wind has the potential to cut capital expenditure (capex) by 48% in the transition from prototype to commercial scale.

Statoil, which is slated to launch the first commercial floating wind project in 2017 – a 30 MW plant off the coast of Scotland – is even more bullish in its projections, predicting 60-70% capex cuts compared with a 2.3 MW demonstration model that has been operational for six years in the Norwegian North Sea.

According to Rhodri James, manager at the Carbon Trust, floating wind could reach cost parity with fixed-bottom wind by 2030 in some regions.

Floating wind could become competitive with conventional offshore wind a lot earlier in markets like Japan, the U.S. West Coast, and potentially the French Mediterranean and Scotland, he said.

According to Walter Musial, principal engineer and manager, Offshore Wind at NREL, the LCOE for floating and fixed-bottom wind could be below 10 US cents/KWh by 2030 in many geographic regions without policy driving supply.

Further cost reductions over time could improve the cost competitiveness of floating wind, particularly as the sites available for fixed-bottom wind become more challenging to develop in deeper waters farther from shore.

Besides cost cuts, offshore wind can provide considerable benefit to the electricity system alongside onshore wind, solar PV and some other of the energy renewable generation sources. The potential for higher capacity value from floating wind relative to some renewable technologies can reduce system intermittency and provide other local system benefits.

“The current thinking is progressing away from simple least cost analysis and looking at what is necessary to integrate large amounts of renewable energy on a regional grid,” Musial said.

Given current trends, cost reductions for floating wind will be largely driven by capacity factor improvements, design advancements for foundations and support structures, efficiencies in installation processes, reduced financing costs and project contingencies, and opex cuts as floating wind projects get commercialized and benefit from economies of scale.

Reducing the amount of steel for foundations and substructures could be key, especially with increased turbine ratings, since the tonnage of steel per MW will be lower, James said.

Mooring and anchoring also have a big scope for optimization, as do installation techniques that assemble at port, tow to the site and hook up the structure at sea.

At the same time, the costs for dynamic cables and substations for floating wind, as well as the cable connectors for plug and play, could be higher than for fixed-bottom, James said.

Water depth will be a key factor in capex cost comparisons with fixed-bottom wind due to the increasing costs associated with fixing larger units in deeper seas.

Floating systems simplify installation work with turbine assembly and commissioning at quayside, followed by towing to site and hook-up.

Similarly, floating wind infrastructure could be towed to port for major repairs, which could further drive opex reductions relative to fixed-bottom wind.

For example, technology developer Principle Power estimates opex for its WindFloat plant design is 10% lower than for fixed-bottom foundations.

The company is building their first full-scale demonstration with a three-unit array off the coast of Portugal, which will follow on the heels of Statoil’s 30 MW project in Scotland.

Potentially competitive new commercial design concepts could come from companies that are already developing prototypes, such as Ideol - who have demonstrations planned in France and Japan in 2017 and 2018 - DCNS Group, who along with IDEOL won this year’s French tender for pre-commercial projects, and the University of Maine, who are set to install the first full-scale floating wind turbine in the U.S. in 2019.

By 2020, James expects to see about 5-6 concepts that have been demonstrated at full scale and have reached pre-commercial stage.