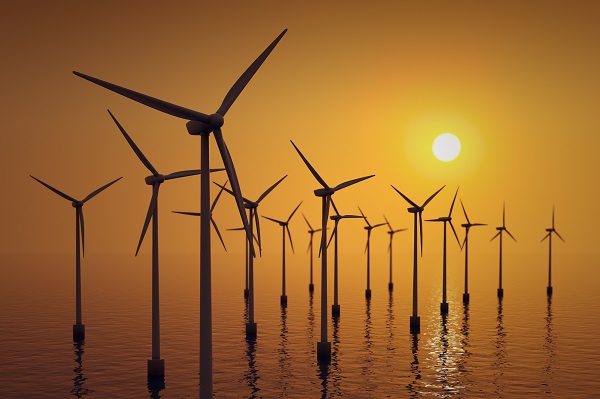 The Hywind Scotland project will consist of five 6 MW Siemens direct drive turbines deployed in a water depth range of 95 -120 meters and production is expected to start in late 2017.

Statoil said the project would achieve reductions in CAPEX of 60-70% compared with a 2.3 MW demonstration model which has been operational for six years in the Norweigan North Sea.

CAPEX costs for the first wave of commercial floating projects are expected to remain higher than fixed foundation plants, but significant gains are expected in the medium to long term.

“Floating wind technologies will remain at a cost disadvantage to fixed-bottom technologies up until 2030, with a CAPEX differential of at least 20%,” Michael Guldbrandtsen, Senior Consultant at MAKE research and advisory firm, told Wind Energy Update.

Beyond 2030, product and process innovations in floating wind are expected to close the cost gap and bring “floating wind costs on par with fixed-bottom costs,” Guldbrandtsen said.

Harnessing data aggregated from eighteen floating concepts, the Carbon Trust’s ‘Floating Offshore Wind: Market and Technology Review’ of June 2015 estimated CAPEX for floating devices would drop by 48% in the transition from prototype to commercial scale.

“These figures are pretty much in-line with our projections,” Guldbrandtsen said, although “we are slightly more conservative in our calculations for commercial stage CAPEX where we are calculating a level of around 4.5 million euros per MW (3.3 million pounds per MW).”

If Statoil realizes its ambitions of a 60 – 70% CAPEX reduction for the Hywind Scotland windfarm then this exceeds Carbon Trust’s assessments by as much as 22 percentage points.

“The key levers of cost reduction from prototype to commercial scale will come from economies of scale and structural weight reductions,” Guldbrandtsen said.

Unlike fixed-bottom plants, floating structures are not required to be site-specific in terms of conceptual design and lower cost mass-production is a more viable proposition.

Togersen told the conference that “simple, safe and efficient in-shore assembly is one of the main advantages of floating wind units compared with bottom-fixed.”

Onshore assembly, combined with the ability to tow a fully assembled structure to site via tug boats for installation rather than require expensive Dynamic Positioning (DP) vessels or heavy lift jack-ups, should provide significant CAPEX savings.

Daily charter rates for vessels from GL Garrad Hassan demonstrate just how significant these vessel costs can be.

CAPEX for commercial floating wind projects is expected to remain higher than for conventional fixed-bottom technologies until at least 2030, as CAPEX reductions for fixed bottom projects continue for the next decade.

“We remain positive on the outlook for floating wind but we definitely recognize a cost level that is somewhat higher than fixed-bottom technology, especially around 2025,” explains Guldbrandtsen.

Water depth will be a key factor in CAPEX cost comparisons due to the increasing costs associated with fixing larger units in deeper seas.

According to WEU’s Offshore Foundations and Supporting Structures Report 2015, the CAPEX for floating foundations compares favorably when set in at water depths exceeding 45 meters, with more significant cost advantages beyond 60 meters when “floating foundations quickly surpass their technological counterparts.”

“One of the great advantages of floating wind is the possibility to tow the platforms to port for major repairs and this is the main driver for OPEX cost reductions over fixed-bottom wind farms” said Guldbrandtsen.

For example, technology developer Principle Power estimates OPEX for its WindFloat plant design is 10% lower than for fixed-bottom foundations.

Currently, not all floating designs offer the same breakthroughs. The spar-buoy, for example, offers limited potential for onshore repair owing to its large draft (the length below water level).

LCOE- the path to cost parity

The deployment of fixed bottom plants has led to a dramatic fall in plant output costs, a positive sign for the emerging floating wind sector.

In its June 2015 report, the Carbon Trust said floating wind has the potential to reach cost parity with fixed-bottom offshore wind during the 2020s as “the higher CAPEX of the platform, moorings, and anchors [is] negated by lower installation costs and lower OPEX driven by cheaper repair costs for major components.”

The Carbon Trust said floating wind farm developers estimated the LCOE of floating wind could reach 85-95 pounds per MWh in the 2020s, although some estimates have been higher. Cost projections have been estimated at anywhere between 13% higher than fixed-bottom, to 12% lower.

Statoil has said it aims to drive down the LCOE of its Hywind technology by 40 – 50% by 2030, without support regimes.

“A 50% reduction is aligned with MAKE’s in-house forecasts,” notes Guldbrandtsen, “as we expect to see LCOE levels drop significantly over the next 15 years.”

Feed-in Tariff (FIT) programs, or equivalent support measures, alongside continued research and development will be required to facilitate these cost reductions, he said.

MAKE estimates 3.4 GW of floating wind power capacity will be commissioned before 2030. The operations data from these plants will provide more clarity on the cost reduction potential of the technology and its competiveness against fixed-bottom structures.