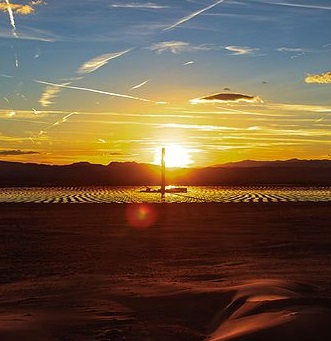 Tonopah Solar Energy, owner of the offline 110 MW Crescent Dunes plant in Nevada, has filed for Chapter 11 bankruptcy with the United States Bankruptcy Court in the District of Delaware, court documents show.

Last October, Nevada utility NV Energy terminated its offtake contract for Crescent Dunes after the plant failed to meet output expectations. Tonopah then defaulted on repayments to a $737 million loan guarantee with the Department of Energy (DOE). Since then, SolarReserve has ceased operations and contested Tonopah board placements and project vehicle structures through lawsuits.

Tonopah still owes $425 million on its DOE loan, but reached a settlement under which the department will recover at least $200 million, subject to court approval, Reuters reported.

Crescent Dunes was the first large-scale solar tower project with molten salt storage. The failure of the plant highlighted the impact of high-temperature transfer fluids on system structures.

Crescent Dunes was brought online in October 2015, a year behind schedule, and output was below target during the first year of operations. A year after start-up, the plant was shut down for eight months due to a leak in the molten salt storage system. By 2018, the average capacity factor of Crescent Dunes was 20.3% compared with a planned factor of 51.9%, according to data from the Energy Information Administration (EIA).

The failure at Crescent Dunes impacted investor confidence in CSP and developers are keen to move on from the debacle.

The backing of the Cyprus government secures 60.2 million euros ($71.4 million) of EU-level funding for the project and all basic permits have been approved, the government said. The project is due online by 2021, it said.

Developed by Alfa Mediterranean Enterprises, Eos Green Energy will be located in Limassol in southern Cyprus and will consist of a modular CSP tower system and thermal energy storage.

EU documents from 2017 indicate the plant will use technology from Australia and China.

Infrastructure fund Atlantica has refinanced its 50 MW Helios 1 and 2 parabolic trough plants in Spain, entering into a non-recourse project debt financing for approximately 326 million euros ($386.7 million), the company announced August 3. Helios 1 and 2 are located in central Spain and were commissioned in 2012.

The new arrangement will extend the tenor of debt maturity from 7 to 17 years and reduce financing costs from 4.2% per year to 1.9%/year, Atlantica said.

An early leader in CSP deployment, Spain installed 2.3 GW of CSP capacity but domestic build was halted in 2013 after the government replaced feed in tariffs with regulated asset value-based payments.

Atlantica has used the new debt for Helios 1 and 2 to repay the previous bank project debt with approximately 250 million euros outstanding, and to cancel legacy interest rate swaps. Net refinancing proceeds amounted to $30 million and Atlantica will use these to finance its growth plan, it said.

“With this financing, Atlantica is able to continue to diversify its financing sources," Francisco Martinez-Davis, CFO of Atlantica, said.

On July 17, Atlantica exercised its option to buy out the tax equity investor in the 280 MW Solana CSP project in Arizona, US for $290 million. Built by Abengoa and commissioned in 2013, Solana was the first large-scale parabolic trough CSP plant with thermal energy storage.

"Closing of the acquisition is expected to occur in August, subject to customary conditions," Atlantica said.