Transportation of hydrogen from the producer to the consumer is a key piece of the puzzle in the creation of a functioning and affordable hydrogen economy, says the International Renewable Energy Agency (IRENA). 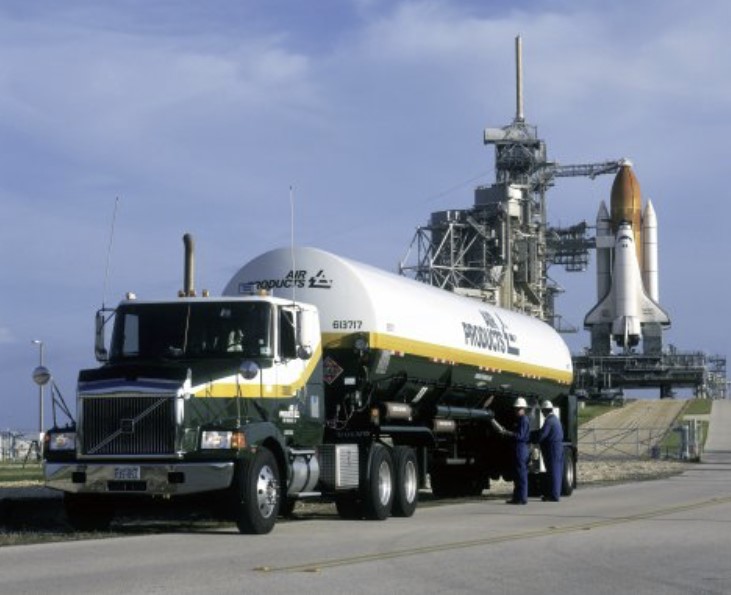 Liquid hydrogen can be transported by truck to the off-taker, but boil-off during delivery can be a problem (Source: U.S. Department of Energy)

Moving the universe’s lightest and most energy-dense (by weight) element cheaply and efficiently, is easier said than done, and the cost and efficiency of transporting the gas from electrolyzers to the off-taker, whether that be across international borders or from local wind farms, will determine how hydrogen's place in future energy markets.

Hydrogen is difficult to contain without leakage, causes embrittlement of metal casings, can be technically complicated and expensive to liquify, and loses large amounts of energy efficiency when converted to and from a compound such as a liquid organic hydrogen carrier (LOHC) or ammonia.

Many of the hydrogen transportation challenges can be addressed by significantly boosting domestic production and thereby minimizing the distance between producer and consumer.

By 2050, three quarters of hydrogen production is expected to be domestically produced and consumed, according to IRENA’s three-part review ‘Global Hydrogen Trade to Meet the 1.5°C Climate Goal’.

In the 1.5°C scenario in 2050, some 12% of the final energy demand is supplied by hydrogen with just a quarter of that, equivalent to 18.4 exajoules (EJ) or about 150 megatons (MT) of hydrogen per year, will be met by international trade, says IRENA.

Such a dynamic would turn the current international energy trade system, where around 80% of the global population lives in countries that are net energy importers, on its head.

“There are three levers to lower costs. Economies of scale has the largest impact. Another is innovation, which will improve technology performance including energy efficiency and how much energy is lost after each step, and the other is learning-by-doing which decreases costs by optimizing global supply chains and increasing the global scale,” says the author of the IRENA report Herib Blanco.

“In theory, if we follow these steps and the largest lever is there, which is economies of scale, we could reach below $1/kilo for each production and transport in the long term. So, hydrogen could be delivered in the $2/kilo range which is relatively competitive.”

In fact, economies of scale could achieve cost reductions of up to 80% by reaching the largest possible scale for each part of the value chain, the report says.

The available options – pipelines or by land or maritime transport – have their pros and cons and the most cost-effective transport solution depends upon the scale of the project and the distance the hydrogen needs to be transported. For some applications of hydrogen, as a feedstock for the steel industry for example, electrolyzers powered by nearby wind or solar farms will be built and operated on site bypassing the transportation problem completely.

Green ammonia from clean hydrogen is likely to be one of main ways hydrogen is moved as distances increase and before alternative options scale up, according to IRENA.

Moving pure hydrogen remains a challenge, so it is more cost effective to transport hydrogen in the form that it will be ultimately used including ammonia, steel and synthetic fuels. The last two, however, cannot be reconverted to hydrogen.

“The options to transport pure hydrogen are liquid hydrogen and LOHC, but firstly, the energy consumption for the conversion process is too large and secondly, all the associated equipment is expensive, liquid hydrogen in particular” says Blanco.

“Thirdly, these are still in the pilot scale, so demonstration and scale up are needed which could easily take a decade.”

Shipping ammonia, meanwhile, is relatively cheap compared to the cost of conversion to and from ammonia or storage, so longer distances have limited impact on the total cost, IRENA says.

Ammonia also has an existing infrastructure in over 120 ports and more than 10% is globally traded today providing a starting point for trade as a renewable energy carrier.

By 2030, when projects are expected to be transitioning from pilot stage to commercialization, the most attractive carriers are ammonia and LOHC with a transport cost (excluding hydrogen production) of $2.5-4.5/kg of hydrogen (for 10,000 km), says IRENA.

The cost for pipelines, meanwhile, scales as the distance increases and are seen as the cheapest option for short distances of up to 3,000 km.

“The cost of pipeline transport varies according to the flow transported – double the diameter means roughly double the cost but four times the flow, which reduces the specific cost per unit of hydrogen transported,” IRENA says.

“For this reason, the distance at which pipelines are the most attractive expands as the project size increases. In cases where repurposed pipelines are possible (eg North America, Europe or eastern China), the investment cost can be 65-94% lower than the cost of a new hydrogen pipeline.”

Many companies are already looking at repurposing existing methane pipelines for the job, with Siemens Energy claiming that gradual conversion can be done with an investment of an estimated 10-15% of the cost of new construction.

The downside of pipeline replacement is that hydrogen use must rise simultaneously with the reduction in methane use, a logistic that is hard to align geographically and in time.

Liquid hydrogen, meanwhile, is complicated because of the specialized infrastructure needed to avoid excessive boil-off and loss.

Converting hydrogen to a liquid form requires cooling it to near absolute zero, or -253°C, which IRENA estimates takes between 30-36% in energy spent of all the energy contained in the hydrogen being liquified.

Finally, LOHC, or oil derivatives based on hydrogen, faces a number of challenges including losses over reuse, LOHCs are relatively low in hydrogen content (or just 4-7% by weight), and the need for heat (equivalent to 30-40% of the energy contained in the hydrogen) to recover the gas from the carrier.

As such, sustainable pathways for the carriers are yet to be proven.

Beyond production and transportation costs, the so-called soft factors behind an economy’s conversion to hydrogen may be the deciding reason for the gas’ success or failure in any given country.

High density populations with limited free land, a lack of sun or wind, low levels of the necessary investment, public support, government commitment and stability, and a lack of the necessary financing and investment, amongst others, all play into whether hydrogen is taken up in a significant manner, says IRENA. 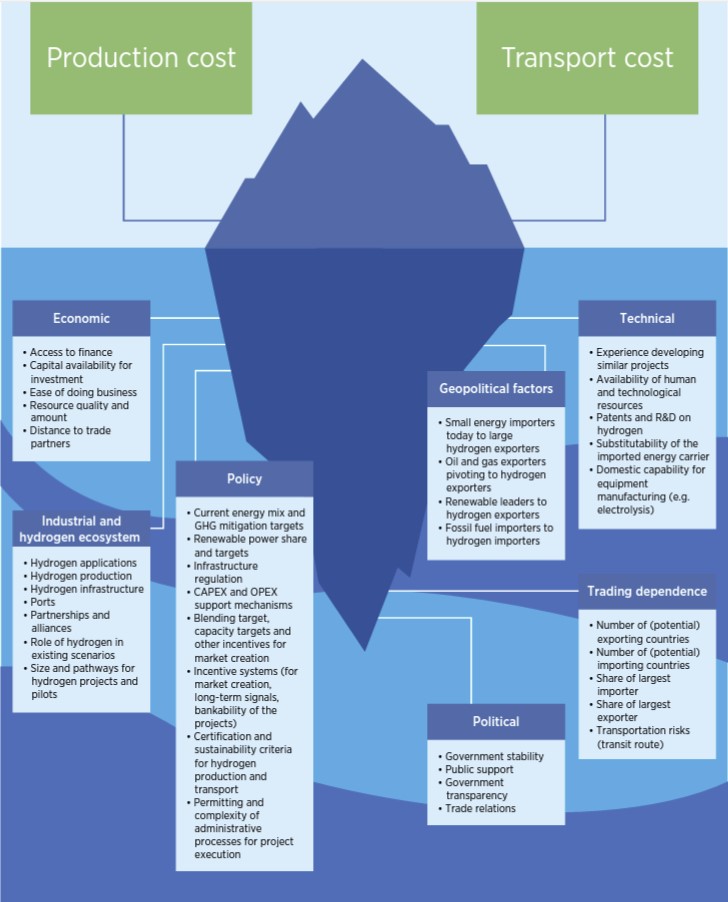 “Most people focus their attention on transport and production costs, but all of those factors below the iceberg will mostly define how the trades looks in the future. If we reach the low-cost targets through innovation, economies of scale, and through global learning, the transportation costs and production costs won’t be the determining factor,” says Blanco.