Hydrogen production from renewable and clean-energy sources can be achieved on a large scale, but the size and cost of the technology and the electricity generated to run it must show exponential improvements over coming years for it to be technically and economically viable. 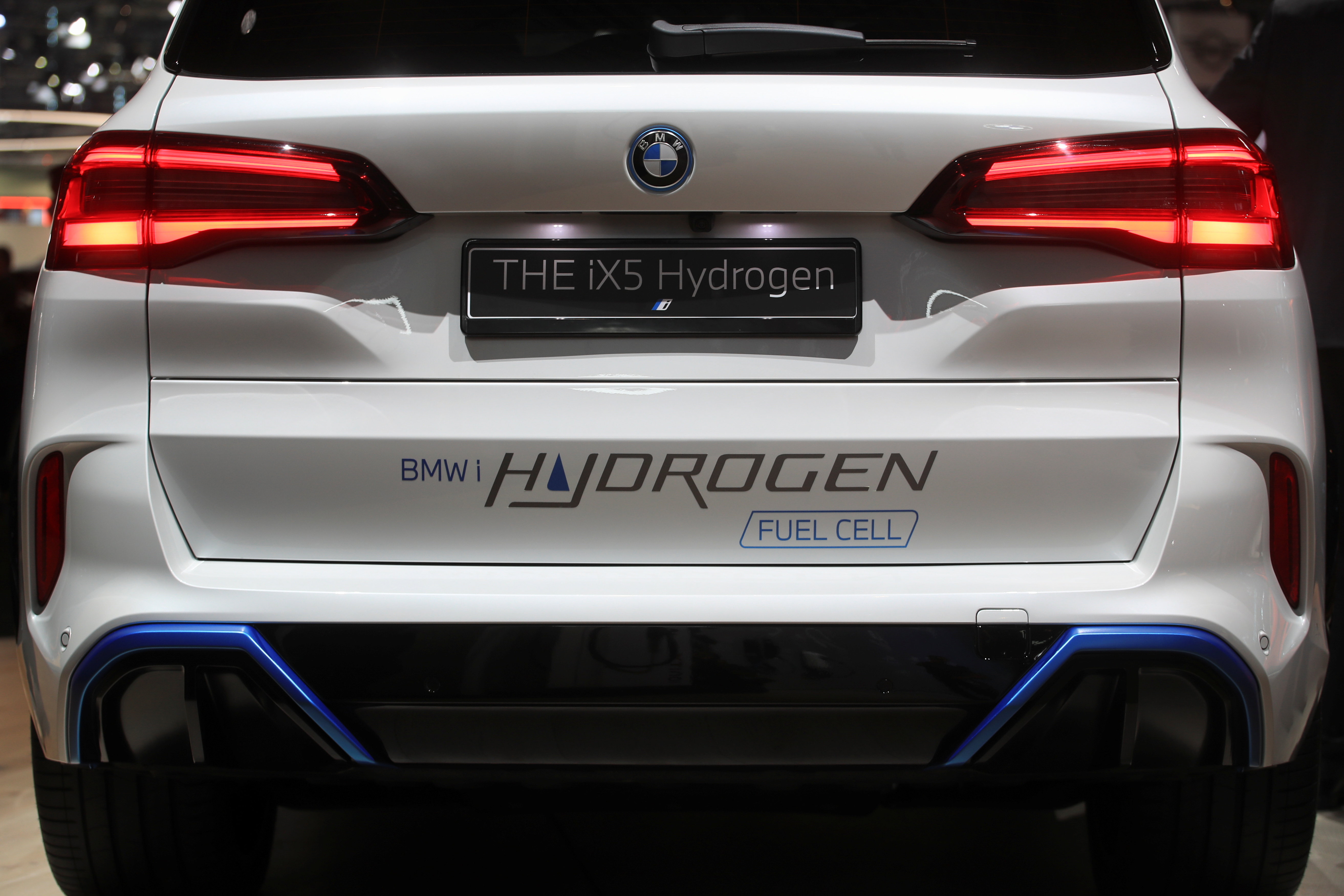 The capacity and cost of electrolyzers, the zero-carbon-emitting power generation needed to feed them, and the shape, weight, and capacity of fuel cells powered by hydrogen all need major and urgent upgrades.

More than 350 large-scale hydrogen projects exist across the value chain and, if they come to fruition, total investments will top $500 billion in hydrogen spending, with announced capacity of over 10 million tons of hydrogen, just through to 2030, according to the July “Hydrogen Insights” report from Hydrogen Council and McKinsey.

The Hydrogen Council’s vision is impressive: hydrogen would enable the deployment of renewables by converting and storing more than 500 TWh of otherwise curtailed electricity, will power more than 400 million cars, 15-20 million trucks, around 5 million buses, a quarter of passenger ships, a fifth of locomotives, and a share of airplanes and freight ships by 2050.

“On a company level, members in the Hydrogen Council are planning a sixfold increase in their total hydrogen investments through 2025 and a 16-fold increase through 2030,” the report said.

Some of that money will go toward upscaling of electrolyzer capacity which today is woefully inadequate at around 200 MW worldwide.

Any sizeable transition to hydrogen through an aggressive deployment of electrolyzers will need a global capacity closer to 270 GW by 2030, a more than thousand-fold increase, and as much as 1,700 GW by 2050, according to the International Renewable Energy Agency (IRENA).

“This necessitates a rapid acceleration in the industrialization of electrolyser manufacturing,” IRENA said in a 2020 study ‘Green Hydrogen Cost Reduction’.

Roughly 65 GW of electrolysis capacity are needed to bring costs down to break-even with ‘grey’ hydrogen under ideal conditions, implying a funding gap of about $50 billion for these assets, says the Hydrogen Council.

The relatively simple mechanics behind an electrolyzer means that hydrogen proponents believe, just like solar power, the technology will grow at an exponential rate – with production capacity seen by the International Energy Agency (IEA) as rising by 1.5 GW/year by 2023 – and, as they become more prolific, the price will drop equally rapidly.

Today, hydrogen can be produced via polymer electrolyte membrane (PEM) electrolyzers at a cost of around $5-$6 per kilo with existing technology, according to a U.S. Department of Energy analysis.

The U.S.’s Hydrogen Shot Summit earlier in September called for a “1 1 1” goal – $1 per 1 kilo in 1 decade – and many believe that this is possible if electrolyzer capacity scales as it needs to, and the cost of the technology drops sharply, just as it has in solar panels, batteries, and offshore wind over the last ten years. 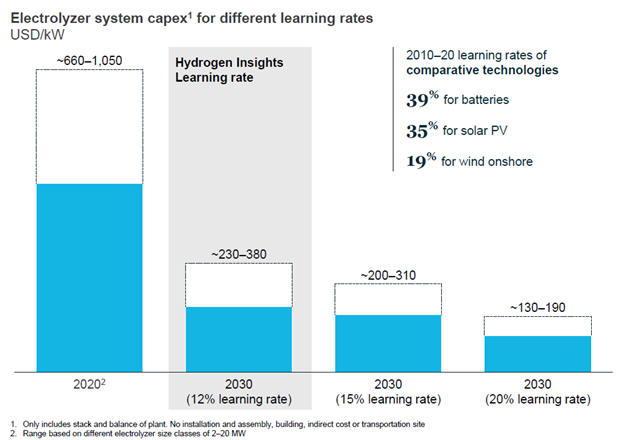 Source: “Hydrogen Insights” from the Hydrogen Council and McKinsey & Company.

Of course, electrolysers only produce hydrogen when electricity is passed through them, and it is the level of electrification that will be needed to power them that also poses a serious challenge to the hydrogen dream, especially since that electrification must come from non-carbon emitting sources.

Canada’s own strategy is a good illustration of how an economy’s shift to hydrogen would need a very large-scale increase in electricity generation.

Canada would need to massively ramp up its electricity generation with end use electricity expected to account for 35% or Canada’s primary energy demand in 2050 from 15% in 2017, according to a Transition Accelerator white paper out of the University of Calgary, “Towards Net-Zero Energy Systems in Canada; A Key Role for Hydrogen.”

The paper sees hydrogen as an energy carrier for around 27% of Canada’s primary energy demand by 2050, equivalent to 64,000 tons of hydrogen a day.

Just to meet increased demand for direct-use electricity by 2050, Canada requires 700 TWh/year of new, low-carbon electricity, on top of the around 400 TWh/year currently being pumped into the national grid.

To create 64,000 tons of hydrogen a day from clean, non-emitting, electrical power, the Canadian power sector would need to generate another 1,054 TWh/year, with all of that extra power dedicated to hydrogen production.

Increasing Canada’s electricity generation capacity by more than five times, using only non-emitting power sources, is a big ask, especially when this same feat must be replicated throughout the world for a global hydrogen economy to be created.

Significant export market potential could easily double the demand for Canada’s zero-emission production, generating a wholesale market potential for hydrogen of up to $100 billion a year, the report said.

Global average levelized cost of hydrogen production by energy source and technology, 2019 and 2050 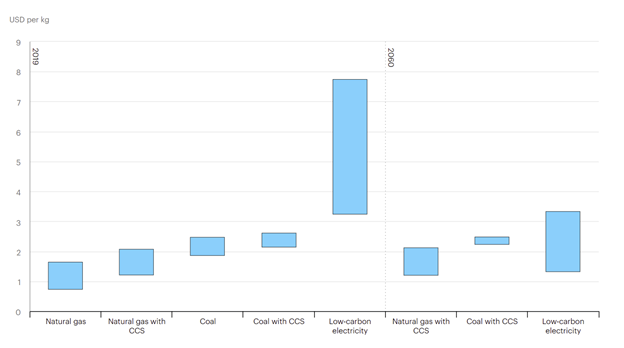 The wisdom of fuel cells

In a hydrogen economy, much of the gas will be used to store and produce electricity through fuel cells, a baseload against the intermittency of renewable energy, and the development of these will also require major upgrades to be of use.

The utility and efficiency of fuel cells is already up for debate and is a system Elon Musk has, unhelpfully, written off as “fool cells” and “mind-bogglingly stupid.”

Electric vehicles running on lithium-ion cell batteries, such as Musk’s Tesla range, have grown in popularity in recent years, likely edging out hydrogen fuel-cell batteries for private cars, though leaving space for other transport.

HyPoint is working on a fuel cell to power aircraft and its founder and CEO Alex Ivanenko says that there is no reason hydrogen-powered fuel cells should have to compete with lithium-ion batteries at all, though there are areas where fuel cells are a better fit.

“No battery power that exists today can get airborne vehicles off the ground and keep them in the air for long enough to make them fly for anything more than very short distances. And that’s what HyPoint has invented,” says Ivanenko.

“When we’re talking about Uber, or taxis, or business to business application – deliveries, for example – lithium batteries don’t work because you have to spend many hours to recharge the battery. The process for filling a hydrogen car is the same as for a petrol-fueled car.”

While the Hydrogen Council’s vision may seem near impossible today, they have the support and money to drive a sea change in how we power our industrialized world with the 18 steering members of the Hydrogen Council, representing companies with a combined market capitalization of more than $1.15 trillion, working with them.

“We believe the world cannot afford to put off the efforts required to reach our common goals of deploying hydrogen and limiting global climate change as agreed in Paris in 2015. We hope to accelerate this transformation and are looking forward to investors, policymakers, and businesses joining us on this journey,” the council says.