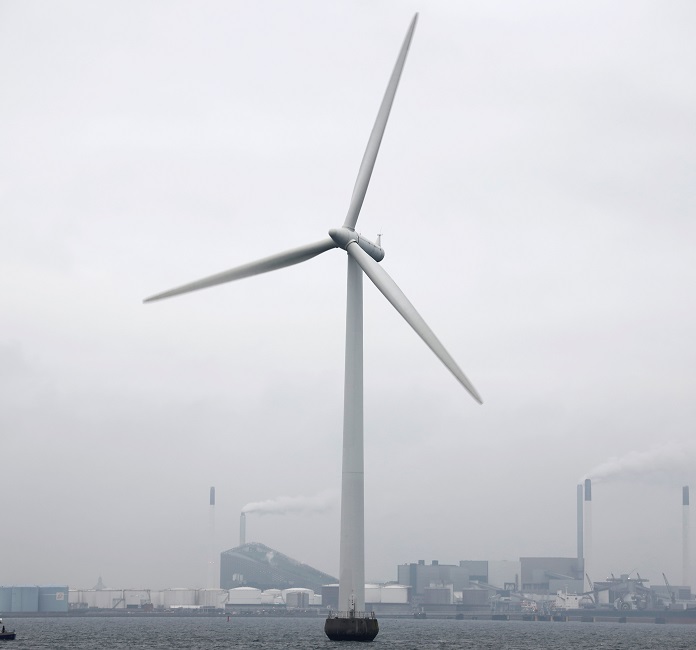 The UK is looking to use its lead in offshore wind to accelerate green hydrogen production. (Image credit: REUTERS)

The UK government has set a target of 5 GW of low-carbon hydrogen capacity by 2030 and plans to publish a national Hydrogen Strategy within weeks. Private consortiums are rolling out the first commercial-scale green hydrogen projects that will pave the way for larger installations.

The production cost of green hydrogen is currently far higher than traditional gas reforming but experts predict costs will fall as larger projects are deployed. In particular, the cost of electrolysers will fall on technology innovations, economies of scale and manufacturing advances.

To drive down costs, the UK needs to support technology innovation and the scaling up of project sizes while also establishing hydrogen infrastructure and market regulations, David Wallace, Senior Strategy Manager at the ORE Catapult offshore wind research centre, said.

Support should include government funding for test centres and pre-commercial demonstration projects and measures that offset deployment risks for the first wave of projects, he said.

The first wave of commercial-scale electrolysers is expected to be deployed near industrial groups keen to reduce carbon emissions, such as refineries, steel plants and chemical complexes.

In the UK, offshore developer Orsted has partnered with electrolyser supplier ITM Power and refinery operator Phillips 66 to develop a 100 MW electrolyser system in the Humber on England’s North Sea coast. The ‘Gigastack’ project will use Orsted's Hornsea Two offshore wind farm to produce hydrogen for the Humber Refinery in a bid to identify regulatory, commercial and technical challenges for industrial-scale green hydrogen.

As part of this second phase, ITM Power will install and trial its latest electrolyser design that will reduce costs and increase the output for a given footprint. It will also test semi-automated manufacturing machines.

“Today’s technology consists of a 2 MW module comprising 3 stacks, while a Gigastack module is of similar footprint but is rated at 5 MW and comprises only 2 stacks," Marcus Newborough, Development Director at ITM Power, told Reuters Events.

"The overall effect is to reduce the electrolyser cost [in pounds/MW] by approximately 50%. Part of that cost reduction is due to the adoption of semi-automated manufacturing processes."

In January, ITM started production at a new 1 GW/year electrolyser factory in Sheffield. The company has raised sufficient capital to build a second factory and plans to expand its capacity to 2.5 GW/year by 2025 at the latest, Newborough said.

In Sweden, the H2 Green Steel consortium plans to build an 800 MW electrolyser - the largest ever developed - at a new production facility in Boden. Sweden generates most of its power from hydroelectric and nuclear plants, and a rising portion from wind energy.

Due online from 2024, the Boden facility will replace coking coal with green hydrogen as the energy supply. The plant will produce 2.5 million tons/year of "green steel" and this will be expanded to 5 million tons/year from 2030, the project partners said.

More research is needed to determine whether it is cheaper to produce hydrogen onshore, or offshore on turbine or substation platforms and then transport it to shore in pipelines. ITM Power is working with Orsted, Siemens Gamesa Renewable Energy and Element Energy to develop a "cost effective autonomous electrolyser" that would be integrated with an offshore wind turbine, Newborough said. Later this year, the partners will start testing a MW-scale pilot system, located shoreside, and plan to complete the tests in 2024.

ITM Power is also developing projects for onshore wind farms. The group will supply a 20 MW electrolyser to ScottishPower's Whitelee wind farm in Scotland. ScottishPower has submitted a planning application for the green hydrogen facility and additional solar and battery storage systems and first hydrogen production is expected by 2023.

The Scottish government is looking to get ahead of the rest of the UK on green hydrogen policy. In December, the government pledged to invest 100 million pounds in hydrogen over the next five years and will publish its own national hydrogen action plan later this year.

To accelerate deployment, the UK must implement measures that support green hydrogen production and bring buyers and sellers of green hydrogen closer together.

Issues which must be resolved include how to incentivise and incorporate green hydrogen production within the power network and how to use seasonal electricity surplus to store green hydrogen at scale, Newborough said.

UK energy regulator Ofgem is expected to soon increase the amount of hydrogen operators are allowed to inject into existing gas networks to 20%, compared with less than 1% under current regulations. This follows a successful demonstration in an isolated pipeline network at Keele University.

The UK is also rolling out early projects for green hydrogen home heating. In Levenmouth on Scotland's eastern coast, 300 homes will be fitted with hydrogen boilers, heaters and cooking appliances in what is reported to be the first ever demonstration project of its kind. By 2023, green hydrogen will be supplied to the homes from a 7 MW offshore turbine operated by ORE Catapult. The project is being funded through a mixture of Scottish government grant funding and an Ofgem-controlled network innovation award (‘NIC’).

The UK government's Hydrogen Strategy could include a contract for difference (CFD) system for low carbon hydrogen to incentivise commercial-scale projects. Already offered to renewable energy projects and a key driver of UK offshore wind growth, CFDs provide projects with a guaranteed revenue at an agreed strike price.

The government has consulted with green hydrogen stakeholders on both the "option of a variable premium or CFD,” BEIS told Reuters Events.

Unlike some countries, the UK has set out targets for low carbon hydrogen, rather than green hydrogen.

According to experts, support measures must distinguish between green hydrogen and lower-cost blue hydrogen projects to avoid delaying progress towards net zero. The government must decide how best to "wind down blue hydrogen production in the medium term," Newborough said.