High-level industrial adoption of green hydrogen won’t come before the challenges of electricity supply and storage are solved, say researchers and analysts. 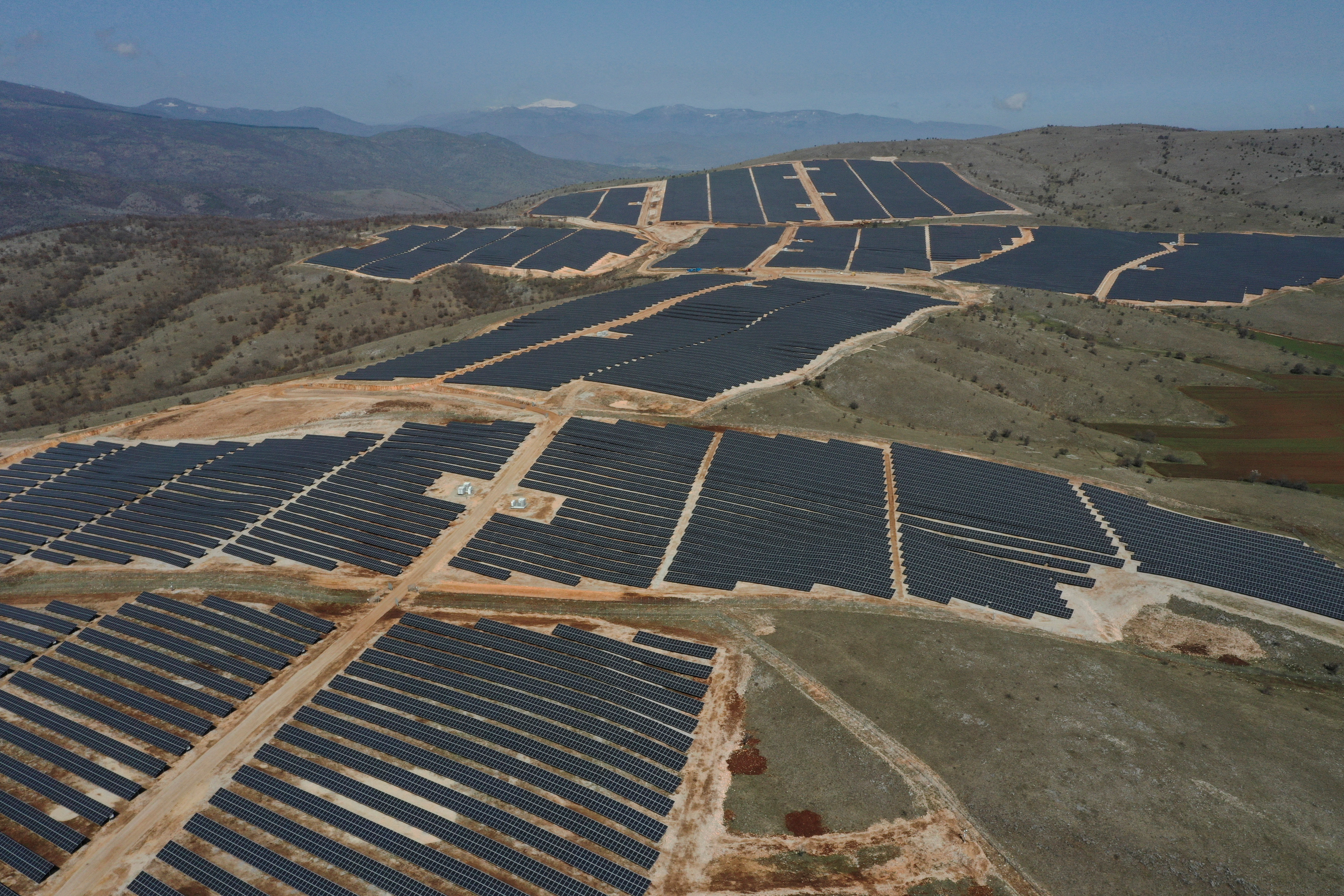 Vast amounts of emission-free electricity will be needed to fuel a new hydrogen economy. Above, a photovoltaic park in Greece. (Source: Reuters/Alexandros Avramidis)

Hydrogen demand is projected to grow fivefold by 2050, driven primarily by road transport, maritime, and aviation, while supply is projected to shift to 60% clean production by 2035 from nearly 100% grey hydrogen currently, according to McKinsey & Company’s ‘Global Energy Perspective 2022’.

Under the ‘Further acceleration’ scenario, which McKinsey’s report posits as the most likely path and global temperature increases linked to emissions are seen as 1.9 C, the energy transition will be driven by country-specific commitments, while financial and technological restraints remain.

Hydrogen is expected to play an important part in the transition away from polluting fuels such as coal and oil, however the report's authors warned that the gas will not be the ultimate solution to curbing carbon emissions.

“While hydrogen is important, there’s a lot of different levers for decarbonizing. As we look at what it will take to decarbonize, you have to increase energy efficiency, massively expand renewables to decarbonize electric end-uses, and then use hydrogen and carbon capture, and then there still might be fossil natural gas with either emissions captured or negated somewhere else in the economy,” says McKinsey & Company Associate Partner Gracie Brown.

“Most of our solution sets require all the levers – just in different amounts with unique recipes depending on the geography and resources. Heavy electrification is also going to be a part of it, so hydrogen is not the panacea to decarbonization.”

Today, dedicated production of hydrogen from electrolysis is just 30,000 tons a year, or around 0.03% of all hydrogen produced, due to the relatively more expensive production method, according to the International Energy Agency (IEA).

Clean hydrogen production is low because it is expensive – $3-8/kg versus $0.5-1.7/kg using fossil fuels – and closing the gap will require a drop in electrolyzer and low-carbon electricity costs as well as an increase in load factors.

Producing all of today’s dedicated hydrogen output from renewable electricity via electrolyzers would require some 3,600 TWh, more than the total annual electricity generation of the European Union, the IEA says.

The massive task ahead is not unprecendented however.

Green hydrogen in Europe is expected to scale to around 15% of the energy mix within the next 30 years, and while this will require political and industrial coordinated efforts and enormous investments, natural gas faced a similar challenge when it was first introduced more than fifty years ago.

“In 1950 and 1960, natural gas hardly existed, and you had this exact discussion, the exact same chicken and egg problem,” says head of McKinsey’s Global Energy Perspective team, Ole Rolser. 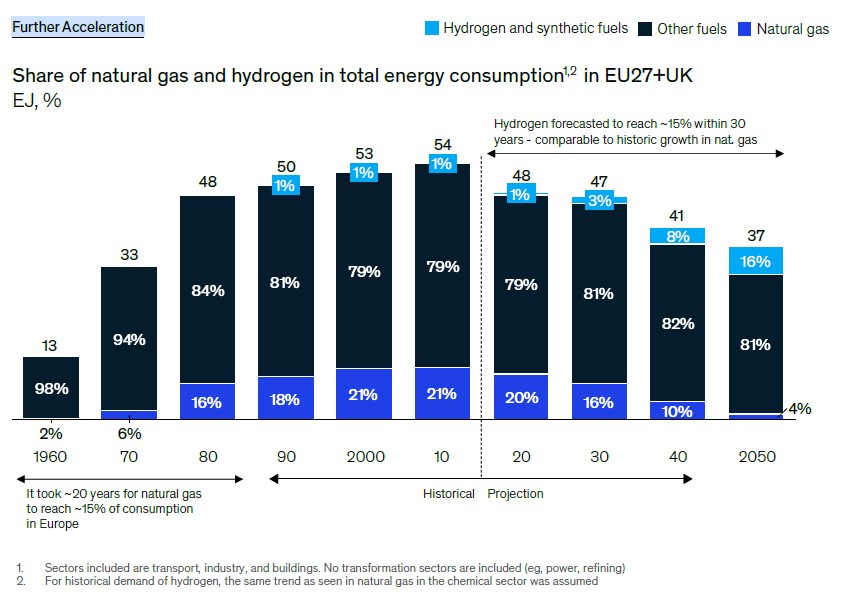 Mass adoption of hydrogen in place of natural gas is complicated by the difference in the two gases' chemical composition, meaning a one-to-one swap, using the same pipelines and storage techniques, is not technically feasible without important and expensive retrofitting.

The path to viable, safe, reliable, and pure and blended hydrogen storage possibilities is the focus of a team of three U.S. National Laboratories.

“We can learn a lot from the natural gas industry. In California, gas is stored in a variety of ways; there are big surface tanks and the pipeline network, but the largest volume storage is in underground gas reservoirs,” says Technical Lab Lead at Lawrence Livermore National Laboratory Joshua White.

By blending hydrogen with natural gas in the existing systems, current infrastructure can be reused and demand centers can be fed, but blending will only take you so far, says White.

“It has pros and cons. It’d be easy to do, but there are questions about the percentage of hydrogen current infrastructure can handle,” he says.

Using existing infrastructure is generally accepted with a blend of 5%, and maybe up to as much as 20%, of hydrogen in existing natural gas pipelines.

The SHASTA project plans to look at exactly how different blends and pure hydrogen interact in new and existing subsurface infrastructure, asking questions such as, if a customer wants to inject a 20% hydrogen/80% natural gas blend into a reservoir, how will the hydrogen impact the safety of the storage reservoir, and will they be able to maintain that blend ratio?

Similarly, pure hydrogen storage brings up its own questions, such as whether impurities could degrade the quality of the hydrogen that would then need to be cleaned up before it can be used in a fuel cell and how hydrogen will react with cement, steel and reservoir rock at different temperatures and different pressures.

“If you are going to be injecting hydrogen on a regular basis, we’re going to need to look at the chemical effects. There’s consequential science that we’re addressing that hasn’t been previously examined,” says Goodman.