Improved technology and installation practices are driving down CSP costs and rapid expansion in China and the United Arab Emirates (UAE) will accelerate cost reductions in the coming years, experts said at the MENA New Energy 2017 conference on April 25-26. 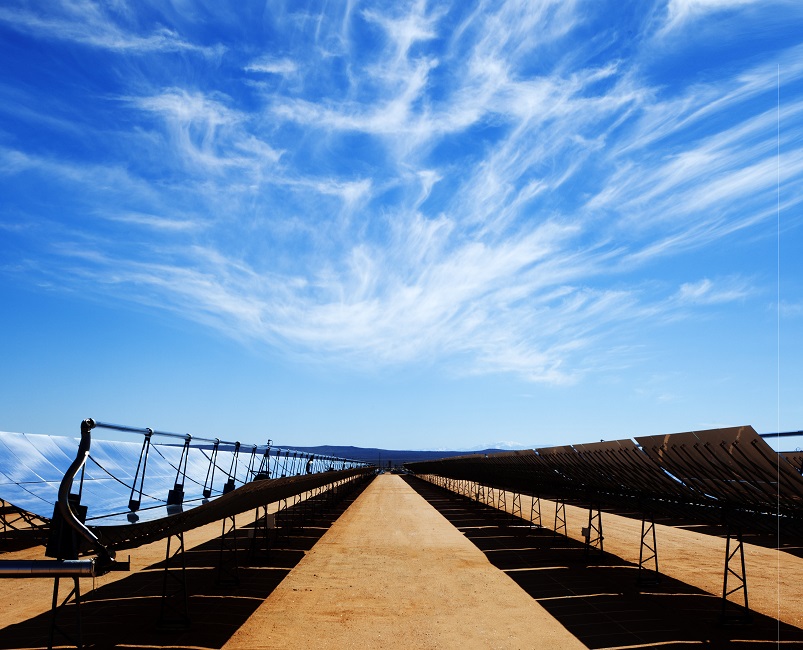 The CSP industry faces increasing competition from PV and wind projects in the coming years and China and UAE will play key roles in driving down CSP costs.

China plans to build 1.3 GW of CSP capacity by 2018 in a first batch of 20 CSP projects which includes nine solar towers, seven parabolic trough plants and four Linear Fresnel plants. In the Middle East, the UAE city of Dubai has also set out ambitious CSP targets, pledging to build 1 GW of CSP by 2030 and launching a tender for its first 200 MW solar tower plant in January.

China’s first batch of projects must be completed by the end of 2018 to be eligible for the Feed-in-Tariff (FiT) of 1.15 yuan/kWh ($170/MWh). Chinese deployment efficiencies will soon feed in to other markets, Xavier Lara, executive director at engineering organization Empresarios Agrupado, told New Energy Update.

“China’s demonstration projects represent roughly one-fourth of global installed CSP capacity and they plan to connect them to the grid by end of 2018. This will certainly lower prices,” Lara said.

The International Renewable Energy Agency (IRENA) has predicted the levelized cost of energy (LCOE) for CSP solar towers could drop by 43% to around $80/MWh by 2025. However, Dubai has targeted a cost of $80/MWh for its first tower project-- expected online by 2021-- and gains in other countries show lower costs are possible.

“Developers have already done better than this,” said Ranjan Moulik, global head of power and renewables at Natixis, which has financed 11 CSP projects in Spain and the UAE. 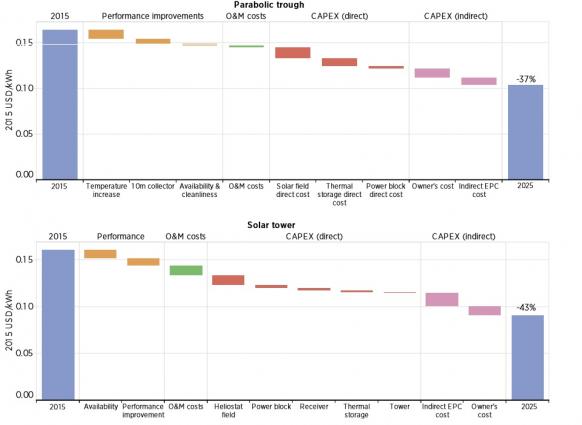 Prices of CSP equipment in China, including steam turbines, generators and receivers are already falling faster than in MENA and western markets, said Lara, whose company is working with several CSP developers in China.

The creation of a domestic CSP industry will allow Chinese EPC contractors to export their expertise and this will further reduce costs, he said.

“This will please developers and offtakers in the [Middle East and North Africa] region because it will cut prices dramatically,” Lara said.

China is expected to follow the first 1.3 GW CSP deployment round with another wave of projects. The Chinese authorities set a target of 105 GW of PV by 2020 and rising PV capacity will require additional dispatchable power and storage capabilities offered by CSP plants.

Rising wind and PV capacity is increasing the need for generation assets that can dispatch power on-demand to balance grid networks. CSP developers must concentrate on lowering storage costs to compete against gas-fired generation and the falling cost of PV plus battery systems.

Dubai is currently planning to build 5 GW of solar capacity at its Mohammed bin Rashid Al Maktoum solar park by 2030. Most of this capacity will be PV but this means CSP capacity will also be required to provide night-time power supply, Taher Diab, strategy & planning director at the Dubai Supreme Council of Energy (SCE), said.

“It is huge. We’re going to reach some days in 2040 or so when we’ll see an abundance of energy. Therefore, we need storage technology so we can store energy during the day and use that at night without having to use gas turbines, in addition to shaving the peak that takes place in the daytime,” Diab said.

The Dubai authorities have specified that the 200 MW solar tower plant currently out to tender must be able to generate power from 4 pm to 10 am, requiring eight to 12 hours of thermal energy storage.

“We believe energy storage will deliver tangible results at least in the short term and we should see a difference when scaling up storage for 150 to 200 MW of installed [solar] capacity,” Diab said.

Around 4 GW of PV capacity and 1.3 GW of CSP capacity is currently under development in the Middle East and North Africa (MENA) region, according to a report by the Middle East Solar Industry Association (MESIA) published in February. UAE and Morocco have been front-runners in solar power development but countries such as Saudi Arabia and Kuwait are accelerating deployment to diversify away from hydrocarbons. Last month, Saudi Arabia's newly-created Renewable Energy Project Development Office (REPDO) said it plans to build 1 GW of CSP capacity by 2023.

Morocco is looking to install around 4 GW of wind and solar power by 2020 and has taken a different approach to UAE in its CSP and PV deployment, Georgio Akiki, Middle East business development manager at EPC contractor Sener, noted.

“We’re starting to see a trend of hybridizing between PV and CSP. In some cases, it’s done in different phases, such as in the UAE, where we have large capacities of PV coming online and CSP has to complement the load profile and smooth the transients,” Akiki said. In other cases, such as Morocco’s 400 MW Noor Midelt solar complex, PV and CSP is being deployed in the same phase, he noted.