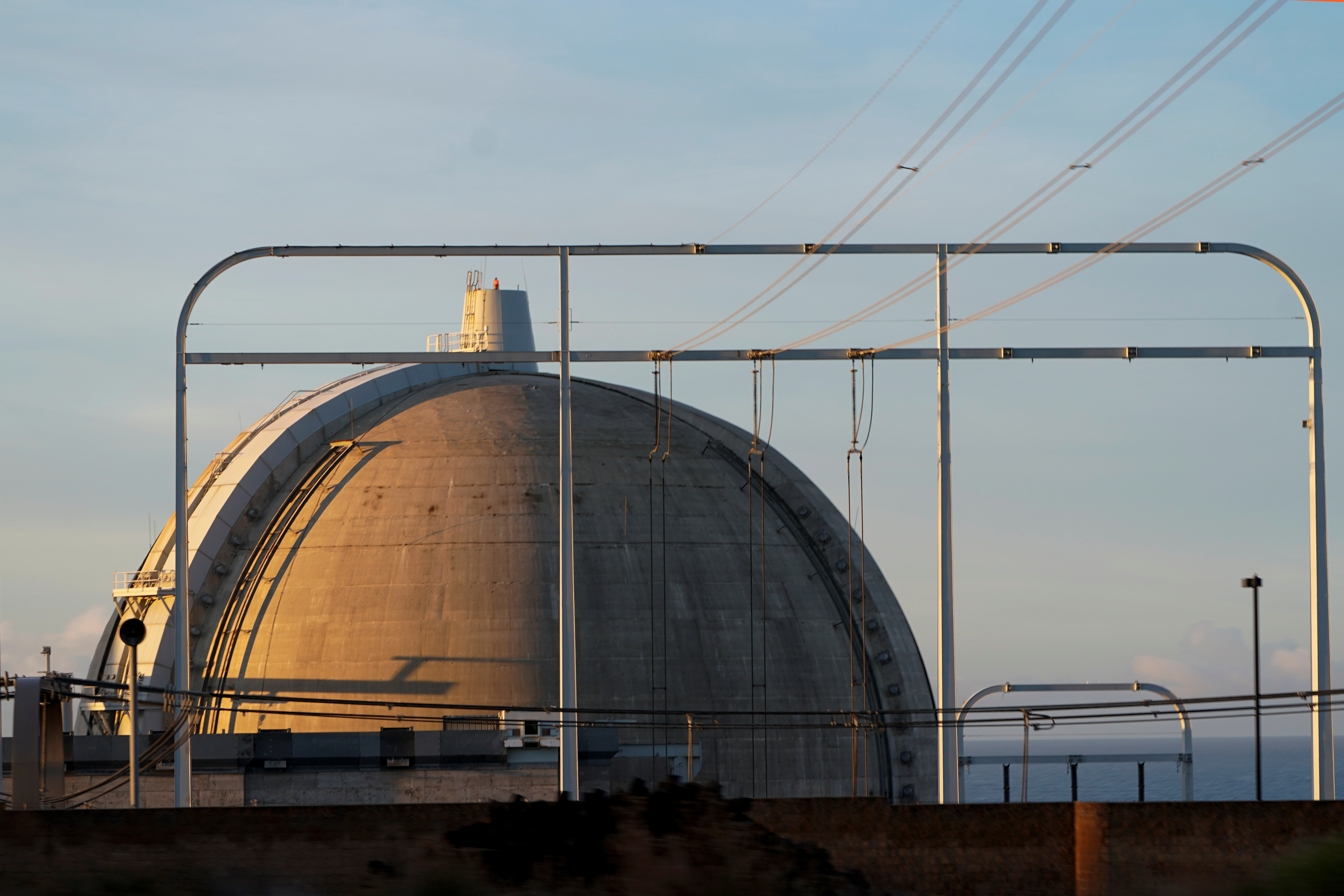 One of the two now closed reactors of the San Onofre nuclear generating station is shown at the nuclear power plant located south of San Clemente, California. (Source: Reuters/Mike Blake)

The program, which aims to see the development of two fully-functioning, commercially viable advanced reactors in the next five to seven years, has picked TerraPower and X-Energy to receive a total to $160 million in initial funding, the DOE announced in October.

In recent years the United States has accelerated efforts to reinvigorate its flagging nuclear industry as the existing fleet nears the end of its operation lifetime, increasingly extreme weather events add pressure to cut carbon emissions and the country’s strategic influence in the global energy sector wanes before Russia and China.

“The two designs selected are innovative in nearly all aspects, have promise for applications beyond just electricity production, have a reduced spent-fuel profile, can potentially lead to modifications that meet particularized needs, show promise for competitive pricing, and are led by highly competent and proven leadership teams,” says President and CEO United States Nuclear Industry Council Bud Albright.

“What we stand to gain in medical advances, space propulsion systems, and, yes, zero-carbon-emitting electricity generation is likely to be among the greatest beneficial scientific advances in multiples of decades.”

The ARDP is comprised of three separate pathways aimed at supporting advanced reactor designs, with the demonstrations first, followed by the risk reduction for future demonstration awards, which supports 2-5 reactor designs that have a commercialization horizon of around five years longer than the demos, and advanced reactor concepts, supporting at least two other designs due after another five years.

The DOE plans to invest $3.2 billion in the ARDP over seven years, subject to the availability of future appropriations which are widely expected to continue due to bi-partisan enthusiasm for the country’s nuclear program, while the selected companies will provide matching funds.

Around 60% of all nuclear power reactors in the world today are Pressurized Water Reactors, (PWRs), which use light water for neutron moderation and reactor heat removal. Of the 95 nuclear power plants to have been built in the United States, the vast majority (64) are PWRs and the rest Boiling Water Reactors (BWRs).

In contrast, TerraPower’s Natrium is a sodium-cooled fast reactor while X-Energy is a high-temperature gas-cooled reactor.

The Natrium reactor, built by the Bill-Gates-founded TerraPower with its technology co-developer GE Hitachi Nuclear Energy (GEH) and engineering and construction partner Bechtel, is different from many existing designs because it includes a molten salt energy storage system and already enjoys accords with a number of utilities including PacifiCorp, a subsidiary of Berkshire Hathaway Energy, Energy Northwest and Duke Energy.

The utilities “will collectively provide their valuable expertise in the areas of licensing, operations, maintenance, siting and grid needs,” the company says in a statement.

The molten salt thermal storage addition to the plant means the baseload output from a 345 MWe sodium fast reactor can be used to increase output during peak demand to up 500 MWe for more than five-and-a-half hours, perfect for installation alongside solar and wind power installations that struggle with intermittency problems.

“There’s been a lot of work on molten salt storage and it turns out that if you take some of those systems and combine them with a sodium fast reactor you have a really great solution, an elegant solution,” Chris Nolan, Vice President of regulatory affairs at Duke Energy Corporation, said recently during a webinar hosted by ClearPath looking at the technology.

Through efforts to separate the active nuclear reactor itself with the auxiliary buildings around the reactor – all of which can be constructed with standard materials and methods, side-stepping the often lengthy and expensive nuclear licensing, regulations and restrictions – the plant can be sold to utilities for under a billion dollars, the company claims.

“There’s some really novel concepts in the design, but they’re also coupling it with a molten salt thermal storage system so you can take advantage of not only electrons that are produced but also the process heat and that molten salt medium would be used to store heat for other uses,” says Idaho National Laboratory (IDL) Director Mark Peters.

The X-Energy Xe-100 small modular reactor (SMR) meanwhile is a 80 MWe reactor that can be scaled into a modular power plant of a four-pack 320 MWe power plant, or larger, and is small enough to be deliverable by existing road or rail directly to a utility’s site.

The Xe-100’s 200 MW thermal output and 565°C steam temperature means it can also be used for industrial process steam applications, providing a flexibility for utilities on how they use the plant including hydrogen production, while the company aims to cut costs through underground construction, the use of pooled off-site resources and a simplified passive safety system.

The award is just the latest financial backing from the DOE for X-Energy for this reactor. In 2016, the company won a 5-year $40 million funding grant for the Xe-100 and in 2018, the DOE granted $9 million cooperative agreement for the design and license application development of TRISO-X, a cross-cutting, high assay low enriched uranium (HALEU) fuel fabrication facility.

The DOE awarded the company a further $3.5 million last year for a project to reduce construction and maintenance costs of the reactor's design.

Fuel on a commercial scale

Both proposals will run on HALEU – which has a uranium enrichment of up to 20% compared to up to 5% for fuel used with the current fleet of reactors - and have made provisions to secure the fuel, which does not commercially exist in the United States.

According to the Nuclear Energy Institute, the advanced reactor industry, which is relying on HALEU as it allows for longer life core and increased efficiencies, will need more than 425 metric tons of HALEU by 2030.

In September, TerraPower said that if it were selected for the ARDP, it would work with Centrus Energy to build commercial-scale capacity to produce HALEU production and fabricate it into metal fuel assemblies.

Centrus is currently working to deploy 16 of its AC-100M centrifuges to demonstrate HALEU production in a three-year cost share contract with the DOE.

X-Energy is manufacturing its own proprietary version of TRi-structural ISOtropic (TRISO) particles at the DOE’s Oak Ridge National Laboratory. TRISO coated fuels have a uranium kernel coated with three layers of pyrolytic carbon and one layer of silicon carbide, encapsulating all product radionuclei and can withstand very high temperatures without melting.

The Nuclear Regulatory Commission meanwhile is working overtime to make sure its own regulations reach beyond the current generation of LWRs and can encapsulate the new advanced reactors under development.

The ARDP is an opportunity for the NRC to adjust to the new wave of upcoming reactors, according to Niko McMurray, Nuclear Program Director at ClearPath and previously a materials engineer at the NRC focusing on new and advanced nuclear reactors.

“It’s going to be a challenge for the NRC though they have been preparing for the last several years. The ARDP is an opportunity for them to review and license two advanced reactors which also will help the broader industry when they review other designs,” he says.

“They’ve been looking at the regulations and modernizing them to make sure that they can review something that looks different from an existing large light-water reactor.”