Many in the nuclear industry see waste as a recycling opportunity, with an increasing number of advanced reactors powered with reprocessed waste, or safe in storage for the foreseeable future, but some are looking for more permanent disposal solutions. 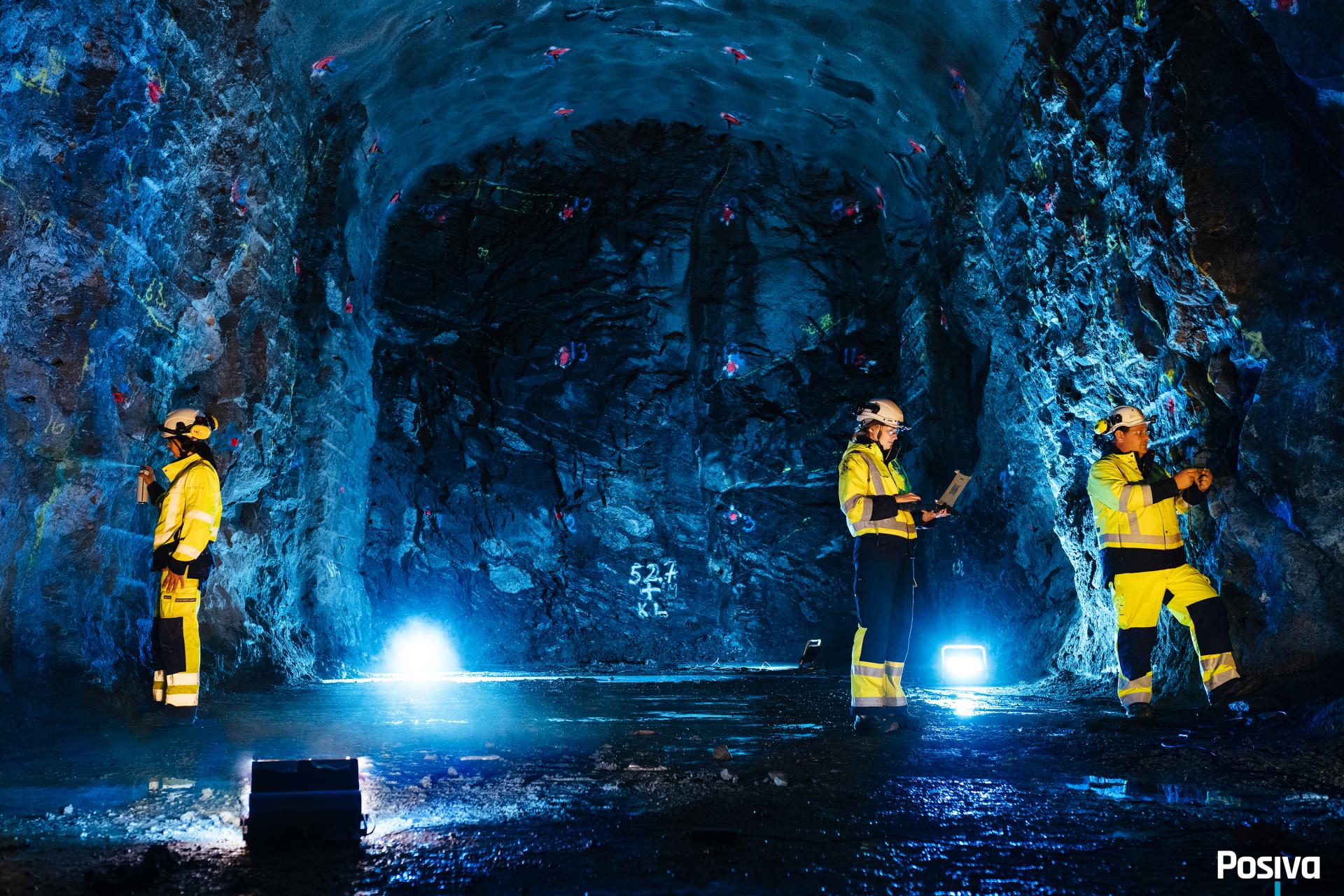 There has been some 370,000 metric tons heavy metal (t HM) of spent fuel, considered high-level waste (HLW), produced by the civil nuclear industry, of which 120,000 t HM has been reprocessed, according to figures by the International Atomic Energy Agency (IAEA).

Significant progress is being made globally in formulating national policies and strategies on what do with the waste, the IAEA says, however public acceptance is crucial, and programs are seen to be progressing slowly in most places while they are stalled in many others.

Deep geological disposal, where the waste is deposited at depths between 250-1,000 meters for mined repositories, or 2-5 kilometers for boreholes, is the preferred option for a final resting place for HLW for many countries, including Argentina, Australia, Belgium, Canada, Czech Republic, Finland, France, Japan, the Netherlands, Republic of Korea, Russia, Spain, Sweden, Switzerland, Britain, and the United States.

However, worldwide, the only purpose-built deep geological repository to hold a license for the disposal of nuclear material is the Waste Isolation Pilot Plant (WIPP) in the United States, though that can only handle nuclear material from defense-related transuranic (with an atomic number over 92) waste and not used fuel or HLW.

Also in the United States, the Yucca Mountain site in Nevada has been designated to site a deep geological repository for disposal of HLW, but the plan has faced political and social opposition and, in 2010, President Barack Obama’s administration ruled the project unworkable, and Congress stopped funding it.

Environmental impact assessments from the DOE and the NRC have since established that the repository would prove safe for one million years, though local politics mean it’s unlikely to be used.

“We have explored many alternatives of how to deal with nuclear waste, and there have been suggestions like disposal below the seabed, even launching them in to space, but internationally the consensus has been that a deep geological repository is the most technically feasible way to permanently isolate the waste from the environment accessible to humans,” says Tito Bonano, nuclear energy fuel cycle senior manager at Sandia National Laboratories.

HLW can remain radioactive for hundreds of thousands of years, though is likely to remain a danger to the environment for a relatively short period of half a millennium.

This can be countered by a deep disposal in stable geological formations in what is dubbed a multi-barrier concept, where isolation is due to both engineered and natural barriers (rock, salt, clay) and is permanent, in that future generations are not obliged to actively maintain the site.

Finland’s Posiva Oy facility Onkalo, a deep-geological repository kilometers underground and bored into billion-year-old bedrock, is currently the only permanent spent nuclear fuel facility to have been licensed and in construction.

In May, Posiva Oy started the excavation of final disposal tunnels.

Onkalo has the capacity to hold 3,300 canisters of used nuclear fuel, or 6,500 t HM, at a depth of between 400 and 500 meters over an area of some 2 square kilometers in tunnels with a total length of approximately 42 kilometers.

This is plenty for Finland’s own nuclear waste, which comes from four nuclear reactors with 2,800 MW capacity which supplies around a third of the country’s electricity.

Final disposal of nuclear waste will begin in the next few years at the Onkalo site on the island of Olkiluoto at Eurajoki in western Finland after Posiva – jointly owned by utility TVO (60%) and the state-controlled Fortum (40%) – started the excavation of the final disposal tunnels earlier this year.

Posiva will use a Swedish technology (KBS-3V) for the disposal of the waste where fuel rods are packed into canisters made of copper and cast iron, and then some 30 of these canisters, holding about 65 t HM, are packed into vertical holes that are finally sealed off with the buffer bentonite.

“You close that hole, move 10 meters back, then start packing the next hole. Each tunnel has about thirty holes, and then you fill the whole tunnel with bentonite and block it off with a concrete block. We’re now building the first five tunnels then we’ll keep building more tunnels over the next 100 years,” says Pasi Tuohimaa, Communications Manager at Posiva.

During a visit to the site late last year, the IAEA’s Director General Rafael Grossi said Onkalo was a game changer for the long-term stability of nuclear energy.

“Everybody knew of the idea of a geological repository for high-level radioactive nuclear waste, but Finland did it,” Grossi said at the time.

Salt of the earth

In Sandia National Laboratories, Kristopher Kuhlman, a geoscientist, and Melissa Mills, a geochemist, have just begun phase three of an experiment to understand how salt behaves near hot nuclear waste containers when waste is disposed of in layered salt strata.

Geological salt environments have been stable for millions of years, have a low rate of groundwater flow, and are self-sealing due to salt “creep”, a seemingly perfect option for disposing of waste.

To test this, Kuhlman and Mills have been examining salt at the WIPP in New Mexico where it closes on the storage rooms at a rate of a few centimeters a year.

However, the waste stored at WIPP is from the Cold War era and is cold, unlike spent nuclear fuel, and consists of barrels of radiated metal, clothing, and equipment.

It is the heat from used fuel and its effect on salt that the researchers are examining.

“We’re investigating the additional things that happen in salt when you heat it up, because it does behave differently,” says Kuhlman adding that salt’s movement over long periods is what makes salt mines an ideal repository.

“Salt’s most famous property that would make it beneficial for waste disposal is that it creeps closed or shuts any openings. So, if there are any fractures or any rooms that you mine out, they slowly creep shut and close naturally … unlike granite or brittle rock that could break, but it wouldn’t flow back together,” he says.

Not everyone is sold on the deep geological repository, however.

The European Commission Joint Research Centre (JRC) Science for Policy Report 2021 conclusion that deep geological formation disposal of long-lived radioactive waste was “considered as an appropriate and safe means of isolating it from the biosphere for very long-time scales” was quickly rebutted by the EC’s own Scientific Committee on Health, Environmental, and Emerging Risks (SCHEER).

The problem was the depth of the research, the lack of modelling, and the time scales being considered, SCHEER said.

Since the risk assessments to environment and human health made around deep geological repositories is based solely on modelling, and over very long-time scales, “high-level waste storage remains and open research question, with considerable uncertainties,” SCHEER said in its review of the JRC report.

Meanwhile, nuclear proponents believe that, once again, different standards are being applied to nuclear power than any other industry on the planet, many of which churn out millions of tons of toxic waste every day, of which, much does not degrade over any time frame.

“We, as an industry, have a plan to dispose of its waste for 100,000 years. What other industry has plans to deal with their waste into the next ice age? When there’s two kilometers of ice on top of Europe, when there’s no London, no Hamburg, no Stockholm … Ours is safe. It’s there in the bedrock,” says Posiva’s Tuohimaa.