The Wednesday Update including the best times to post to social media networks, is Twitter embracing e-commerce? And the rise of social login

Including the best times to post to social media networks, is Twitter embracing e-commerce? And the rise of social login

The kings of 140-character marketing have already experimented with commerce offering promoted accounts for some time. However, rumours are now circulating that Twitter is looking closely at a more formal e-commerce service that would enable its 232 million users to buy products directly from a tweet.

Many commentators have pointed to Re/code as a source of a possible buyout of Fancy, an e-commerce site supported by Twitter co-founder Jack Dorsey. The Re/code blog said: “A source with direct knowledge of Twitter’s commerce plans said that the documents were mock-ups created by Fancy.com, which presented Twitter with a version of what its Commerce product could look like. Twitter is also in discussion with other similar partner sites regarding its Commerce plans, according to this person.”

Whether Twitter like Facebook can find a happy balance between the platforms core values and its need to become more commercialised remains to be seen. What is clear is that corporations that have seen their use of Twitter become essential are eyeing the network for leadership in the commercial space. 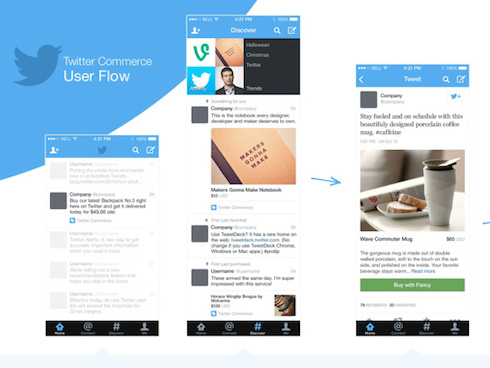 Social login is a must

Time poor consumers are increasingly looking for ways to save precious seconds when they are online. The latest research from Gigya profiling the use social media for login credentials reveals that Facebook still leads the pack with just over half of those surveyed using their Facebook profile.

Facebook is the clear winner when other scenarios are considered including the use of mobile devices, e-commerce activity and there is a clear preference for Facebook login across a number of geographical regions. For brand owners, offer social login is a must, as it speeds connections that often then lead to a conversion.

Video as every corporation knows has become the most popular form of content stared across the leading social media networks. The Twitter owned Vine has seen meteoric rise and now boasts 40 million users, with Instagram now having three times that amount.

Vine is showing that video content in its short form is far from limiting. With consumers’ time poor, the brevity that this platform demands is liberating. Every second nine tweets are sent that include a Vine video.

From a branding perspective, Vine is showing the way when it comes to content in 2014, and the propensity to share short-form video. Brand owners looking to connect with their customers need to be exploring how this form of communication can be used to broadcast their messages.

Updating your corporation’s social media accounts should be second nature, but choosing the right time to make these updates can have an impact on their success. This infographic from Social Marketing Writing, offers a handy snapshot of the best times to post.

Says Social Marketing Writing: “Posting your social media updates at the right times is the key to improving your presence on any social network. All social media aren’t the same. Each social network has different kinds of users and their daily activities vary. They use these networks at various times and days to engage with the updates published. To attain maximum engagement on your accounts you need to find out what these times are and then schedule your posts accordingly. You also need to figure out the best days to publish them.”

Social data analytics provides an unprecedented opportunity to gain an in-depth view of your customer, and develop actionable insights to drive future business strategy. Join us for our free webinar with Adobe, McDonalds and Whole Foods.