How to Manage Social Customer Services

A new infographic from Ohio University reveals the challenges that corporations still face when managing their customer services response over social media networks. The most telling statistic is that 70% of respondents stated that their customer service experience would influence their view of the company they are contacting.
Research over the last two years has consistently shown that the vast majority of social media queries are over Twitter, with most of these queries going unanswered, or when a response is sent this is hours after the original query was received.
And good social customer services can have a positive impact on your corporation’s brand awareness and the level of positive sentiment that is communicated. A survey by TripAdvisor showed that the businesses that were the most engaged across social media gained the most positive reviews. 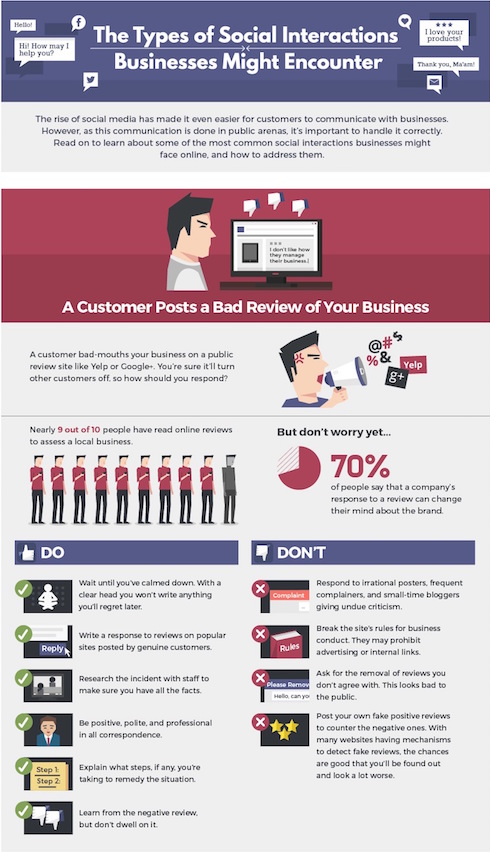 According to the latest insight from ALF, 2015 will be a bumper year for social media ad spending, with digital as a whole gaining the vast majority of the available cash. Some 38% of the 6,000 major UK brands and their agencies will be shifting from traditional ad platforms to digital. Some 64% of marketers stated social media is now a critical enabler of their business’ products and services, compared to just 25% only a year ago.

The State of Connectivity

Understanding how the world connects to the Internet, and how these groups of people behave is a fundamental component of all successful marketing campaigns. A report from Facebook, Ericsson, MediaTek, Nokia, Opera, Qualcomm and Samsung reveals that:
Infrastructure: More than 90% of the world’s population lives within range of a mobile signal. This means that we will need to look at issues like affordability and awareness in order to connect the majority of people.
Affordability: Globally, monthly data plans with a cap of 250 megabytes are affordable to 50% of the population. Reducing this cap to 100 MB achieves 80% affordability, and 20 MB reaches 90% affordability. But in locations like Sub-Saharan Africa, where 69% of people live on less than $2 per day, only 53% of the population can afford the internet with a cap of 20 MB, an amount that provides just one to two hours of Web browsing per month.
Relevance: Many people are not online because they are either unaware of the Internet or because there is limited relevant content in their primary language. To provide relevant content to 80% of the world would require sufficient content in at least 92 languages.

ROI is Still a Mystery

Corporations and their brands have been attempting to understand the actual impact social media is having on their marketing investment since the inception of social networks. However, it seems that ROI figures that are reliable and accurate are still eluding many organisations. According to eMarketer:
“Marketers are still struggling to measure return on investment (ROI), according to a November 2014 study by Webmarketing123, which found that 33% of US business-to-business (B2B) and business-to-consumer (B2C) marketing professionals still didn’t know which channel made the biggest impact on revenues.
“The study suggested that many marketers still relied on “gut instinct” when determining which channels to use for marketing campaigns, as the most-used weren’t always the most-measured. Always-popular social media was one of the biggest pain points for respondents.
“While 87% of B2B marketers used social media, just 17% were able to prove its ROI—the lowest percentage among channels used. Similarly, 87% of B2Cs used social—the No. 1 channel among this group—but only 27% could calculate ROI. And while paid search ranked second to last for usage among both groups, used by 56% of B2Bs and 64% of B2Cs, it landed at or near the top for return measurement.”
Developing robust mechanisms for ROI tracking and reporting are rapidly evolving, but it seems corporations have yet to fully realise their ambitions in this area of their social media activity.
Until next time….
The Useful Social Media team.