The Art of Visual Social Media: Part 2: How to develop a visual social media strategy

Visual content is taking the social media networks by storm. With video continuing to be popular, and the rise of Pinterest being nothing short of meteoric, how should you approach and measure visual?

A potential issue with the amount of visual social media around is that not every product or service lends itself to being looked at. To an extent it was ever thus: as long ago as the 1970s people were forced to ask themselves why a TV manufacturer took out TV advertising when people would by definition, not be able to see the better picture on the new set.

In much the same way, a number of manufacturers and marketers are being forced to market to an audience that enjoys visual stimulation more than their products would naturally offer. One such is Penderyn, named after the nearby village in Wales. It’s a whisky distillery making the only Welsh single malt and as such is all about flavour.
Managing director Stephen Davies explains why YouTube has become so much a part of the marketing effort: “We wanted to have some honest, authentic content on our social media page to sit alongside competitions and day-to-day activity to give people a real reason to want to find out more,” he explained.
“We've produced a series of videos, each of which is a short monologue from someone connected to Wales in some way. Some videos are of people who work for us, and others are simply people we think have something interesting to say.” 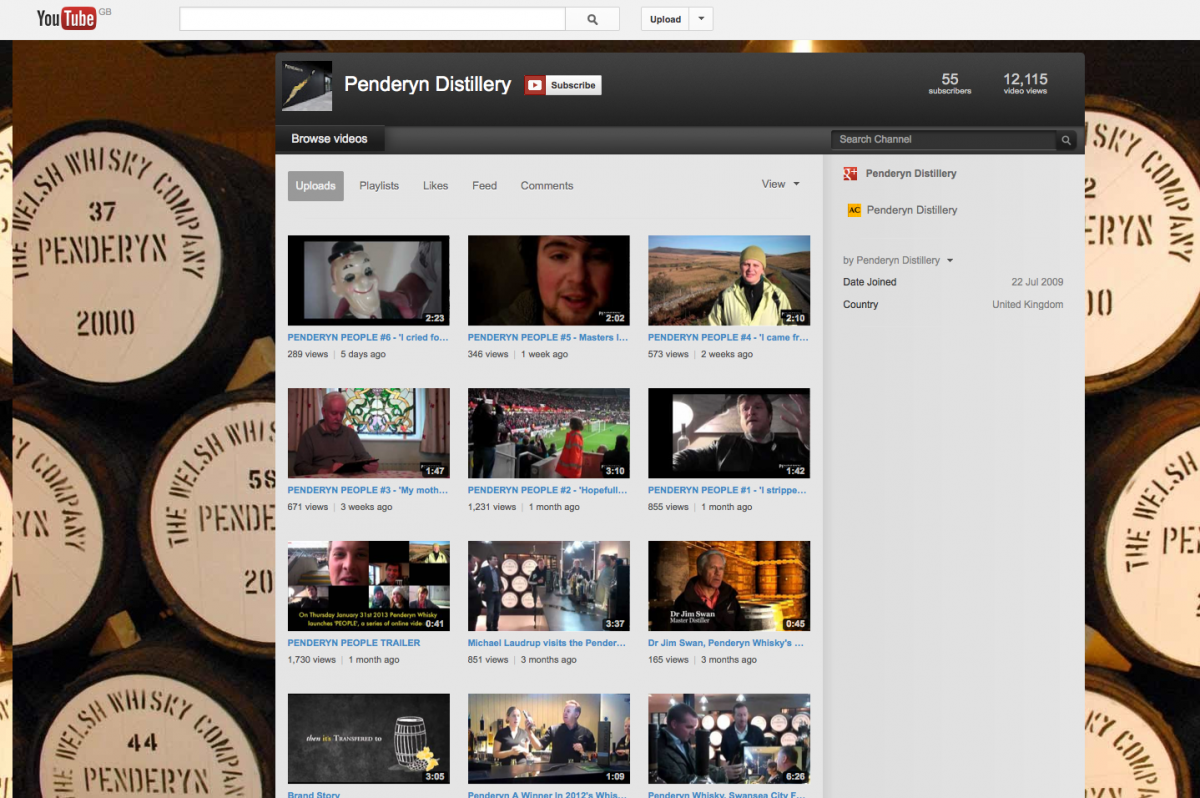 Hardly mentioning the brand by name, the videos on the Penderyn YouTube channel connect with the brand’s fans to create brand ambassadors, all without any hard selling techniques.

Promotion happens through Twitter and Facebook including paid-for Facebook advertising, and of course through the company’s own web page. However the local connection allows for a more creative approach: “For example, one of our videos centred on a Swansea FC game,” says Davies. “We used this one as a good reason to talk to Swansea fan sites online and on social media and asked them to share the videos, which was very successful for us. We have similar strategies for other videos.”
If whisky isn’t immediately visual then at least it can have a pretty bottle for people to look at. The same is decidedly untrue of accounting software, which is why KashFlow that makes precisely that sort of system – might raise a few eyebrows with its move into YouTube.
Marketing executive Stuart Bradley acknowledges that the company sometimes does things people might consider ‘silly’ but stresses this is part of its sales strategy. Accounting software, he concedes, is one of those things you mention and 90% of people’s eyes start to glaze over.
“Traditionally, advertisers ask the question: 'Do you need X? Buy Brand Y!' But the associations people have with accounting software don't make that a particularly appealing angle to come from,” he says. “By doing visual stuff like the #BreaktheMould video, we place more emphasis on the thing itself (whatever that might be) and consequently our brand. In that respect, we're saying 'Do you like Thing Z? We're Brand Y. By the way, we make X.’”
The ‘break the mould’ promotion is on YouTube and relates to a specific event. The set-up was simple; KashFlow put a number of ‘in case of emergency break glass’ type boxes in and around Central London but instead of fire fighting equipment they contained a license for KashFlow software and a genuine £50 note to get someone started in their own business. The company then filmed people breaking into the boxes and being delighted with the no-strings cash and software.
“As well as coming across a bit less salesy, that lets us get away from the preconceptions people have about what we do,” says Bradley. I think that's something that a lot of big brands are doing now. Take, for example, Red Bull. What does sugary, caffeinated water has to do with people jumping out of spaceships, recording studios and Formula One racing? Not much...but it's telling that I could think of three things associated with Red Bull almost immediately. Next time I reach for an energy drink, where do you think my hand will go?”
Just look at the success that video content can have for a brand. Last year during the SuperBowl one ad above all others stood out. The Volkswagen ‘The Force’ ad already had 100,000 views on YouTube. After its airing during the SuperBowl, this has jumped to 1 million in a few hours.

This isn’t to say it’s as easy as it sounds. Checking the videos either from Penderyn or from Kashflow you’re struck by the fact that the picture is steady, the sound clear; this isn’t a marketing wonk with a smartphone taking a quick bit of video, it’s professionally set up and framed. The ‘guard’ in the Kashflow video is almost certainly a professional actor and the camera crew are professionals. It takes resourcing and careful thought.
Measuring success is everything in social media, which is why correctly setting targets is so important. For Penderyn’s Davies it isn’t about sales but whipping up engagement with the brand. “If all of the videos get 1,000 views each, we feel that it will be a worthwhile investment, so that's our short-term aim,” he explains. “As the campaign goes on, we may also use other metrics, but at the moment our focus is purely on getting the videos in front of as many people as possible while also having some direct engagement on the Facebook page.”
Other examples get people to put their own content up as a means of engaging. Printed.com is a business trying to get people to use online print services in different ways, and last year it ran a competition to personalize their own Faberge-style egg and put the result on Pinterest; the design that won the most likes earned its originator a prize. There have been numerous ‘submit a picture or video of yourself doing X’ competitions and they always get good engagement.
Also, how your business’ brand advocates make recommendations has also changed recently. Video content is now more popular than any other material online. A report from Decipher Research indicated that within the 18-34 age group over two-thirds (73%) of those that viewed a video recommending by someone in their social media group recalled the brand being mentioned. Also, the level of enjoyment of a given video also has a major impact on brand recollection. 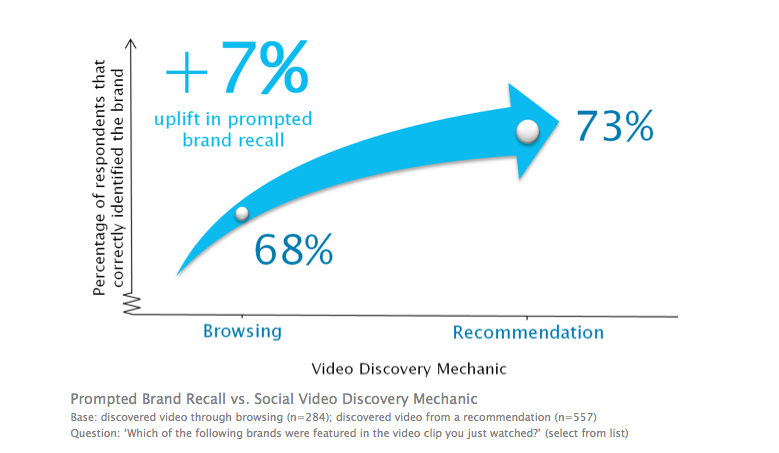 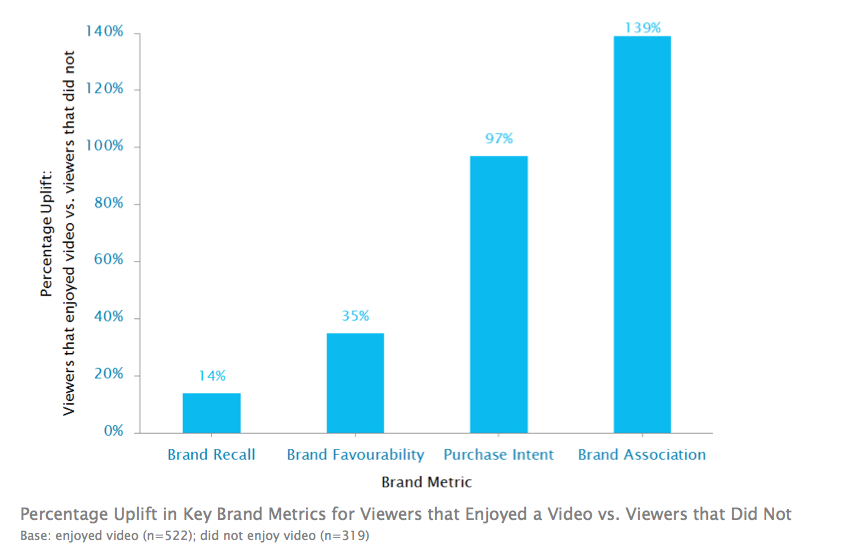 [SOURCE: Unruly ‘What’s Next for Social Video Insight’]
David Waterhouse, Head of Content at Unruly concluded: “Social video is emerging as the format of choice for planners and strategists with an eye on the long game. The honeymoon for the 15-second pre-roll ad is coming to an end as advertisers demand better execution and cut-through and move budgets from push formats towards pull solutions; even pre-roll is starting to morph into an interactive multi-choice medium.”
The secret to success has many facets, the first of which is not to underestimate the scale of the task. Social video needs to look professional and act as an extension of your brand. Second, understand your audience – you may make accounting software but then your clients will be entrepreneurs, so talk to them about business start-ups and funding and they’ll be engaged. Third, set a realistic target – then start finding something visual to link to, whether it’s an obvious example or not – and don’t overlook the chance to promote it.