What’s behind the psychology of a Like, and why aren’t there any scientific studies telling social media managers what process a person goes through as they hit the Like button?

In the absence of any such study, complete with double-blind tests, I decided to delve in to the Unmetric database and pull out all the Facebook posts from brands that received over 1m likes.

However, there was a problem.

To date, no brand has achieved more than 1m likes on a single post. Sure, some of the media companies achieved 1m likes, but no sports team, movie or brand hit the magic number. Maybe it’s the brand version of the 4 minute mile. One day, perhaps, a plucky upstart will come along with a dream and see it to fruition.

Undeterred, I ordered another query from the great computation machines known as software engineers: show me all the posts that scored between 500,000 and 1,000,000 likes.

The results came back, and I was shocked. I think you will be too.

I expected the social media heavyweights of the world to be featured. Coca-Cola has nearly 70m fans and not a single post with more than 150,000 likes. Starbucks? McDonald’s? Yes, they are lauded for their social prowess, but they can’t cobble together 300,000 likes on a single post. Oreo? They might know a thing or two about shock and awe tactics, but are limited when it comes to likes.

So which brands did make the list? You’ll never have guessed some of these.

Wow. Seriously? Taking the Gold, Silver AND Bronze, it’s UPS. Yeah, you read that right, UPS, the logistics company. Be honest now, how many of you saw that one coming? Well, those in the know will tell you that UPS has been quietly getting their social strategy down to an art form. As it turns out, moving things from A to B can be quite exciting when you are moving ancient relics and the like. Oh, and it helps to have an awesome workforce akin to the The Avengers, who leap in to action when trouble comes their way. Now then, tell me again why B2B social media is difficult? 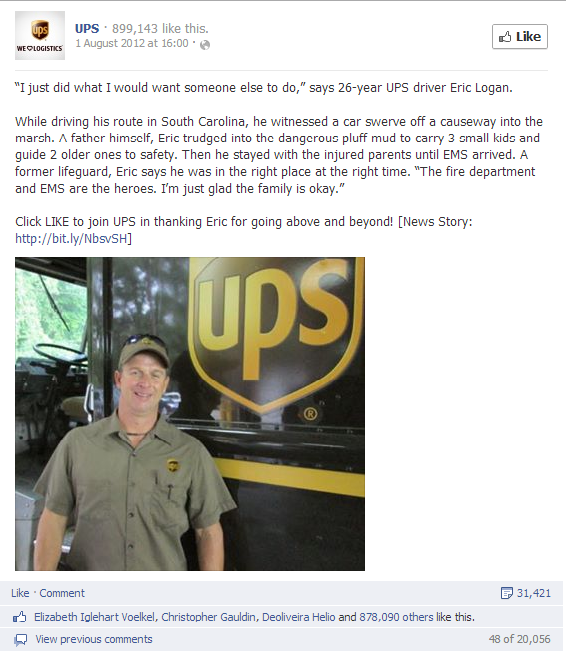 Can you believe that UPS had just 375,000 fans when this post was made. 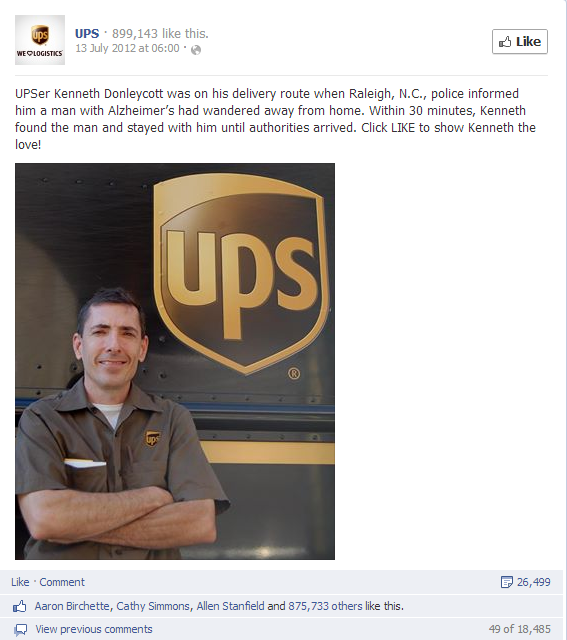 This recently posted update is still gathering likes so has the potential to become the most Liked brand post on Facebook. 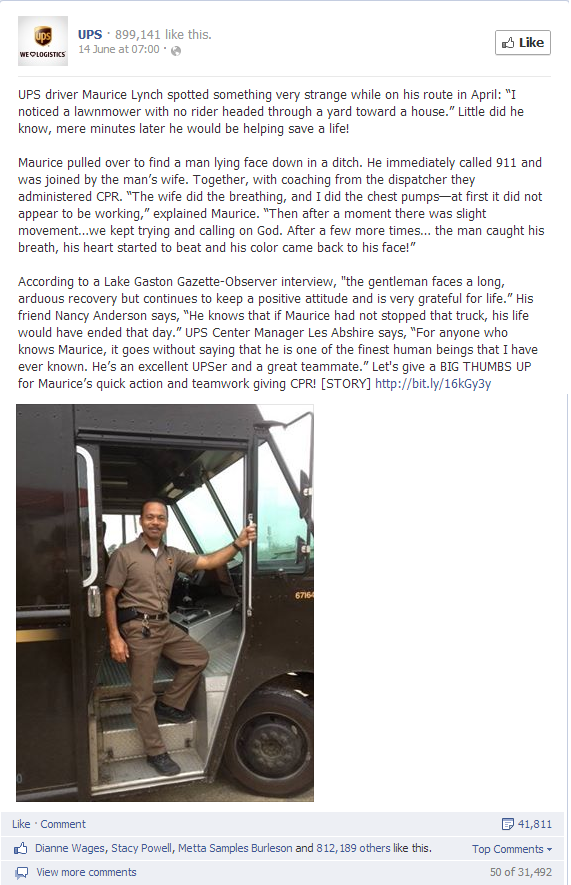 Subway is something of an unexpected titan amongst social media brands, generating less controversy than McDonald’s without the pomposity sometimes associated with certain coffee shops. Anyway, for this image, just how much cuteness can you cram in to one photo? I wonder if Subway knew how much of a home run they hit when a customer sent in this image. 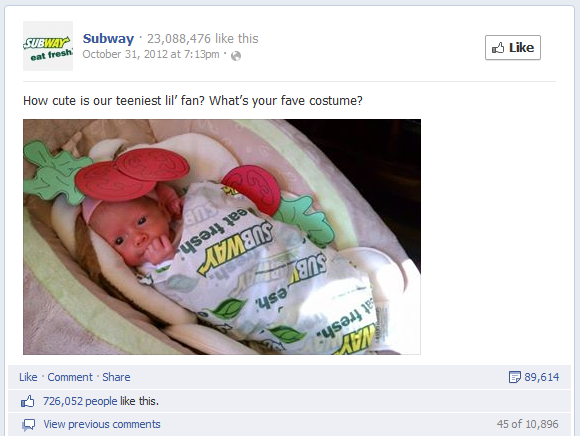 Say who now? Park Avenue is a male personal care brand from India. By targeting the aspirational, distinguished gentleman, the branding team have taken a higher ground with their content strategy when compared to other brands in this sector (we’re looking at you, Axe!). The question to ask about this post is: Why wouldn’t you give it a Like? It’s awesome! It’s almost like your very own bat cave in a “not really” sort of way. 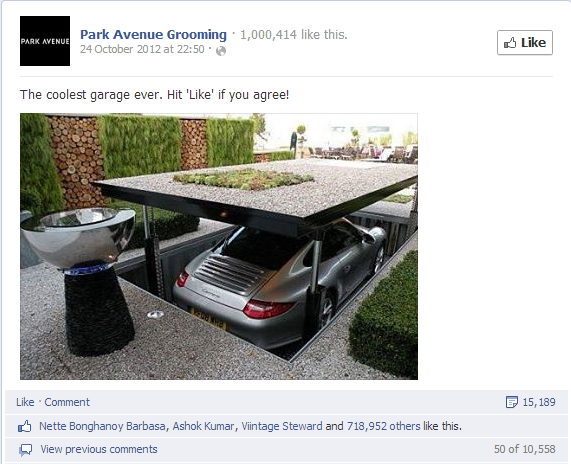 This e-commerce company embodies the randomness of the Internet. It sells clothes to vibrators, lava lamps to puzzles. However, it seems that someone forgot to tell Spencer’s social media team what the company actually does because a visitor to their Facebook page will be confronted with memes, contests and random stuff collated from the ‘net. Barely a promo or deal in sight. Generally the page gets a lot of engagement, but the brand hit the jackpot with this image which took people back to their childhoods. 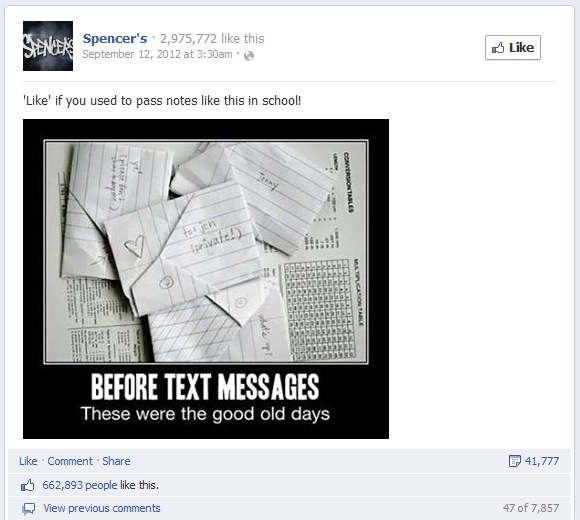 Hey, did Samsung recently launch a new mobile phone or something? I would say these engagement numbers are enough to send Tim Cook running scared, but I think the Apple share price has already done that. Apple doesn’t do social media. Samsung, on the other hand, OWNS social media thanks to their highly desirable range of phones. 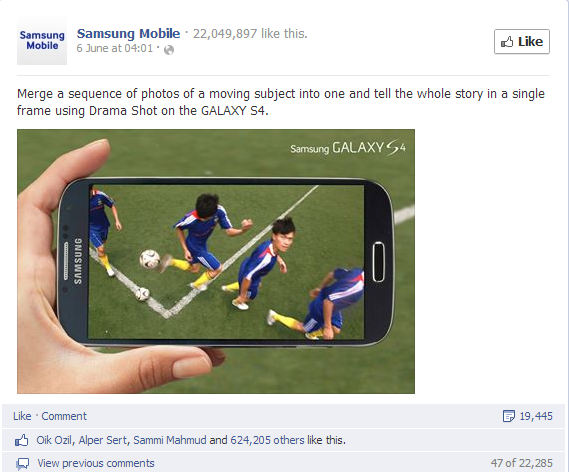 This post was one of the most Liked Samsung Mobile posts that didn’t talk about the features of the phone. 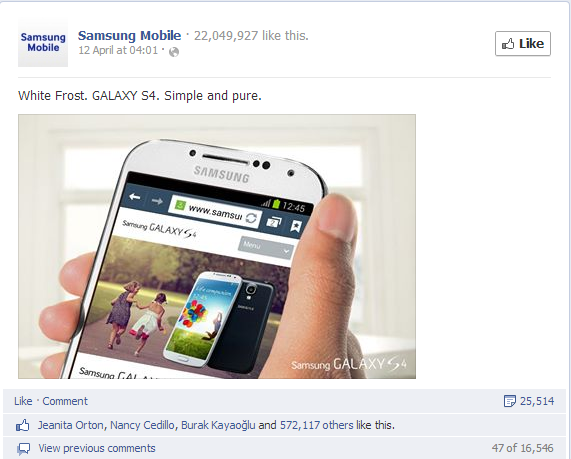 The most liked brand video on Facebook, it had to be about a Samsung Mobile! 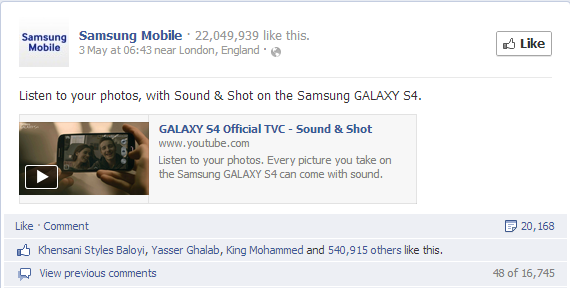 Sometimes, not often mind you, but sometimes, the most random things capture people’s imagination. In this case, Yoplait posted a picture of a spoon with a funny caption and the peeps of the world chortled and bashed on the Like button as if it was the funniest thing they’ve ever seen. It’s a great captioned photo and basically sticks two fingers up to all the brands that spend hundreds of dollars creating beautiful, but slightly pretentious, photography for their Facebook page. You know who I’m talking about ;-) 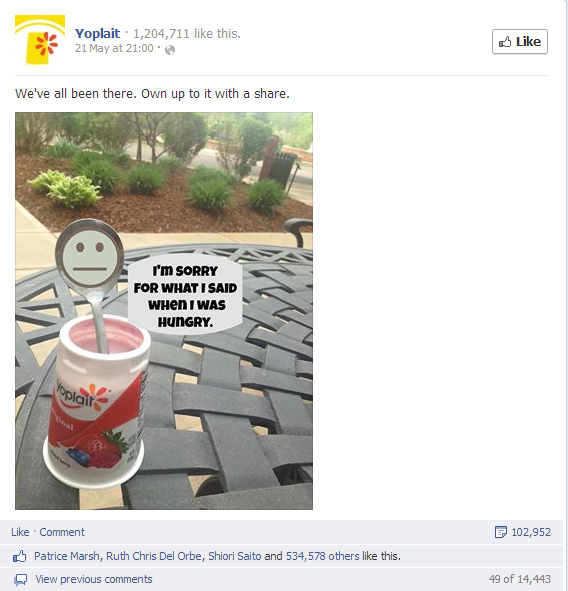 You’d have thought that dropping a man from space might have created a bit more of a buzz than a spoon saying sorry. But no. This is the interwebs. Random, WTF and lolcats is the default state of being. Still, making the top 10 of this list is no small feat; I don’t see any other beverage brand here, do you? 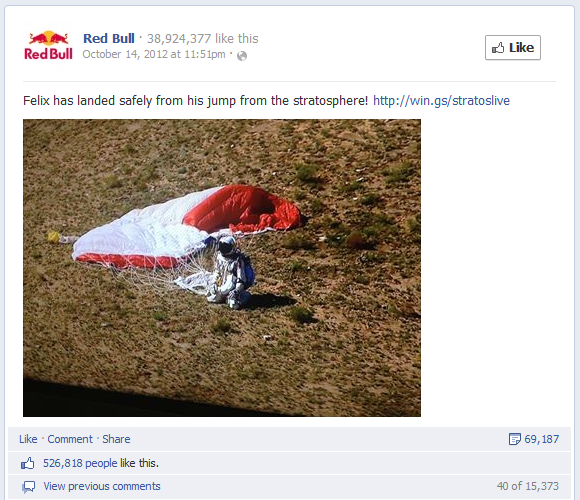 Hello again Mr. Samsung Mobile, fancy seeing you once more in this list. Here, we have people prove they are absolutely, definitely not iSheep drones by Liking this post about the S4, along with all the other people. Definitely no cult like crowd following going on here. Oh wait, hang on a second…

(this is actually a pretty cool feature though, don’t you think?). 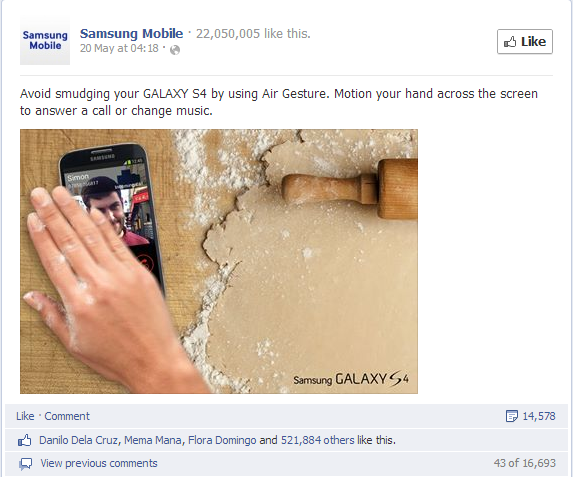 Shh, don’t tell anyone, but Intel is probably one of the most social brands on Facebook. By mixing informative posts around ones like this and then sponsoring these kinds of posts, Intel has grown from something you’ll find inside a computer to something even your Mom has heard of.

(By the way, the Gangnam Style video now has 1.67bn views. Go and give it another listen for old time’s sake!) 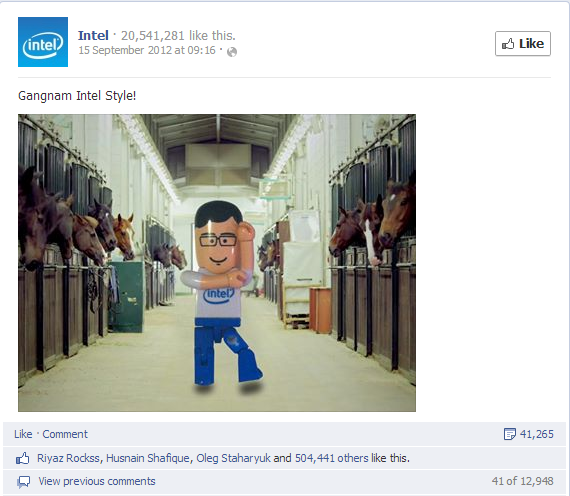 So what are the takeaways for this article? If anything it’s that we can’t predict exactly what will go viral on Facebook. However, the human interest stories, especially the ones of hope and courage, seem to do particularly well. Hmm, I think I’ve just had a lightbulb moment with Hollywood’s current obsession with super-hero movies.

How can you make your Facebook page more human? What are your staff or customers doing that’s awesome and the world needs to know about? Whatever it is, put it on Facebook.

These posts were gathered from the Unmetric database which covers over 10,000 brand pages on Facebook. The majority of which are based in the US. Media companies (eg. CNN, ABC), TV shows, movies and sports teams were discounted from the study. The time frame was July, 2011 to date.