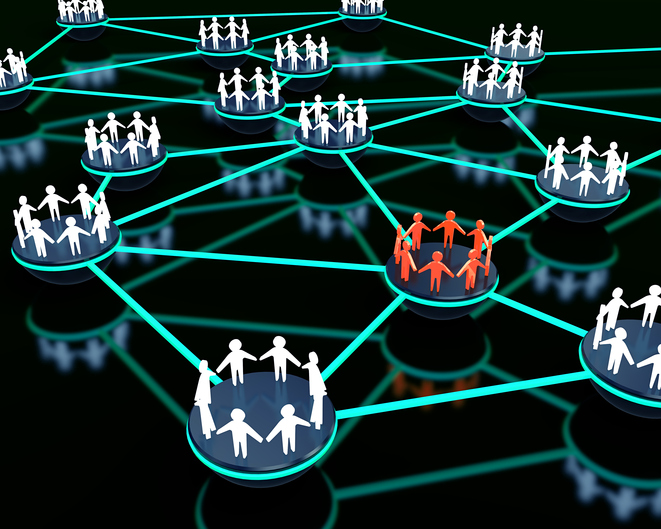 The Dark Matter of the Insurance Universe ...

In our previous post, on Claims, we highlighted the importance of claims as a customer touch-point – a poor claims experience is indeed a leading cause of customer churn. However, fraudulent claims are also a massive area of carrier losses. There is a tricky balance to be struck here... Treating every claimant like a potential criminal is an obvious no-no, but objective scrutiny must exist at some point in the policy life-cycle.

Fraud is the dark matter of the insurance universe. Discovered cases cost insurers (and ultimately policyholders too) millions every year, and its full hidden extent can only be guessed at – it is in some sense the gap between how risk models should work and how they appear to work on the ground, with undiscovered fraud ultimately getting priced into premium costs.

Derek Brink, VP and Research Fellow in Information Security and IT GRC at Aberdeen Group, recently estimated the cost of fraud at between 5% and 10% of insurers’ annual revenue, noting also that it takes firms a median time of 20 months to detect on-going fraud. Every penny saved on fraud is an additional penny back onto insurers’ bottom lines, and what defeating fraud would ultimately mean is that they could offer their policyholders more competitive prices.

"Fraud concern is no newcomer to the insurance industry, especially in the healthcare and motor lines of business. The fact that the internet is not attributable has made the fraud situation even worse as digitisation proceeds at a pace."

In this post, we assess both the size of the fraud problem and a range of approaches for containing it. The following stats and outside perspectives are drawn from our Global Trend Map; a breakdown of all survey respondents, and details of our methodology, are included in the full report, which you can download for free whenever you please.

Download your complimentary copy of the full Trend Map here ...

Who Wields the Sword in the Battle with Fraud?

People most readily associate insurance counter-fraud with the claims department, because this is where fraudsters cash in and has historically been the point in the cycle where most frauds get unmasked. However, there is a limit to how far reactive approaches to fraud can take insurers, and stopping fraud closer to its roots is certainly preferable to focusing exclusively on the ‘final mile’ (namely claims) for its interception.

It’s clear that the next generation of counter-fraud will be proactive and cross-functional, tracking potential fraud indicators across the entire insurance lifecycle. We asked insurance carriers to indicate which departments were currently involved in combating fraud within their organisations ... 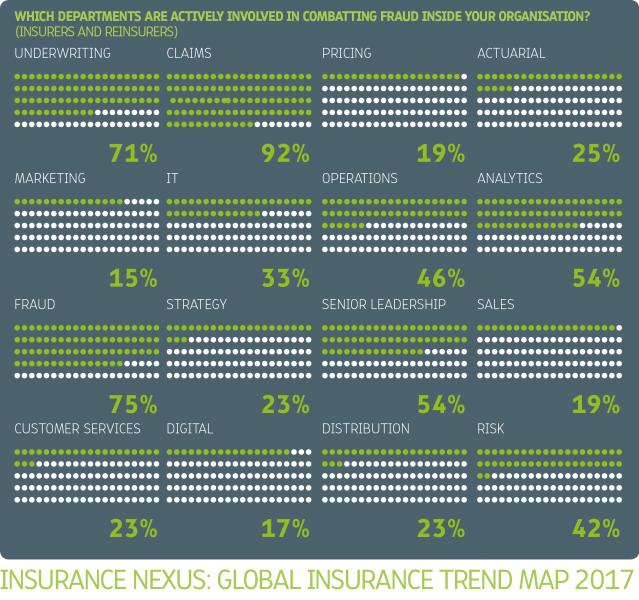 Understandably, we see a large role attributed to dedicated Fraud departments as well as to Claims departments, and this is unlikely to change moving forwards (the less than 100% figure for Fraud departments may be due to the counter-fraud function sometimes being subsumed elsewhere). Other departments that stand out as having central roles are Senior Leadership, Operations, Analytics, Underwriting and Risk.

"If you stop fraudsters coming into the business in the first place then you have to spend less from the beginning, enabling you to improve the journey for other, genuine customers. But it’s difficult to get that balance in a competitive marketplace as the investment isn’t so obvious. It requires a change of mind-set."

The fight against fraud is by no means limited just to carriers. Indeed, with the shift towards more proactive counter-fraud approaches, greater attention is being brought to bear on indirect channels. Historically, brokers and affiliate partners have been incentivised primarily on a volume basis and have directed plenty of bad business towards carriers. Insurers can therefore make substantial savings by educating their brokers and affiliates on best practice, so as to root out fraud at the application stage before it ever enters their wheelhouse – although they obviously need to tread a fine line between on-boarding bad business and turning away good customers.

"Part of the problem is the appetite for fraud detection in the broker channel. We’ve had to convince brokers to protect us against fraud because by sending us that business, they ultimately end up suffering too. Brokers see sales as a volume and growth business rather than one built on quality, and as a company, we are always interested in quality."

A couple of general stats ...

For all the facts, get your free copy of the full Trend Map here ...

We don't have scope here to explore specific counter-fraud solutions in detail. However, we did ask our respondents and industry contributors about different high-level approaches. These include before-the-claim strategies, data-sharing coalitions, the Internet of Things (IoT) and Blockchain technologies.

"We can look at using smart technologies that look at probability and profiles of individuals’ past behaviours. If someone fits a certain profile, there is a higher probability they will be a fraudster. It’s an interesting area but also dangerous."

By identifying policies intended to facilitate fraud at the time of underwriting, insurers can prevent fraud advancing to the point of a claim being made; as a general rule, the more relevant data that can be pre-populated, the fewer opportunities there are for opportunistic fraudsters at the application stage. This directly reduces the amount of fraud that gets through the lines and helps also to unburden the claims department. Encouragingly:

Fraudsters do not just recycle specific items of (fraudulent) data but also deploy the same distinctive methodologies against multiple targets. Effective data-sharing in counter-fraud means that, once unmasked, a fraud tactic is truly disarmed. Reassuringly then, we registered universal approval for this sort of initiative from the entire industry.

When it comes to IoT, much of the attention is on preventative and value-added services (check out our earlier post on the topic). However, one of the more immediate boons of the technology is its role as a fraud deterrent.

Take workers' compensation insurance in a factory or construction environment, for example. Installing IoT devices on site for monitoring purposes makes it much more difficult to dress up instances of non-compliance for the purpose of inflating a claim (or making one in the first place), and means compliant clients can be treated accordingly. This also applies to the personal lines: with full transparency over where a car has been and what motions it has undergone, Auto customers are, generally speaking, less likely to lie about, and exaggerate, what has happened.

At the same time though, IoT can also be a new attack vector for fraud. By hacking an IoT device, you could in theory 'spoof' whatever behaviour you wanted, so as to deceive your insurer – which would be particularly attractive if target-based discounts were in play. Imagine hacking your FitBit to show 10km of jogging a day while you remain safely ensconced before your television awaiting your health-insurance rewards... So cybersecurity is as important for the insurance aspect of IoT as it is for every other.

Another multi-faceted technology with clear applications for counter-fraud is Blockchain: a distributed ledger for recording transactions between different parties without relying on a trusted (though oftentimes untrustworthy) central authority for verification. We spoke briefly to David Piesse, Chairman of IIS Ambassadors and Ambassador Asia Pacific at the International Insurance Society (IIS), to find out more:

‘The emergence of the new Internet, commonly called the Blockchain, means we no longer have to trust the internet but in fact can make sure it tells the truth. In Estonia, they wrapped the internet with a Blockchain technology that has removed digital fraud from the healthcare sector in that country, and this is now being applied elsewhere.

It’s possible to map the Blockchain protocol over the Insurance Combined Ratio, with fraud and expense reduction on the top line and an increase in Earned Premium on the bottom line via new product and operational efficiency. This can give the c-suite an opportunity to see the effect of the new technology on their profitability before investment income.’

Blockchain continues its march into insurance apace. Indeed, Munich Re and Swiss Re last October founded the B3i Consortium with the express intention to ‘explore the potential of distributed ledger technologies to better serve clients through faster, more convenient and secure services.’ Blockchain clearly has massive implications for all forms of data and monetary interchange, and we look forward to seeing its continued application both in counter-fraud and more widely.

This year's Global Trend Map did not contain a dedicated section on Blockchain, but we look forward to including one in our 2018 edition, so stay tuned! In our next installment we move on to the germane topic of Cybersecurity: considering what insurers can do to keep their vast troves of customer data safe from attack. Or, if you'd like to read ahead straight away, then simply download the full Trend Map whenever you like. 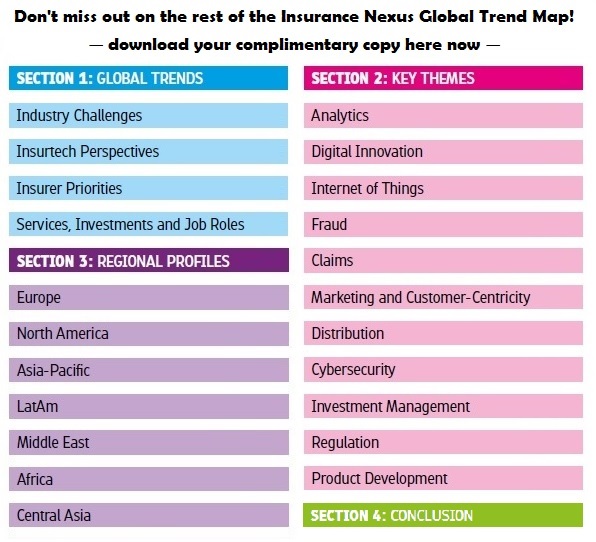