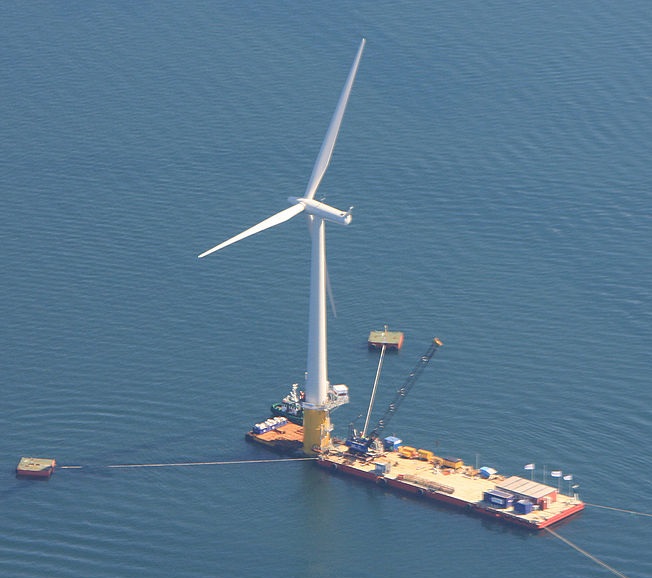 Hywind Tampen will be the world's largest floating wind farm and will supply power to offshore oil and gas platforms. (Image: Wikimedia Commons)

In April, the Norwegian government approved Equinor's NOK5 billion ($531.3 million) Hywind Tampen floating wind project. Due online in 2022, the 88 MW project will be the largest floating windfarm in the world and will supply power to the Gullfaks and Snorre oil and gas platforms on the Norwegian Continental Shelf (NCS). Norwegian state fund Enova has agreed to fund NOK2.3 billion towards the project.

Equinor used learnings from the Scottish project to reduce costs for Hywind Tampen by 40%. The project will also provide learnings in design and operation that will expand development opportunities, Woodcock told the US Offshore Wind Virtual conference on June 19.

Hywind Tampen will use a lithium-ion backup power concept to integrate renewable power generation into the existing gas-fired power system.

"We will be able to build a renewable microgrid," Woodcock said.

"It's a really exciting thing that we can apply to all of our power sector-focused business areas," he said. The Hywind Tampen project involves 11 Siemens Gamesa turbines of capacity 8 MW, a step up from 6 MW turbines used on Hywind Scotland. The turbines will have a rotor diameter of 160 meters and blades of length 81.5 m.

Norway's Kvaerner will design and build the substructures and lead onshore assembly, inshore marine operations and site connection. UK group JDR Cable Systems will supply the electrical cables and Norway's Subsea 7 will install the cables and connect up the wind facility to the oil platforms. Siemens Gamesa has signed a five-year turbine service agreement.

Going forward, this will give Equinor greater flexibility when responding to global tender requirements, such as domestic content quotas, Woodcock said.

"We will have proven concepts with both materials," he said.

For Hywind Tampen, Equinor will take advantage of deep draughts on the Norwegian fjords staging areas and use a ring crane to assemble fully-assembled towers onto ready-made substructures. On Hywind Scotland, Equinor used a large Saipem 7000 crane vessel to lift the turbines onto the substructures.

"That's going to save us a lot on costs," Woodcock said.

The project will also feature a simplified mooring and shared anchoring system which reduces the number of suction anchors to 19, almost half the amount used on a conventional anchoring system.

Hywind Tampen will supply 35% of the power needs of five platforms on the Snorre A and B and Gullfaks A, B and C licenses.

Equinor will operate the wind farm on behalf of the license holders.

"That's important for us as a company - New Energy Solutions - we want to be operators where possible," Woodcock said.

The integration of the wind turbines and lithium-ion technology with the existing gas-fired power system on the platform will require "dynamic interplay" with the oil and gas platform operator, Woodcock said.

"We will have a three-tech microgrid configuration with volatile loads, stochastic anomalies, trips, frequency irregularities - all sorts of challenges."

Equinor plans to follow Hywind Tampen with a project of capacity 200 to 250 MW by the mid-2020s and predicts costs could fall by a further 30%.

Scotland is a key potential market for scaling up floating wind, Woodcock noted. Last month, Crown Estate Scotland, launched a leasing round for up to 10 GW of offshore wind capacity.

Other "strong candidates" for hosting larger projects in the mid-2020s include South Korea, where Equinor is already active, France and the US, Woodcock said.

"From there we think floating wind plays a key role - perhaps an irreplaceable role- so we are very bullish on that sector."