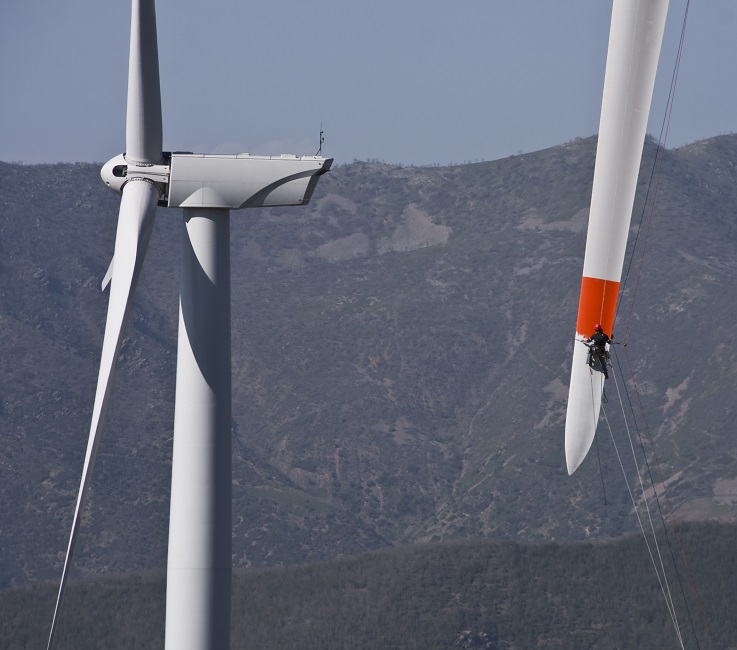 The percentage of U.S. wind power projects incorporating multiple turbine capacities from a single supplier hiked from 25% in 2017 to 35% in 2018, according to the Department of Energy's (DOE) recent Wind Technologies Market Report.

Most of these turbines "differed by all three of the major characteristics: hub height, rotor diameter, and capacity rating," DOE said. 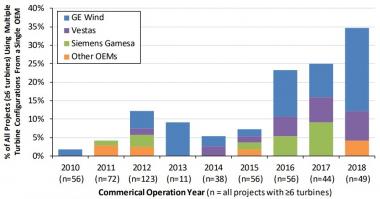 “From installation and O&M perspectives, having different turbine types in the same park usually only has disadvantages," Till Junge, Vice President, Product Strategy & Sales Support, Nordex Group, told New Energy Update. "Simply because it increases the variety of components within the facility.”

Turbine capacities have grown rapidly in recent years but many sites do not permit the installation of the latest large-scale models.

"You could be near housing developments or next to flight paths,” Michael Taylor, Senior Analyst, International Renewable Energy Agency told New Energy Update.

“Smaller turbines within certain parts of the windfarm could be appropriate, and can be a good way to maximize the wind available," he said. 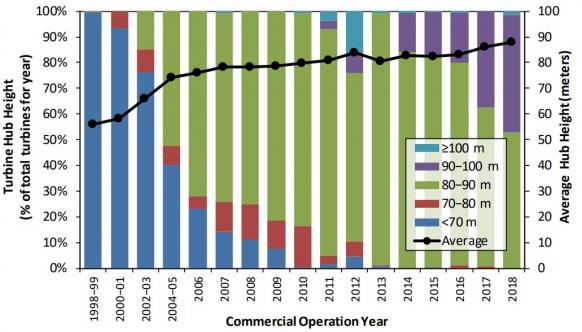 "This may be in terms of maximizing electricity generation or ensuring a more even generation profile," he said.

Nordex multiple turbine configuration deals include the supply of 104 turbines of capacity 4.5 MW turbines and 10 turbines of 3.9 MW to E.ON and Credit Suisse's Nysater wind project in Sweden.

"This optimization potential and ability to customize the turbine configuration, provides a huge advantage with large-scale projects like Nysater, where typically the wind conditions and complex topography vary greatly across the site," it said.

In another recent deal, Vestas received an order for V150-4.2 MW and V110-2.0 MW turbines for a 242 MW wind project in the US. Vestas would look to create a "tailor-made" site layout which would optimize the site’s wind resources, the company said.

In the U.S., qualification rules for the federal Production Tax Credit (or PTC) have accelerated demand for multiple turbine configurations. PTC incentives fall by 20% per year and "safe harbor" rules require developers to incur 5% of total project costs to qualify.

Wake control strategies can increase output by as much as 10% at some sites, Jim Kiles, CEO of Vayu, told New Energy Update in June.

The installation of assorted turbine capacities raises a range of construction and maintenance challenges.

“Overall, using different turbine capacities within a single plant will probably push up operation and maintenance (O&M) costs,” he said.

The growing trend of multiple configurations comes as O&M suppliers look to increase their share of the growing O&M market.

For example, Vestas agreed a 25-year service agreement as part of its recent 242 MW multi-configuration deal in the US.

"Using the same O&M provider (such as Vestas) can help minimize those extra costs," Taylor said. "But a lot depends on how good your supplier is, and what it’s prepared to offer you."

“The idea of mixed turbines on sites that are maybe not the prime locations is definitely an opportunity for growth within a mature market such as Europe, where lots of the most usable sites are already taken,” Ohlenforst said.