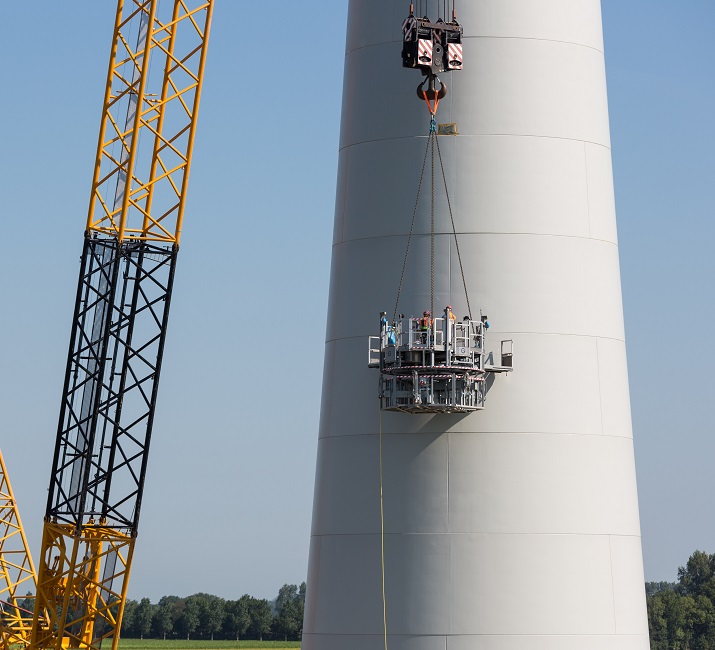 Larger turbines with higher efficiency rates are driving down the cost of onshore wind power. Companies are installing longer blades to similar generator sizes to raise output efficiency and improve the competitiveness against other generation types.

By 2016, the levelized cost of energy (LCOE) of U.S. offshore wind farms had fallen to $30/MWh-$62/MWh, the Lazard research group said in a report.

Wind experts predict the LCOE of onshore wind will fall by 24% by 2030 as technology improvements drive a rapid increase in turbine capacity and hub height, according to an industry survey published by Berkeley Lab, the National Renewable Energy Laboratory (NREL) and University of Massachusetts in November 2016.

The global survey of 163 leading wind experts showed nameplate turbine capacity is forecast to rise from 2.0 MW in 2015 to 3.25 MW in 2030. Some experts even predict average nameplate capacity could rise to as much as 6 MW by 2030, the survey showed. 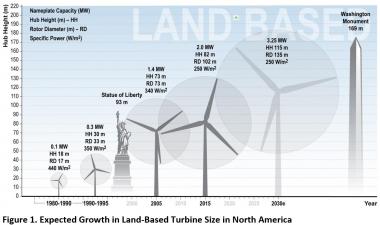 The deployment of taller, higher-performance windfarms will open up new market opportunities for developers.

"The deployment of taller wind turbines (already prevalent in Germany with average hub heights at 116 m) will expand U.S. land area available for wind deployment by 54%. Further innovation and increasing heights to 140 m will increase that further to 67%," the Department of Energy (DOE) said in its 2015 report 'Enabling Wind Power Nationwide.'

"It's something we are definitely watching as turbines continue to get larger-how this will affect [balance of plant] costs as far as installation goes," he said.

"Innovations addressing the technical and economic challenges [of larger turbines], as well as the environmental and human use considerations, are critical to realize the nation’s full wind power potential," it said.

“We’ve been installing 3 MW machines inland for some time now...Installation costs have reduced as we have honed things such as installation design," Neil James, Director of site operations at Apex Clean Energy told Wind Energy Update.

"Advances in tooling means we can install turbines in a much more cost-effective way than 10 years ago," James said.

“Some [Original Equipment Manufacturers] now include the option to assemble a rotor on the ground and lift it in one piece or lift the blades one at a time up-tower, making more but lighter lifts,” he said.

“A similar option is available for some large nacelle lifts… Instead of requiring a heavy lift of the fully assembled nacelle, some OEMs have introduced the option of leaving the drivetrain (gearbox, main shaft, hub) on the ground while lifting the nacelle and later assembling the drivetrain into the nacelle up-tower,” Fitchett said.

“This makes for two lifts instead of one, but can reduce the requirements and expense of the crane equipment,” he said.

“Specialized, sometimes proprietary or patented tools are becoming available to hold, rotate and manipulate blades to align them properly when assembling them one at a time up-tower,” Azmat said.

New measures to reduce costs are under development, including on-site manufacturing of concrete or steel, self-erecting towers, and tower-top mounted systems for lifting/winching, Fitchett noted.

According to the DoE, higher vertical loads from larger units will require the development of new foundation designs in order to minimize costs.

Demonstration projects have shown some promising new foundation technologies but they are not yet cost-effective or technically acceptable to be deployed in a widespread manner, Fitchett warned.

“The vast majority of foundation designs for wind energy are proven across many industries over many decades, with the most common type by far being the inverted “TY” shape buried in the ground beneath the tower. The foundation is one of the components of a wind turbine system that a site owner typically takes responsibility for, so tried and tested methods may be the norm for some time to come,” he said.

Increased rotor diameter and hub heights raise transportation and logistics costs. Wind turbine blades longer than 53 m present a transportation obstacle due to large turning radius required to navigate corners or curves on roads and railways, the DoE said in its report.

Tower sections have typically been limited to 4.3 m or 4.6 m in diameter, depending on the routes, to fit under overhead obstructions, it said. 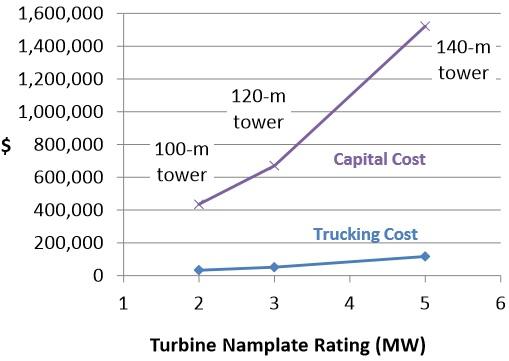 Solutions which could help mitigate blade and tower transportation challenges include segmented blades and on-site tower manufacturing, but NREL has warned that it will take time to develop these new manufacturing and installation techniques.

"Scaling up cost-effective technologies from low technology readiness levels (TRL) to commercialization will take time and require significant investment in research and development," NREL said in its 2014 report "Analysis of Transportation and Logistics Challenges Affecting the Deployment of Larger Wind Turbines."

Another key challenge for developers is procuring the large cranes required to lift the nacelle onto the tower. There remains a limited number of the largest cranes, especially in regions with little wind energy development, or areas with high demand from other construction sectors.

"The availability, scheduling, and logistics of the larger crane classes required to lift progressively larger wind turbine nacelles onto taller towers is increasingly challenging," the DoE said in its report.

Advancements in crane development should help to mitigate this issue going forward. In one example, Manitowac Cranes in Wisconsin introduced a new 650-ton crane to install and service a 3-MW wind turbine nacelle to 140-m hub height and to have a 100-ton capacity at 140 m.

Firms can mitigate a shortage of large-scale cranes by using more than one crane to hoist it nacelle onto the tower, NREL said in its 2014 report. Europe has seen a trend towards taller turbines than in the U.S., and this stimulated a number of tower construction, crane, and transportation innovations which could be applied in the U.S., DoE said.

Further innovations in the transportation, installation and operations of larger wind turbines will create new revenue streams for developers and could also boost the U.S. manufacturing industry.

"These larger machines can greatly expand the deployment of wind energy into low- and moderate-wind-speed regions in the U.S. (such as the Northeast, Southeast, and West) and enable LCOE reduction pathways for all land-based wind turbines," NREL said in its report.

"In addition, the components required for larger wind turbines, such as the blades, can be manufactured more cost-competitively in the U.S. as opposed to being imported. As a result, domestic content and U.S. manufacturing competitiveness may be increased by addressing challenges that limit the deployment of larger turbines," it said.