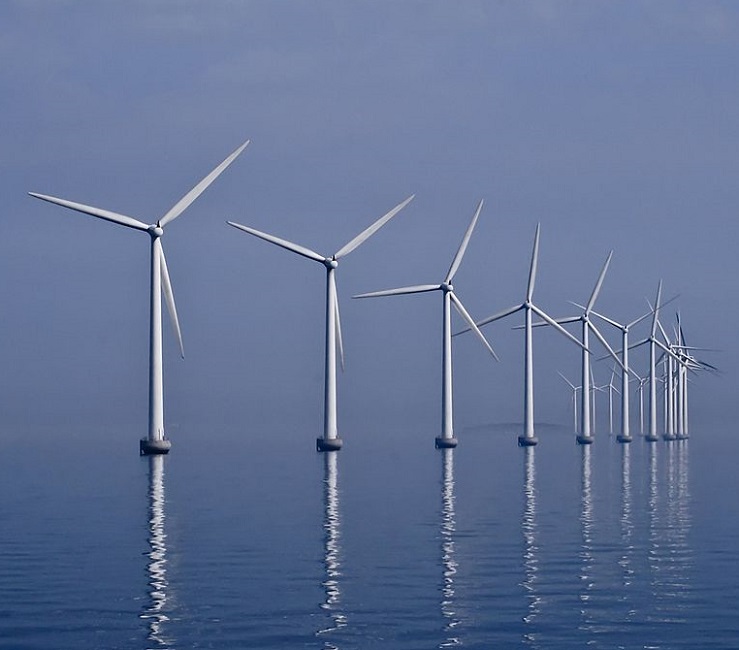 Two new studies by the US National Renewable Energy Laboratory (NREL) have revealed the huge potential for offshore wind in the Gulf of Mexico.

NREL's analysis, commissioned by the Bureau of Ocean Energy Management (BOEM), indicates there is 508 GW of technically feasible offshore wind potential in Gulf of Mexico waters, equivalent to half of total US power generation capacity.

Offshore developers are using turbine advances and economies of scale to drive down costs.

In its study, NREL found that some Gulf of Mexico sites could host zero-subsidy offshore wind power soon after 2030. Based on a 600 MW wind farm with 10 MW turbines, the estimated levelized cost of energy (LCOE) could be as low as $70/MWh for sites near the shore in Texas and western Louisiana, it said.

"Cost trajectories from the modeled data indicate that costs will continue to decrease beyond 2030 and that the cross-over for economic viability may be just beyond this time horizon," it said.

Turbine capacities are rising fast and this could accelerate cost reductions. Siemens Gamesa plans to install its new 14 MW model in Virginia by 2026.

Net value of offshore wind in Gulf of Mexico (2030) 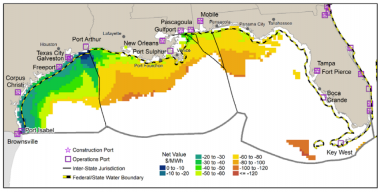 Source: NREL report 'Offshore Wind in the US Gulf of Mexico: Regional Economic Modeling and Site Specific Analyses,' May 2020.

The competitiveness of Gulf of Mexico offshore wind projects will depend on new technology solutions that optimize the unique site conditions, experts told New Energy Update.

Average wind speeds in the Gulf of Mexico are 7 to 9 metres per second (m/s), compared with 9 to 11 m/s in northern Europe. In addition, hurricanes regularly barrel through the Gulf, stressing structures and disrupting logistics.

These challenges are expected to increase capex, but the region also offers potential savings, including gains in operations and maintenance (O&M) efficiency, experts said.

Other potential customers include utilities operating in south-eastern states that border the Gulf and are not part of an organized electricity market, he said.

The gradual increase in water depth in the Gulf is conducive to turbine installation and other advantages include lower average wave heights, shallow water and proximity to oil and gas infrastructure and expertise. Floating wind developers looking to install in deeper water areas could also benefit from local oil and gas manufacturing and offshore engineering resources.

The main challenges for Gulf of Mexico developers will be lower wind speeds, softer soils and hurricane risk.

Gulf of Mexico projects may require turbines with longer rotor diameters and blades with lower solidity than in other offshore wind markets, to maximize efficiency, Celata said.

The low average wind conditions may require "increased rotor diameters, with specific power ratings between 230 W/m2 and 300 W/m2," NREL said in its report.

The soils and wind speeds favor jacket-type substructures rather than monopiles, NREL noted.

In total, the enhancements required for lower regional wind speeds are expected to increase turbine costs by 3 to 14%, depending on the site, it said.

Developers can use the experience of regional oil and gas players to design appropriate substructures, Celata noted.

Project partners will need to conduct site-specific risk assessments to identify design enhancements or load mitigation strategies, as commonly-used design standards set by the International Electrotechnical Commission (IEC) do not cover all the risks, NREL warned. Load mitigation could include on-board power supply to maintain yaw functioning through the storms.

Insurance costs could be 25% higher than in other offshore wind regions, NREL said.

The financial cost of lower wind speeds and hurricane mitigation in the Gulf of Mexico may be offset by other benefits, such as lower average sea states and warmer ocean waters that reduce O&M costs, Celata said.