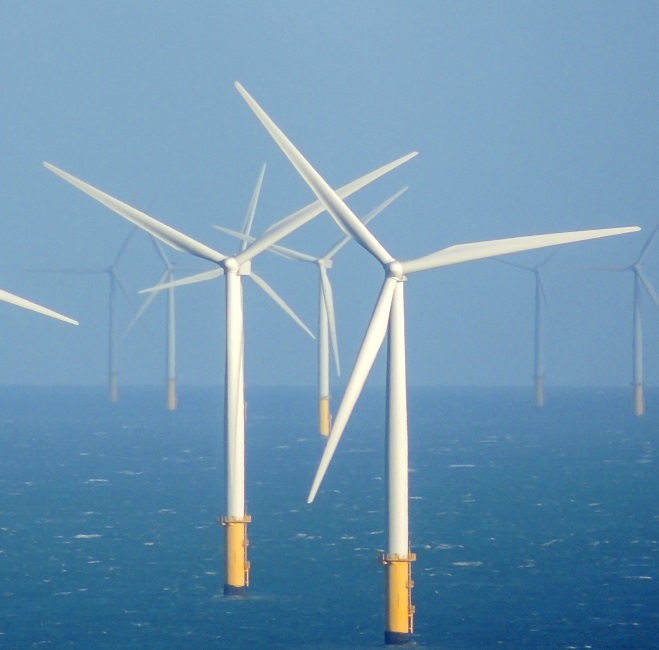 Turbine advances and installation learnings are driving down offshore wind costs as the sector looks to a future without subsidies. (Image credit: VladCa)

Last September, the UK government awarded three new offshore wind contracts at prices as low as 57.50 pounds per MWh, half the price of contracts awarded in the last UK tender in February 2015. This followed record-low prices in Denmark, Netherlands and Germany. 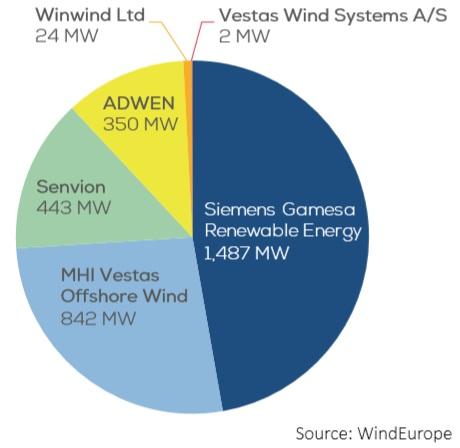 Developers are also leveraging economies of scale to drive down costs.

The average capacity of grid-connected offshore farms rose by 34% in 2017 to 493 MW, WindEurope said.

As the below chart shows, the UK and Germany continued to dominate offshore wind development in 2017. 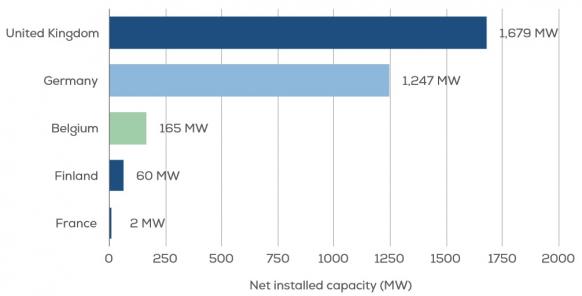 Europe’s installed offshore capacity was 15.8 GW at the end of 2017. WindEurope predicts offshore installed capacity will hit 25 GW by 2020.

AT&T has agreed to purchase 520 MW of wind power from Nextera Energy Resources in one of the U.S.' largest ever corporate renewable energy deals, AT&T announced February 8.

AT&T, the world's largest communications company, will purchase 220 MW of power from the Minco V Wind Farm located in Caddo County, Oklahoma and 300 MW from a wind farm in Webb and Duval Counties in Texas. 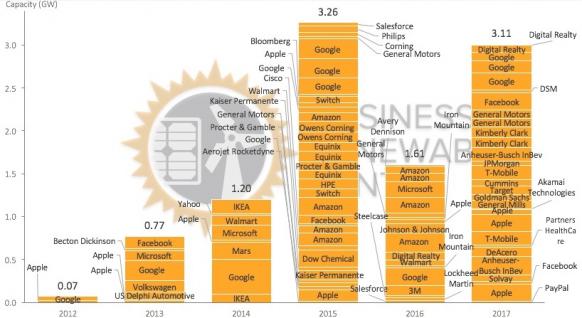 "In those countries, policy mechanisms allow developers to secure subsidies, while also giving corporations the ability to receive certificates to meet sustainability targets," it said.

AT&T has also agreed to sign up to the Corporate Renewable Energy Buyers Principles, an initiative led by the World Wildlife Fund, it said.

AT&T is also a member of the Business Renewables Center, an initiative that, along with the Buyers’ Principles, forms part of the Renewable Energy Buyers Alliance.

US set to unlock more federal lands for renewables projects

The U.S. Bureau of Land Management (BLM) is to consider opening up more federal desert lands in California to renewable energy development, the BLM said in a statement February 1.

The BLM has opened a 45-day public consultation on the Desert Renewable Energy Conservation Plan (DRECP), which covers an area of 10.8 million acres.

In September 2016, the BLM made available only 7% of the area for renewable energy leasing.

The BLM's announcement is a direct response to an order from President Trump to review regulations that unnecessarily impede energy development.

Executive Order 13783, “Promoting Energy Independence and Economic Growth,” directs government agencies to review all actions that could potentially burden the development or use of domestic energy sources.

“We need to reduce burdens on all domestic energy development, including solar, wind and other renewables,” Katharine MacGregor, Principal Deputy Assistant Secretary for Land and Minerals, said in a statement.

Last July, NRG Energy announced it would sell between 50% and 100% of renewables assets held by its NYLD business. The group said it would aim to raise up to $4 billion through targeted asset sales and reduce debt by $13 billion.

NYLD has a market capitalization of $3.2 billion and operating capacity of 5.1 GW, spread across wind, solar and fossil fuel assets. The portfolio has an average remaining contracted life of 16 years.

NRG’s renewables O&M business operates 2.4 GW of renewable power generation in 17 states. NRG’s renewable energy development arm has developed 630 MW of projects which are subject to a "right of first offer" from NYLD and has a total U.S. development pipeline of over 6.4 GW, according to the latest information from NRG.

"We view each of the three acquired businesses – the NYLD stake, the O&M business, and the development business – as highly complementary and well positioned to capitalize on the increasing market demand for low cost, clean energy," Adebayo Ogunlesi, Chairman and Managing Partner of GIP, said.

GIP has already invested or committed $9 billion of equity to the renewable energy sector, including 8 GW of operational renewable assets and over 14 GW of projects under construction or in development.

Since its IPO in July 2013, NYLD's cash available for distribution has risen from $91 million to $260 million while the quarterly dividend per share has climbed 150% to $1.15 per share, annualized at the end of 2017, Christopher Sotos, President and CEO of NYLD, said.

“With today’s announcement, NYLD can look forward to its next phase of growth, including solidifying near-term objectives through the most recent [new development] transactions and, most importantly, aligning with GIP, whose strategy and breadth of global investment capabilities are well suited to our business model and long-term objectives,” Sotos said.

NRG operates almost 50 GW of U.S. power generation. The company transformed from a conventional energy business into a diversified renewables and fossil fuel power generator, but its share price suffered.

Following pressure from activist investors, NRG agreed in February 2017 to conduct a strategic review of its business and examine potential asset sales.