The Misurata Free Trade Zone, centered around the city of Misurata in Libya, has drawn up plans for CSP projects (Image: Mrwan elGobee / Wikimedia Commons)

Libya’s Misurata Free Zone (MFZ) has signed a memorandum of understanding with consultancy iQ Power to develop integrated CSP and PV projects with up to 300 MW total capacity.

MFZ, the first free trade zone established on Libyan territory, has shown its desire to develop a solar energy industry, according to a iQ Power. As its partner, iQ Power, an American company established with the sole purpose of developing renewable energy in the Middle East & North Africa, is studying how CSP, PV, or hybrid can best be utilized and optimized given the need for reliable and continuous power.

The consortium behind the MFZ has developed a master plan to build on a turn-key basis integrated PV and CSP solar power energy projects up to 300 MW, and to bring a minimum of $500 million in foreign direct investments to the Libyan economy. It has also expressed its interest in constructing a seawater desalination plant utilizing in part or in whole solar energy as its source of energy to meet the growing needs of the city of Misurata.

“Sustainable energy development is a step towards stability, reconciliation and reconstruction for Libya and all Libyans,” said Sherif Elhelwa, chairman of iQ Power. He pledged a non-partisan, transparent and open process to welcome participation in the process by all Libyans, and to work with the local and national agencies and authorities to maximize efficiencies and shared wealth.

The project will bring together top US and European engineering, procurement and construction companies, as well as technology and service providers, all of whom have an impressive combined track record in the field of solar energy, according to iQ.

iQ is in discussions with France's top scientists and companies, along with US National Renewable Energy Laboratories, to bring the smartest and latest engineering designs in the solar energy industry to make Misurata Free Zone a state-of-the-art example for solar energy in North Africa.

Several of the CSP industry’s most experienced players have expressed interested in being involved in projects in Australia, according to the Australian Renewable Energy Agency (ARENA).

Thirty-one engineering firms, technology providers, and industry associations from around the world responded to ARENA’s request for information on CSP projects, among them nine companies with more than 1 GW of CSP projects in their portfolio. 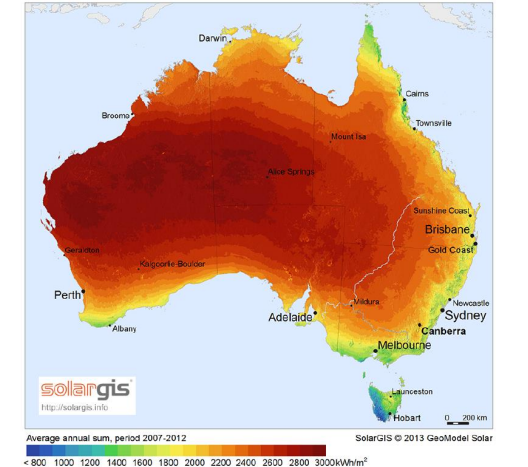 In a summary of the various submissions, ARENA said proponents capable of delivering CSP systems were willing to design and build these in whichever configuration between continuous output and peaking that is requested or motivated by the commercial arrangements offered. The overall view was that flexible operation with between four and 10 hours of storage is probably optimal for Australia’s main-grid.

Regarding location, the broad consensus was that direct normal irradiance needs to be above 2,000/kWh/m2/year for projects to be viable. This implies that anywhere west of the Great Dividing Range (the mountain range dividing the heavily-populated eastern seaboard from the rest of the country) can be considered, ARENA said.

The major issue for many companies was the desirable size of a CSP plant regarding rated power capacity. There was a broad consensus that greater than about 50 MW is needed because of economies of scale and that plants up to 300 MW can readily be contemplated. Beyond that size, increasing losses in energy transport pipes or of reflected radiation from heliostats outweighs further economy-of-scale advantages or turbine-efficiency improvements.

SolarReserve and Oz Minerals have agreed to commission a new high voltage electricity transmission line in South Australia. The power line will meet both companies’ current operational requirements and accommodate their respective growth strategies for the region.

Collaborating on a single line also minimizes impacts on the landscape, helping to protect the environment and Aboriginal heritage, SolarReserve said. 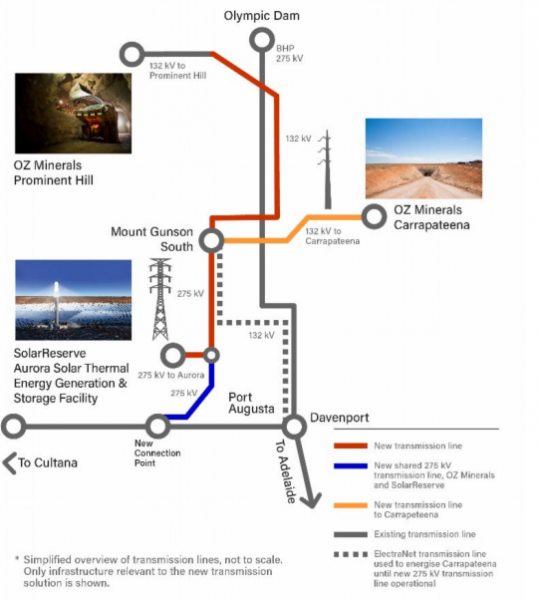 The new power line will serve Aurora and nearby mining projects (Image: SolarReserve)

Solar Reserve will begin construction on its Aurora project in South Australia by mid-2018 and should begin generating power around the end of 2020. Oz Minerals is the sole owner and operator of Prominent Hill, a copper-gold mine in northern South Australia. It is also developing a copper-gold project at Carrapateena, 160 km north of Port Augusta, the closest town to Aurora.

The power line will be 270 km long, with OZ Minerals and SolarReserve equally sharing operational costs for the first 35 km of the line. ElectraNet has been engaged to provide preliminary services for the design and tender of the new transmission line solution. Preliminary work is underway, with the line expected to be operational by mid-2020.