SolarReserve is on schedule to to begin generating power at its Aurora project in South Australia around the end of 2020 and is in talks with half-a-dozen groups about becoming equity partners, CEO Kevin Smith has told CSP Today. 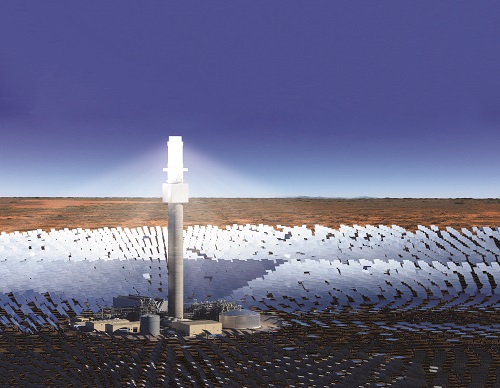 The South Australian government granted SolarReserve development approval for the 150 MW Aurora project last month. Construction on the plant will begin in mid-2018, and will take 30 months to complete. The plant includes a 240m tower, and will generate 495 GWh/y of electricity. The state government has signed an offtake agreement with SolarReserve; the power generated from Aurora will be enough to meet 100% of the government's power needs, including public buildings such as schools and hospitals.

A few things still need to be finalized, including debt-equity structure, contractors, and water and electricity connections to the plant, Smith said. SolarReserve has been in discussions with around half-a-dozen Australian and non-Australian groups about becoming equity partners in the $650 million project, and will make an announcement on its equity and debt structure in the next two to three months, he said. Aurora will require only about 25-30% of the amount of water used at conventional coal plants of the type which once existed in the nearby town of Port Augusta, one of the reasons residents were enthusiastic about bringing solar thermal to the region.

Shades of Nevada and South Africa

American firm SolarReserve has established itself as a major player in the past few years with multiple projects in three separate locations: Nevada, South Africa, and Chile. Its three projects in Chile’s Atacama Desert enjoy the world’s best solar resource, thanks to a combination of high altitude and high number of sunlight days, Smith said. However, the sites in Nevada and South Africa have similar specifications to Aurora – which enjoys direct normal irradiance of around 2,450 kWh/m2/year and is located just 30 km north of the town of Port Augusta.

Although the offtake agreement has SolarReserve supplying the state government with 100% of its own electricity needs, the government wants Aurora to inject in peak periods. At 10am, when most public buildings are open but power prices are otherwise low, the government will purchase from Australia’s National Electricity Market, which facilitates the cross-state operation of the wholesale electricity market, Smith said. 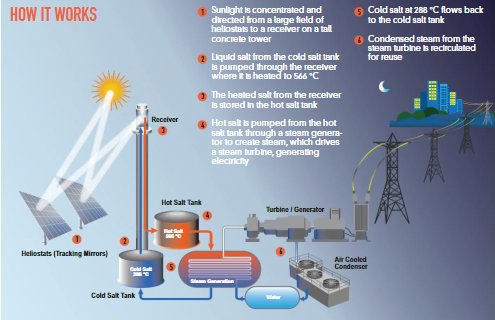 In a solar thermal system with energy storage, the heat transfer medium - molten salt - retains heat so well that it enables the plant to generate electricity when the sun is not shining (Image: Solar Reserve)

Aurora is being built with eight-hours storage, the equivalent of around 1,100 MW energy storage, “so really the SA government will want us to generate during the day and then inject at the peak hours to try to bring down those (electricity) prices during the high-demand periods,” he said.

“We might run from 12 midday to 9 at night, because that’s the (peak) period; so we could generate at a couple of peaks per day – say four to five hours – turn off for a couple of hours, and then bring it back later in the day.”

Smith credited the storage with allowing SolarReserve “to take advantage of market economics” and guarantee the SA government a maximum purchase price of A$78/MWh ($62/MWh).

The South Australian government has been aggressive in its policy of encouraging renewables projects, with Tesla opening the world’s largest lithium-ion battery next to the Neoen-operated Hornsdale Wind Farm late last year. Tesla chief Elon Musk agreed to build the battery after Australian billionaire Mike Cannon-Brookes called on his company to end South Australia’s energy problems. The Tesla battery has the capacity to power 30,000 homes for up to an hour in the event of a blackout. Smith noted that the SolarReserve and Tesla projects have different roles in the South Australian energy market, with Tesla designed to meet short peak periods, and Aurora daily peak loads.

Whereas one billionaire convinced Tesla to come to South Australia, the voice of the entire Port Augusta community was behind the push to bring SolarReserve to the state. Repower Port Augusta was founded by locals five years ago on a platform of bringing solar and wind in place of Australia’s two oldest coal plants, Playford B and Northern. Some of the group members walked the approximately 300 km (186 mi) from Port Augusta to the state capital Adelaide, and put up signs outside the premier’s office demanding that he bring solar thermal to their region. Others, including broadcasters from the local radio station, called SolarReserve to tell their story.

“Typically we’ve had strong local support” Smith said, “but we’ve never quite seen this local proactive action to really solve a problem that they identified – which was the closure of a large (coal-powered) generator that employed a lot of people.”

Smith and some colleagues went to the region to look at land options, and when the state government launched a renewables tender – they were well placed to win. “It started with a few local people and grew to hundreds, billboards, radio interviews, and it attracted us; we have the technology,” he said.

SolarReserve will employ 650 people in the construction stage, with an estimated 4,000 direct and indirect jobs to be created in that period. This is significant given there are just 14,000 people living in Port Augusta and an additional 15-16,000 within an hour’s drive of the town.

Australia is now firmly on the CSP map, and Smith confirmed that SolarReserve is looking at additional sites in South Australia as well as in the states of Western Australia and Queensland. However, he said Aurora is “99% of our focus right now”, and explained: “Getting the first project on the ground is always difficult, new technology for the region for investors and contractors to learn about. Once that first project is in the ground it makes it a lot easier to do follow-up projects.”