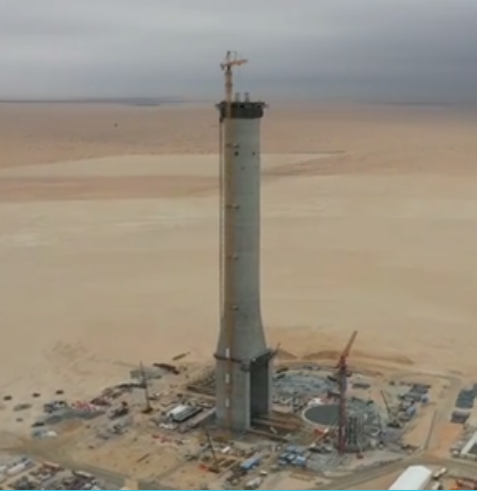 Led by Shanghai Electric, construction of Noor Energy 1 is on a tight schedule.

Aalborg CSP is supplying its header-and-coil steam generation technology for the 600 MW parabolic trough section. Manufacturing of 42 heat exchangers and pressure vessels is subcontracted to Shanghai Boiler Works and production was stopped in February following the outbreak of the coronavirus.

"With all employees wearing masks, the machines are up and running again and the work can continue under the safety measures implemented," Aalborg CSP said.

Since January, Shanghai Electric has worked with local partners to establish a specialist virus prevention and control team to protect staff while working on-site, it said.

Construction partners have been speeding up construction to meet a "commercial operation deadline of August 2021," Shanghai Electric said.

The facility is being brought online in phases in 2020-2022. The first parabolic trough plant and central tower unit were previously scheduled to be completed by October 2020.

The escalating coronavirus pandemic has sliced power demand in Europe and the US, pushing down prices and increasing renewable energy share, data from grid operators show.

The closure of factories and offices has reduced business power demand and this has not been offset by residential demand. In some countries, travel restrictions could tighten in the coming days and weeks, further impacting power demand and asset operations.

In Germany, a manufacturing powerhouse, industrial demand could fall by up to 20% this year due to the coronavirus crisis, reducing power prices by as much as 7.8%, Enervis energy consultancy said. The share of renewable energy could rise from 42% to 45% this year, it said.

In the UK, the lockdown of all but essential workers reduced power demand by around 10%, increasing the share of renewable energy and putting some gas plants out of the money, the national grid said.

In France, national power demand has fallen 15% since self-distancing measures were put in place, national grid operator RTE said March 19. On March 17, France ordered people to stay at home unless they had to perform essential duties, after the closure of bars, restaurants and non-essential shops failed to limit congregations. On March 23, France enforced perimeter limits on civilians.

"There is no reference scenario that allows us to predict day-ahead demand as accurately as usual...RTE forecasters are having to adjust their forecasts in real-time," it said.

French power demand is rising more gradually than normal during the morning, hitting a lunchtime peak around 13:00 local time, then falling more sharply than usual in the afternoon ahead of the evening peak period, the grid operator said.

French power demand before, after lockdown

In Italy, where coronavirus fatalities have soared, power demand fell by up to 9% following a nationwide quarantine March 13, according to S&P Global Platts Analytics.

"Our forecasters are seeing load patterns that resemble those of snow days, when schools are closed and many are home during the day. These patterns include a slower than normal ramp of usage in the morning, and increased energy use in the afternoon," the ISO said in an earlier statement.

"Though the pandemic is affecting energy usage, weather conditions remain the primary drivers of system demand," the operator noted.

"We will continuously monitor these ever-changing trends in load patterns, and make the appropriate adjustments to calculate an accurate load forecast," it said.

Over the last six months, the plant has generated 74.9 GWh of electricity, of which 67.1 GWh was delivered to the grid, Supcon Solar said.

Since January, the average monthly fulfilment rate has remained above 100%, the company said.

Typical fulfilment rates are 70 to 80% for the first year of operations, it said.

The plant has run for 158 of the 182 days in the six month test period. Production was halted for 24 days due to cloudy weather and there were no shutdowns due to equipment failure.

In the coming months, the project partners will focus on enhanced system efficiency and meeting the designed annual generation requirements, Supcon Solar said.

RayGen Resources has secured A$3 million from the Australian Renewable Energy Agency (ARENA) to conduct a feasibility study for a pilot CSP plant that uses water as storage medium, the company announced.

Located at Carwarp in north-west Victoria, the facility would deliver 4 MW of solar power generation, including 17 hours of 3 MW storage capacity. RayGen aims to reach financial close this year and commission the facility in 2021, it said.

The RayGen hybrid design uses heliostats to reflect sunlight onto a tower-mounted photovoltaic receiver. The receiver contains 400 modules which generate electricity and heat.

Energy is stored through thermal hydro, using two reservoirs with a temperature difference of 90 degrees C. Stored energy is dispatched as power via a thermally-driven Organic Rankine Cycle (ORC) engine.

"The project will also supply synchronous power where it is critically needed in the West Murray region," it said.