The global nuclear company is using its modular build and design approval experience to shorten the development time and raise the competitiveness of its Small Modular Reactor (SMR) design, Mick Gornall, Westinghouse's Vice President and Managing Director for the UK and Middle East, said at the SMR UK Summit.

Toshiba-owned Westinghouse is one of a number of international firms shortlisted in the U.K.'s competition for the best value SMR design.

The U.K. government consulted competition participants over the summer and is expected to announce an SMR industry roadmap in the coming months. To inform its decision, the government commissioned a Techno-Economic Assessment of SMR deployment, including a study on the technology readiness of different reactor designs.

Westinghouse believes its integrated pressurised water reactor SMR technology has demonstrated the highest technology readiness levels and the company could deploy in the UK as early as the mid-2020s, Gornall told the SMR UK Summit on October 18. This would coincide with the UK government's plan to close all unabated coal-fired generation by 2025.

Westinghouse's SMR plants would consist of 225 MW modules and use passive safety features and many similar components used in the AP1000 large scale reactor. The SMR design has been kept as simple as possible to leverage modular construction processes and optimize costs.

In an interview with Nuclear Energy Insider, Gornall said the Westinghouse SMR will be "very competitive" in the SMR market. This will be largely due to the integral design, “right-sizing” to replace retiring fossil-fired capacity and power density, he said.

“Our other efforts to optimize the manufacturability right from the start, and the need for less infrastructure at suitably selected sites will allow us to be competitive across the energy market," he said. 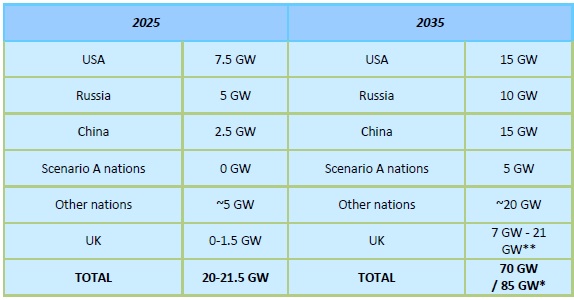 Large-scale nuclear plant projects have typically yielded low learning rates of around 1-3%, compared with around 10% for renewable energy technologies, but SMRs will improve on this, Miranda Kirschel, Energy Advisory, EY, told the conference. EY recently completed a cost impact study for UK SMR deployment which forms part of the government's Techno-Economic Assessment.

Higher learning rates for SMRs would depend on a commitment to modularity, the ability to standardize the design and a global pipeline of customers, Kirschel said.

Westinghouse has already improved modular build efficiency on its ongoing AP1000 projects, Gornall said. Learnings to be passed on to SMR build include the qualification of multiple vendors to support module fabrication and engineering improvements that enhance constructability and manufacturability of components to drive delivery certainty for customers, he said.

"The feedback we got from the AP1,000 projects is that we are learning very quickly-- to the point where the later reactors are actually catching up with the first one now because the learnings are being deployed to the subsequent construction projects."

Westinghouse plans to manufacture modules at UK facilities and ship them to site where they can be assembled into larger modules and installed on-site, Gornall said.

"We have laid out a manufacturing and assembly plan for the plant, and will refine this through projects such as the one we just recently commissioned with the [UK Nuclear Advanced Manufacturing Research Centre]," he said.

Westinghouse and the Nuclear AMRC are conducting an advanced manufacturing study to explore potential design efficiencies and reduce build times. The most recent work also involved Cammell Laird, which has significant experience in design, manufacture and transport of large complex modules to safety critical sectors.

"Particular technologies that we are working on at the moment are things like additive manufacturing or 3-D printing, advanced modelling technologies, machine and factory automation and Hot Isostatic Pressing," Gornall said.

According to EY's Kirschel, advanced manufacturing techniques for SMR components would have a relatively low impact on CAPEX, and the most notable savings would be found in the automation of high-volume welds, advanced forging, rapid body metrology, high-energy density welding, laser cladding and high-intensity casting.

"Efficiencies can be delivered through shared set-up and site infrastructure,” she said.

Westinghouse expects the UK Generic Design Assessment (GDA) for its AP1000 to be completed by March 2017 and the company believes its regulatory experience in the US and UK will help accelerate the approval process.

The U.K.'s Office for Nuclear Regulation (ONR) has estimated the duration of the GDA for larger reactors at around five years but Westinghouse expects a much faster process for its SMR design.

Indeed, while a recent report by the Energy Technology Institute estimate the GDA for SMRs to take around five years, competing SMR developer NuScale has earmarked just four years for the approval of its design.

Westinghouse has been working with the ONR on the GDA for its AP1000 since 2008 and the SMR design approach was to not challenge any of the existing UK licensing requirements, Gornall said. Much of the SMR systems, such as the Instrumentation and Control systems (I&C), are the same as those on the AP1000 and passive safety systems offer the same functionality "albeit in a different configuration," he said.

"For us this will not be a [first of a kind] effort...We do intend to leverage the familiarity the ONR has both with [pressurised water reactors] in general, and with Westinghouse designs specifically, to minimize the review time," he said.

"Effectively, the government has two paths that it can go down, it can go down the IPWR light-water route if it wants quicker results, it could go down a non-IPWR [route] if it wants a different context," Richard Beake, project director at Atkins engineering consultancy, told the SMR UK Summit.

"In terms of UK opportunity, the non-IPWR designs have further to go in development work so there is an opportunity for more UK input into those designs but at the price of higher risk, higher uncertainty and longer timescales," Beake said.

SMR developers are now urging the government to move quickly on its deployment plan so that the UK can position itself as a leading SMR technology exporter.

EY’s SMR cost impact study has found that a single UK SMR design would be more cost-effective than having multiple designs and the UK market alone is not big enough to realize the true economic benefits of SMR deployment.

Gornall said the UK now has a real opportunity to build a sustainable SMR industry.

“The market is out there... It's a finite market and the first to market will have a real advantage," he said.