What is Social VR?

Everything you need to know – welcome to Social VR 101. 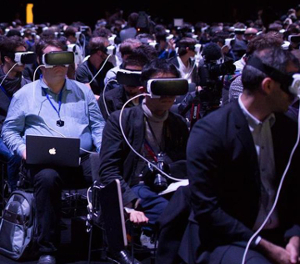 In 2014 Mark Zuckerberg, founder and CEO of Facebook, made a bold statement through his acquisition of Oculus VR.

By spending US$2 billion to buy the company who kicked off the current Virtual Reality craze, Zuckerberg publicly announced with his metaphorical loud hailer that VR is the next big thing in tech.

But how exactly does social converge with virtual reality? Here’s everything you need to know about Social VR.

Part of the promise of VR is the augmentation of activities we undertake today. Facebook have already created an internal team to, “explore how people can connect and share using today’s VR technology, as well as long-term possibilities as VR evolves into an increasingly important computing platform”.

Zuckerberg says his new team, headed up by former games developers Daniel James and Michael Booth, are working on tools that will allow Facebook friends sitting in different parts of the world to feel like they are spending time in the same room.

Facebook have also become a major distributor of 360 degree video. With more than 20,000 videos already available on the platform and hundreds being uploaded daily, Zuckerberg claimed that millions of users have already interacted with VR content through Facebook when he took to the stage at Samsung’s Mobile World Congress earlier this year.

As the cost of devices that capture 360 degree video continue to fall and the number of devices that allow the consumption of VR content increase, Zuckerberg’s vision for the future is that rather than simply reading a friend’s notification on your Facebook wall, you’ll be able to practically delve into their memories through personal 360 degree videos.

A lot of the press coverage in recent months has been around Virtual Reality gaming. That’s hardly surprising when games arguably represent the easiest way to show off what the tech is capable of outside of 360 degree video.

We’ve only just seen the arrival of the first consumer-ready True VR headsets, the Oculus Rift and HTC Vive, and Sony’s PlayStation VR will arrive before the end of 2016: each of which carry a heavy gaming message.

But some reviewers, such as Adi Robertson from The Verge, have spoken of the isolating experience that the first round of VR games offer.

However the true value of VR is almost certainly yet to be realised, and as NDreams’ CEO Patrick O’Luanaigh pointed out in his Develop OpEd, the ability to interact with other people in virtual reality can be “magical”.

A headset for me, a screen for you

Many of the VR headset developers are already seeing beyond the display in the headset itself to think about others around you.

SteamVR, primarily experienced through the HTC Vive, will display a single screen version of what the VR wearer is experiencing on a PC display, so that other people in the room can see what you’re up to.

Sony could be going one step further with PlayStation VR, allowing developers to create experiences that allow completely different displays for the HMD wearer and other spectators.

This information gap creates a wealth of opportunity for the innovative developer, just ask the creators of Keep Calm and Nobody Explodes if you don’t believe me.

Social VR also promises to revolutionise the cinema-going experience; an institution that has changed little in the past 75 years.

The initial throes of this endeavour concentrate on the production of 360 degree movie experiences. However the creation of social spaces, within which users can enjoy more traditional films, could effectively turn a lonely movie-watching experience into a social one.

Many have argued that human beings are inherently social animals. The creation of the internet has brought with it a slew of social platforms that allow people to share practically anything, and Social VR promises to take the human drive toward sociality one step further.

Get in touch with the author of this article on twitter: @ClacTom

What do you make of Social VR? Let us know in the comments below.