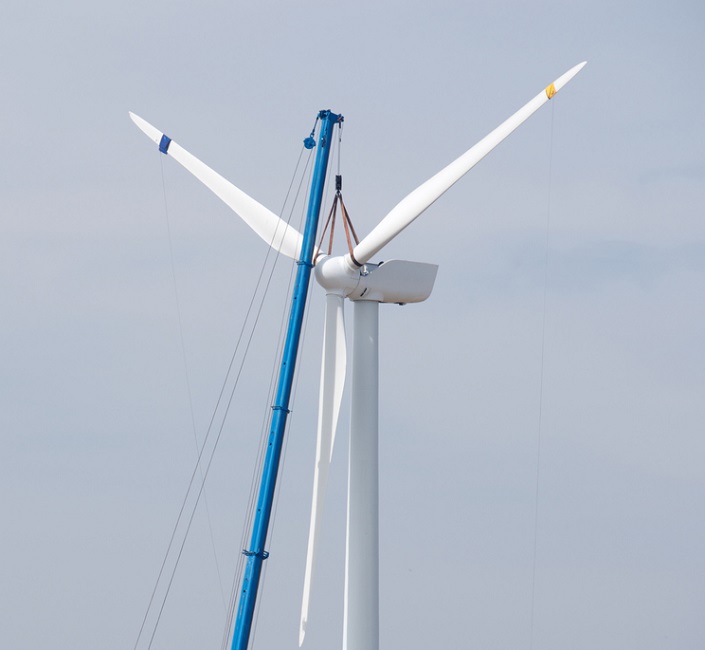 The teams will each receive $400,000 of DOE funding to design a generator for turbines of capacity over 10 MW. The projects will aim to reduce the size and weight of wind turbine generators by 50% and reduce the cost of energy generation by up to 25%, the DOE said.

Following a design and analysis phase, DOE will select one project to receive up to $6.4 million to build and test a scaled prototype on a wind turbine.

Turbine capacities are set to soar in the coming years and the new drivetrain technologies could significantly reduce construction and logistics costs for onshore and offshore projects.

If developers can overcome materials and cooling challenges, these new units could also significantly reduce operations and maintenance (O&M) costs, a growing component of project costs.

• ABB will develop a lightweight double-stator generator including an advanced magnet cooling system for turbines of up to 15 MW.

• WEG is to develop a permanent magnet direct-drive lightweight generator.

ABB is the only developer using a double-stator concept, where the stators are located on either side of the generator rotor.

"So these designs will have to address cooling and insulation," the experts said.

American Superconductor Corporation and GE will develop different types of superconductor generators. These concepts create a much stronger magnetic field than conventional designs, using superconducting windings. This significantly reduces the size and mass of the generator and eliminates the need for permanent magnets and rare earth materials.

• American Superconductor Corporation is developing a lightweight generator using high-temperature superconductor (HTS) materials rather than magnets in the rotor to reduce weight.

Superconductor technology eliminates the ‘Ohmic’ losses in conventional conductors and enables the reduction of ferromagnetic iron in the generator and operation at higher magnetic fields, Kiruba Sivasubramaniam Haran, Associate director of the Grainger Center for Electric Machinery and Electromechanics at the University of Illinois, told New Energy Update. Haran's previous roles include Manager of GE's Electric Machines Laboratory.

“This can lead to significant improvement in power density and efficiency,” reducing the weight of the generator by as much as a half, Haran said.

LTS designs benefit from good availability of low-cost LTS wire in lengths needed to wind the generator. Unlike HTS designs, the wire does not require splicing.

However, LTS developers must create an efficient method for maintaining the windings at low temperatures. The windings need to be cooled to around 4 degrees Kelvin (minus 269 degrees C) and this has typically required the use of liquid helium cryogenic processes. GE’s design will use technology from the magnetic resonance imaging industry to cool the field coils which would not require a continuous supply of liquid helium.

HTS designs allow a higher operating temperature of the generator windings than LTS designs, up to around 40 degrees Kelvin (minus 233 degrees C), which reduces the cooling requirements for the machine.

“The challenge with HTS machines is that the winding material is as much as two orders of magnitude more expensive compared to LTS, and it comes in relatively short lengths, necessitating many splices," the DOE experts said.

"However, it is much easier to cool an HTS design...More research is necessary to determine what the breaking point is between the upfront costs and the overall cooling system," they said.

The elimination of the gearbox in the direct drive designs could have a major impact on O&M costs for onshore and offshore applications.

Larger, higher efficiency turbines are putting increasing pressure on gearboxes and other major plant components and raising the importance of turbine downtimes.

Gearboxes remain a key source of failure, often due to bearing issues. A quarter of turbine gearboxes and generators need replacement within ten years of operation, IHS Markit said in a recent report.

The new direct drive technologies will operate at much higher flux densities than conventional designs and the impact of this on maintenance costs is yet to be fully tested, the DOE experts noted.

For superconductor designs, developers will need to test the reliability of advanced cryogenic cooling systems.

The cooling systems need to be “matured to the point maintenance requirements are minimal,” Haran noted.

In October, GE unveiled a new two-piece blade design which can be assembled on site, reducing transport risks.

The reduced weight of the direct drive turbines should mean they would remain within shipping limits for road and rail transport, even for larger capacity turbines, Haran said.

This would lead to a "significant reduction in logistics costs,” he said. “Especially if the direct drive generators can be small enough to fit on rail cars.”

For a floating wind farm, the weight of the drivetrain represents about 25% of the overall weight of the turbine and plays a major role in foundation requirements, according to DOE figures.

The floating foundation represents nearly 50% of the total cost while the drivetrain represents around 18-25% of the cost.

Successful demonstration of these cutting-edge technologies could lead to the launch of commercial products in the next seven to 10 years, according to the DOE.

Developers of superconductor generators must focus on minimizing costs and improving the reliability of the cooling systems to reduce maintenance requirements, Haran said.

"The higher temperature conductors tend to be expensive, but can help simplify the cryogenic cooling system," he noted.

"Finding the right balance between these two costs will be key to a cost-effective solution," he said.