US wind activity rises 28% on year as PPAs flow; Germany agrees to auction 4 GW of wind 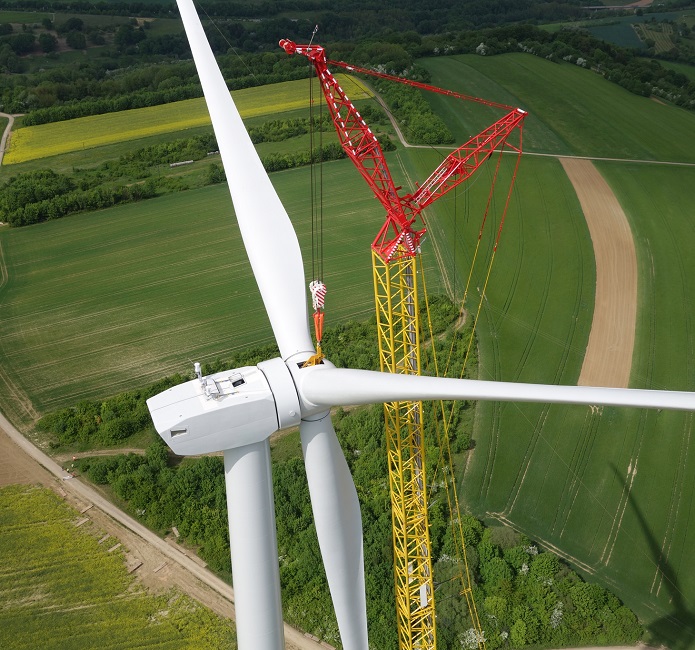 U.S. wind projects in advanced development rose by 4.5 GW in Q3 to hit a record 38.0 GW, some 28% higher than a year ago, according to the latest figures from the American Wind Energy Association (AWEA).

Construction began on 2.2 GW of projects in July-September, while 2.3 GW of projects entered the advanced development phase, meaning they achieved a key project milestone such as the signing of a turbine order or power purchase agreement (PPA).

Current U.S. wind activity is being supported by production tax credits (PTCs) which are being scaled down annually. While development activity is strong, the rate of completed new installations remains behind previous years. 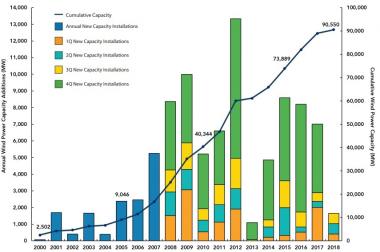 Larger capacity turbines are driving down wind costs and developers ordered the U.S.' first 4 MW onshore turbines in the last quarter, AWEA said. In comparison, the average capacity of newly installed turbines in the U.S. in 2017 was 2.3 MW.

According to AWEA, GE Renewable Energy held a 63% share of the U.S. wind turbine market in the first three quarters of 2018, while Denmark's Vestas claimed 26% and China's Goldwind held 10%.

US wind power purchase agreements in 2018 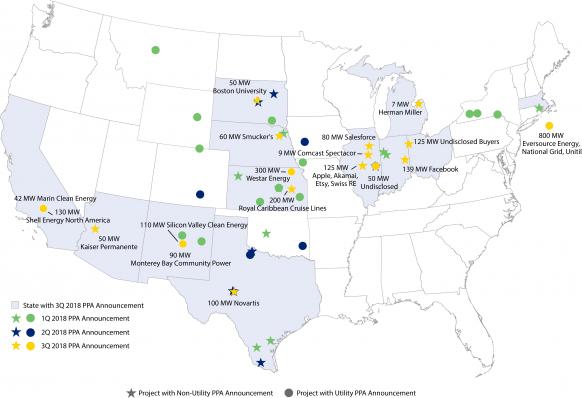 Germany's coalition government agreed last week to auction a further 4 GW of onshore wind capacity and 4 GW of solar in 2019-2021.

The new capacity will come a year later than originally planned, but the agreement is a better outcome than the wind industry expected following political gridlock over the issue, industry group WindEurope said in a statement.

"Having clarity on these additional volumes is very important for developers and the supply chain," it said.

"What we really need to see now is a firm commitment on the auction schedule up to 2030," the industry group said.

"[Germany's] coalition say they will deliver this at the end of 2019. This extra visibility is key to keep cost reductions going and to ensure we keep jobs in the European supply chain," it said.

Due online by late 2020, the $300 million pilot project will consist of two 6 MW turbines and will be developed by Orsted, the world's largest offshore developer by capacity. LE Meyers will perform onshore electrical design and construction. The project will be funded through existing base rates, Dominion said.

The project will provide installation and operations data to aid the development of a larger project in an 112,800-acre commercial wind site lease held by Dominion.

Orsted and Dominion have already agreed to exclusively discuss the potential development of up to 2 GW of offshore wind capacity in Virginia.