Ireland's offshore wind development has been boosted by the European Commission's decision to prioritize an Ireland-UK interconnector program and national regulatory issues must now be resolved to ensure construction, industry experts said. 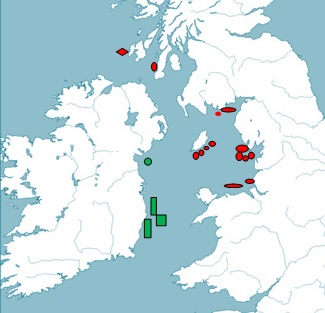 The European Commission (EC) announced November 18 it had given priority status to ISLES, a cluster of Irish Sea grid projects which would transmit power from proposed Irish offshore wind farms to the UK grid. There are currently five Irish offshore windfarm projects for a total 2.6 GW of capacity.

The inclusion of ISLES in the EC’s list of “projects of common interest” allows the grid developers to access accelerated permit procedures and extra funding sources. It represents a significant step towards an export market for offshore wind, with the Oriel, Codling and Dublin Array Irish Sea projects slated for completion in 2021, 2022 and 2023 respectively.

“The amalgamation of ISLES under [EC projects of common interest] 1.9.2 is welcomed as it reflects the coordinated approach envisaged by ISLES to the joining together in a cluster of the proposed Irish offshore wind farms prior to eventual connection to the UK,” Britton told Wind Energy Update.

At the same time, progress is being made on a planned Ireland-France link which would provide Irish offshore wind projects with a second export market.

Ireland led early development of offshore wind with the 25 MW Arklow Bank array commissioned in 2004, but sector growth has been stunted by limited local demand for large scale renewable power.

Renewable power provided 20% of electricity consumed in 2013, with 16% provided by wind farms, according to the latest annual data from Ireland's Sustainable Energy Authority Board (SEAI).

Ireland’s onshore wind power capacity rose by 222 MW in 2014 to 2.3 GW, according to figures from the European Wind Energy Association.

At the same time, Irish offshore developers have been hit by a lack of progress in regulation to export to the UK market. The Irish and UK authorities have disagreed over how to manage proposed interconnectors between Ireland and the UK, which led the NOW Ireland group to support the Celtic Interconnector project between Ireland and France, alongside its support for the proposed ISLES grid project to the UK.

In July, developers Oriel Windfarm Ltd and Gaelectric Signed a Memorandum of Understanding to co-develop some 870 MW of offshore capacity under the North Irish Sea Array (NISA) plan.

The developers have applied to Ireland’s Department of Communications, Energy and Natural Resources for this demonstration plant to receive the €260/MWh ($280/MWh) feed in tariff allocated to tidal power.

“Recently the Irish government has opened up a consultation around the technology types to be included under the feed-in tariff scheme,” said Gaelectric project manager Dr Mark Coughlan.

“We’ve made representations with regards offshore wind being included,” he said.

The demonstration project “will provide the necessary catalyst for further projects as proposed in ISLES,” Oriel and Gaelectric said in a joint statement.

The largest wind farm planned in the Irish Sea is the 1.1 GW Codling Wind Park, which was granted in 2005 a 99-year foreshore lease northeast of Wicklow.

According to project developers Fred Olsen Renewables and Hazel Shore, Codling will consist of around 220 turbines and the companies have submitted a planning application for a further 200 turbines in a potential second development phase.

Saorgus Energy is planning to build the 520 MW Dublin Array project and a potential fourth commercial project in the Irish Sea would be the extension of the Arklow Bank plant which was co-developed by Airtricity (now SSE Renewables) and GE Energy between 2001 and 2004.

Airtricity and Acciona Energy obtained a foreshore lease for a further 520 MW at Arklow Bank but in 2007 the company put the project on hold due to the “lack of Government support for offshore wind.”

In addition to the Irish Sea projects, a company called Fuinneamh Sceirde Teoranta has plans for a 100 MW offshore wind farm at the Skerd Rocks off the west coast of Ireland.

While the EC’s support for Irish-UK grid projects is clearly positive, the implications for developer costs are “difficult to evaluate pending further work around policy clarification at government level,” Britton said.

Further challenges lay ahead for the grid projects, as Ireland and UK have failed to agree over how interconnections between the countries would be managed.

The UK regulatory authorities have argued that market-based mechanisms should be put in place to exchange power, while the Irish administration has supported a more regulated system.

Recently, UK regulator the Office of Gas and Electricity Markets (Ofgem) sent positive signals by indicating it would provide some support for interconnections with Ireland.

In September, Ofgem granted the Greenlink Ireland-UK interconnector project a cap and floor regime, reversing its initial rejection of such regulation.

The Greenlink power cable would provide 500 MW of capacity between mainland Ireland and Wales, UK and is expected online by around 2021.

Under the cap and floor scheme, the regulatory authority sets limits on revenues for the interconnector operator, based on cost assessments submitted ahead of construction.

Britton said he expects further support on cap and floor mechanisms from the EC.

“[UK] Contract for Differences [CfDs] are linked to generation in the UK,” noted Tim Norman, managing director of Niras Consulting.

The UK currently only provides CfDs to offshore plants which generate in the UK, and these are validated by certificates of origination.

The UK regulatory bodies will need to open up these support measures to Irish offshore wind farms, otherwise these projects will look to the French market, where feed in tariffs can apply to energy from abroad.