Europe solar-storage costs fall below markets as learnings kick in

Solar plus storage costs are falling below wholesale power prices across Europe and deeper savings in capex and cost of finance lie ahead, authors of a new cross-industry paper told New Energy Update. 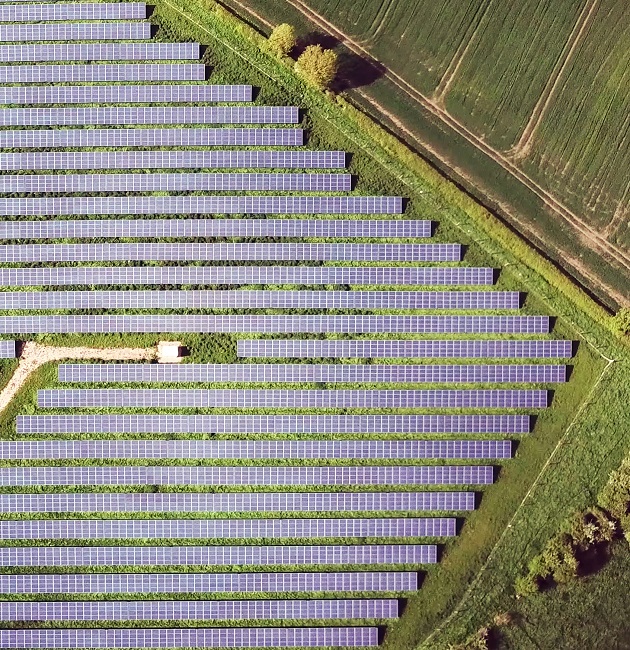 A new study of PV and battery costs at six European cities indicates solar plus storage costs are falling faster than previously expected.

By 2025, solar plus storage will be profitable in Munich, Germany and the northern city of Helsinki in Finland, the paper said.

Forecast LCOE of PV plus storage in six European cities

Stand-alone PV projects are already profitable in all six cities, the researchers said, however battery costs will fall significantly in the coming years and PV developers are increasingly turning to storage to maximize returns. As PV penetration grows, storage becomes more valuable and co-location can provide labor and equipment savings.

In the UK, Gridserve closed funding in March on a 35 MW solar plus 27 MW battery storage system in Hull, England. Funded by Investec Bank and Leapfrog Finance, Gridserve will sell the plant upon completion, along with a new 26 MW solar farm in Hull, to Warrington Borough Council.

"These will be the most advanced solar farms in the UK...We’ve completely rethought the solar model, looking in detail at how to maximize value at every step," Toddington Harper, CEO of Gridserve, said.

Bluefield Solar Income fund has also entered into discussions with developers to pursue storage projects as part of its next phase of solar deployment, the company said in a results statement September 19.

Growing installed capacity will lead to significant capex savings in the coming years and key cost drivers will include the rate of battery deployment in the automotive sector and the development of longer battery lifespans, authors of the EU PVSEC report told New Energy Update.

The most important cost drivers for solar plus storage projects will be capex cost reductions through design and installation learnings, and the cost of capital, Christian Breyer, Professor of Solar Economy at Lappeenranta University of Technology (LUT) and co-author of the EU PVSEC report, told New Energy Update.

Capex costs typically decrease by 12.5 to 20% every time the global cumulative volume of the respective component doubles, it said.

In its base case, the report assumes a relatively-high price learning rate of 30% for modules and learning rates of 20% for inverters and 7.5% for other balance of system components.

“The battery packs (consisting of battery cells) will have the biggest cost reduction, balance of system component prices will decrease less,” Eero Vartiainen, Solar Technology Manager at Fortum Growth Oy in Finland and another of the report’s authors, told New Energy Update.

EU PVSEC assumes price learning rates at 17.5% for the battery pack, 20% for the inverter, and 12.5% for other balance of system components.

Reductions in battery capex costs will largely depend on the rate of battery deployment in the coming years, the report said.

The annual global battery market was around 70 GWh in 2018, excluding consumer electronics. Long-term battery deployment is difficult to predict as it will depend largely on the take-up of electric vehicles, it noted.

(Based on different deployment rates) 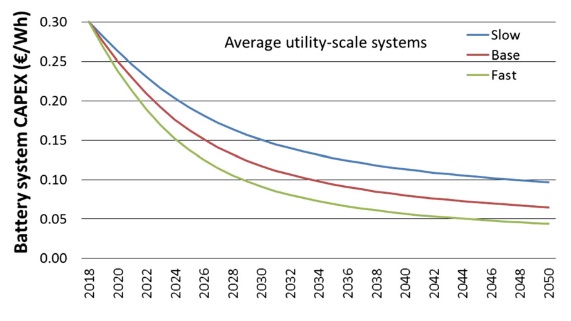 The co-location of unsubsidized solar assets with storage facilities can bring "efficiencies to construction costs and opportunities to optimize use of the grid connection,” Bluefield noted in its September 19 results statement.

Co-locating the PV and storage systems reduces installed costs by 8% for DC-coupled system and 7% for an AC-coupled system, according to studies by the U.S. National Renewable Energy Laboratory (NREL).

Coupled systems save on interconnection and permitting costs but also through shared hardware and installation labour costs, NREL said in a report published earlier this year.

In particular, sharing of system components such as switchgears, transformers, wiring and for DC-coupled plants, shared inverters, reduce the cost of co-located projects, NREL said. Electrical balance of system costs for co-located DC-coupled and AC-coupled projects were around 30% lower than stand-alone PV and storage plants, it said.

Wider deployment of solar plus storage in the coming years will help reduce the cost of capital, currently a significant portion of total costs.

The EU PVSEC report assumes a weighted average cost of capital (WACC) at 7%. In many markets, stand-alone PV systems can achieve far lower cost of capital. WACC levels of 2.5% have been seen in Germany, the report noted.

"WACC is the most important input parameter in the calculation of PV LCOE. Increasing nominal WACC from 2 to 10% will double the LCOE," it said.

The cost of capital for solar plus storage projects should fall in the medium to long term, Vartiainen said.

"Both PV and battery storage systems [will] become better known as mainstream energy investments with their intrinsic low technical, environmental and economic risks," he said.

The cost of capital depends on factors such as investor experience in solar plus projects and the level of warranties put in place, Breyer said.

Growing pools of data from operational solar plus storage plants will boost investor confidence in the coming years. Investors can also draw from a growing pool of battery technology learnings in other sectors, such as the automotive industry, Breyer noted.

Supportive and stable market regulations are also needed to minimize risks for solar plus storage developers, Breyer said. The trend away from feed in tariffs towards competitive tenders will reduce the overall risk of policy changes, he noted.

“Continued risk reduction of the business models is key. Any artificially induced market risk has to be removed and avoided," he said.

The opex of batteries will also be a key cost reduction driver for solar plus storage projects.

Battery storage units degrade faster than PV plants and currently require replacement at least once during the 25-year lifespan of the PV asset. The rate of battery degradation depends on the technology and the charging and dispatch strategies.

In its report, EU PVSEC assumes the replacement of stationary battery systems after 15 years. This is based on 4,000 cycles or 5,000 80%-deep cycles and an average maximum usable capacity during the lifetime of 80% of nominal capacity.

"Considering that the storage is not fully used every day, 15 years is realistic, and it should increase in the future as battery technologies are improving," Vartiainen said. "For power applications, e.g grid frequency control, the lifetime could be less."

Advances in battery lifespans will be critical to reducing the opex of solar plus storage facilities and some technology developers are now working to extend lifetimes to 25 or 30 years, Breyer noted.

"This is the strong pressure from the market, so that PV and battery lifetimes are synchronized,” he said.