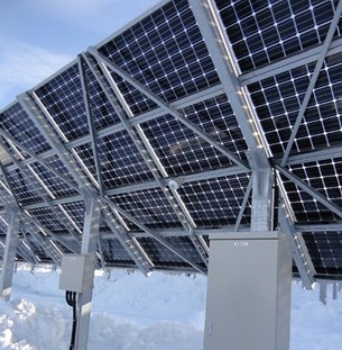 Demand for bifacial panels is soaring as developers seek to increase power yield amid mounting market competition. In a further boost, U.S. federal authorities have exempted bifacial panels from Section 201 import tariffs. Even before the exemption, returns for U.S. bifacial plants were estimated to be 2.5% to 7% higher than mono-facial designs, depending on the region, modelling by developer EDP Renewables shows.

Studies show that high reflection surroundings can be created to increase the power production of bifacial modules, Fatima Toor, assistant professor of electrical and computer engineering at the University of Iowa, told New Energy Update. The University of Iowa has performed joint research on this with the National Renewable Energy Laboratory (NREL) and Sandia National Laboratories.

Low cost white paint can be used to improve ground reflectance and snow coverage can have a major impact, Toor said.

“Snow generates high reflection surroundings, which is why bifacial PV is being explored in Nordic region, Alaska, northern Canada, and other regions with high snow coverage,” she said.

Bifacial developers must take into account a greater number of different solar irradiance metrics and modelling must improve while the industry builds up operational data. Greater confidence in actual power production levels and international standards will make it easier for developers to secure finance.

"We are in the process of assimilating field performance data so that we can compare the performance predictions of both models to that produced by actual bifacial PV systems,” he said.

White Ethylene Propylene Diene Monomer (EPDM) has by far the highest rate of reflectance, with asphalt yielding the worst results out of the five surfaces tested, joint research by NREL, University of Iowa and Sandia National Laboratories shows.

Effect of material on ground reflectance 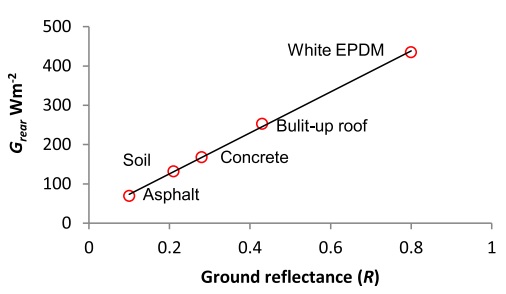 US research: 'Assessment of Bifacial Photovoltaic Module Power Rating Methodologies—Inside and Out,' March 2017.

System size has a large impact on ground reflectance for bifacial PV arrays and designs must be adjusted accordingly, according to a 2018 study by the University of Iowa and its research partners.

“The larger shadowing area on the ground (due to the larger number of modules) plays the most important role in the decrease in the performance of larger systems. Blocking of the diffuse sunlight by the surrounding modules is another reason that the large systems perform worse,” the study said.

For larger systems, seasonal optimal tilt angles can be as much of 20 degrees greater than for smaller systems, the research showed.

“This is due to row-to-row shading, back row module reflection, and horizon blocking effects in large multi-row systems relative to a single panel system," Toor told New Energy Update.

Modelling practices will need to evolve to improve the accuracy of performance predictions and monitoring, Suez told the conference in April.

Diffuse shading from trackers can also significantly impact performance and ground-reflected spectrums are very different from sky spectrums, he said.

As part of its research, NREL is developing the first ever database of albedo values for different regions and different types of ground surface.

The data collected will include the types of vegetation and soil, monthly and annual means and diurnal profiles.

NREL wants operators to share data and the database will also include data from surface radiation, CO2, water, and energy flux networks.

EDPR is building a new pilot bifacial project this year on which it will test factors such as the impact of vegetation height on performance.

Current industry-standard models do not include many of the metrics specific to bifacial plants and may be underestimating performance, Suez said.

"They will tend to be a little bit more conservative than reality... That's why we have to build test systems," he said.