Design innovations and a favorable development framework should see Morocco hit its lowest prices for the hybrid PV-CSP Noor Midelt project and the country is joining global support schemes to diversify its funding supply, an official at the Moroccan Agency for Sustainable Energy (Masen), said. 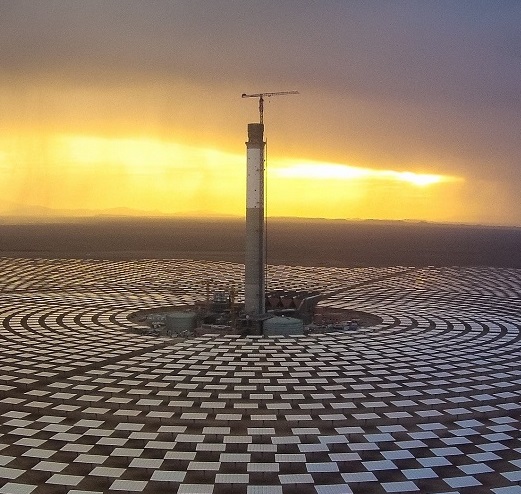 Managed by Masen, the renewable program supported the construction of the 160 MW Noor I parabolic trough plant with three hours storage, operational since 2015. The 200 MW Noor II parabolic trough plant and 150 MW Noor III CSP tower plant, both with over seven hours storage, will also come online by the end of this year, in addition to the 170 MW Noor PVI project. Noor I, II and III and PV1 have all been developed by Saudi Arabia's ACWA Power and partners.

Morocco has kept in place a "plug and play" approach to plant procurement used for earlier CSP tenders where many development and financial risks are assumed by Masen.

This framework allows developers to focus on optimizing project costs and should result in a lower tariff for Noor Midelt than on previous projects, Meryem Lakhssassi, Sustainable Development Officer, Masen, told the MENA New Energy 2018 conference in Dubai on April 24. Morocco’s CSP tariff prices have already dropped sharply, from 1.62 Dirhams per kWh ($189/MWh) for the Noor I project to 1.36 Dirhams/kWh ($140/MWh) for Noor II, Lakhssassi noted.

Global auction results suggest that CSP could provide electricity at prices between $60/MWh and $100/MWh by 2020, the International Renewable Energy Agency (IRENA) said in a recent report. In September 2017, Dubai awarded ACWA Power the 700 MW DEWA CSP project at a tariff price of $73/MWh, under a 35-year power purchase agreement (PPA). China’s Shanghai Electric will deliver the plant in the group’s first major CSP contract outside of China.

Morocco's support for CSP with storage comes from a combination of renewable energy priorities and a direct market need for night time power.

"The main objective of the Moroccan energy strategy is to reach 52% of installed capacity from renewables...Given the fact that the peak hour in Morocco is after sunset, the energy storage was inevitable," Lakhssassi said.

The dispatch capabilities of CSP with storage meets the nation’s requirements for load matching, construction lead times, and grid reliability. The operation of the Noor I plant led to a "drastic improvement" on the quality of electricity supply in the local region, Abdelkader Himdi, Director of Operations and Maintenance at MASEN, told the CSP Seville 2017 conference in November.

The Noor Midelt project is to be developed through an independent power producer (IPP) scheme in which the successful consortium designs, finances, builds and operates the plants and sells the electricity to Masen under a 25-year PPA.

Under Morocco’s procurement framework, Masen assumes a range of responsibilities to reduce the risks for developers.

This process allows the bidders to "focus on proposing the best tariff per kilowatt-hour and the best technical configuration," Lakhssassi said.

"All these elements are in favour of efficiency, in terms of timing and transaction," she said.

Other CSP tenders planned in Middle East in 2018

The Noor plants have benefited from multilateral finance which have produced competitive terms on pricing and tenor. According to ACWA Power, concessional financing reduced the levelized cost of energy for the Noor I project by around a quarter, for example.

For Noor I, II and III, Masen obtained long-term funds at a low price from international financial institutions including the World Bank’s Clean Technology Fund (CTF). Concessionary loans are being provided by the World Bank, German development bank KfW, African Development Bank (AfDB), European Investment Bank, French development agency AfDB, and these are on-lent by Masen to the developers.

The financial contracts in place for the Noor projects are lender-friendly and more demanding for the sponsors, Thierry Tardy, executive director for acquisitions and project finance at ACWA Power, told New Energy Update in 2016.

The financing terms include a demanding package of representations, warranties and covenants, he said.

The AfDB and the World Bank have already agreed to support Noor Midelt and the programme will receive a $25 million loan from the Climate Investment Funds’ Clean Technology Fund (CIF CTF).

In addition, Masen is continuing to "diversify its financing sources," Lakhssassi told the conference in Dubai.

The Moroccan authorities are currently progressing through the accreditation process for the Green Climate Fund (GDF) while other potential sources include participation in the global Clean Development Mechanism or Gold Standard, she said.

The Midelt developers also benefit from a range of site characteristics that will help lower the tariff price.

Direct Normal Irradiance (DNI) at the site is approximately 2,360 kWh per square-meter per year and the site consists of a large flat land area of approximately 4,000 hectares. In addition, the plants will gain grid connections and access to water supply from a dam located around 15 km from the site.

The Moroccan authorities launched the request for proposals (RfP) phase for the Noor Midelt project in July 2017 and developers will soon move forward to final bids and financial terms. Following an initial technical offer, all the shortlisted bidders enter into a Q&A session with Masen after which initial technical bids can be amended before financial offers are submitted.

"We are expecting to sign and close the project by the end of the year, or early 2019," Lakhssassi said.