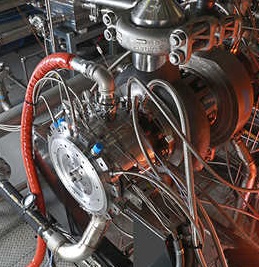 The U.S. Department of Energy (DOE) is to provide up to $44 million to CSP-related R&D projects in its latest $125.5 million funding round for solar technologies, the DOE said February 5.

The department is to provide a total of $39 million to one or two projects that build and demonstrate supercritical carbon dioxide (sCO2) Brayton cycle technology, it said. The systems must achieve thermal energy storage at temperatures of between 550° C and 630° C.

"The goal of this topic is to accelerate the commercialization of the sCO2 Brayton cycle and provide operational experience for utilities, operators, and concentrating solar-thermal power (CSP) developers," DOE said.

The 10 MW turbine yielded a thermal efficiency of almost 50%, far higher than the 35 to 40% achieved by conventional CSP systems.

Among the DOE's other funding pledges, some $5 million will be allocated to between 15 and 20 small innovative projects for CSP and PV technologies. The projects would be required to produce significant results within the first year.

"These projects are riskier than research ideas based on established technologies and will typically receive smaller funding amounts than projects in other topic areas," DOE said.

"If successful, the outcomes will open up new avenues for continued study," it said.

In its previous funding round in November, the DOE provided $30 million to 13 CSP research projects. These projects would cover areas such as new materials, systems and manufacturing solutions and automated CSP collector fields, and would help the U.S. achieve its CSP cost reduction targets, it said. The DOE aims to reduce the cost of CSP with 12 hours of thermal energy storage to $50/MWh by 2030.

“We are pleased to be adding another CSP project to our portfolio, building on the excellent experience we have had with the Andasol assets and team that joined Cubico in 2017," David Swindin, Head of EMEA at Cubico, said in a statement.

"We believe that the technology offers some big advantages in helping the network cope with the challenges of intermittent renewable power and we look forward to adding further assets to the portfolio in the future," he said.

Spain's CSP fleet has now enjoyed a decade of proven performance and financial investors have recently acquired a number of plants.

The project will be located at NEOM, a futuristic city being built in the desert in north-west Saudi Arabia.

The seawater is pumped into a hydrological dome made from glass and steel, before it is heated, evaporated and eventually precipitated as fresh water.

Construction of the dome will start in February and the project is expected to be completed by the end of the year.