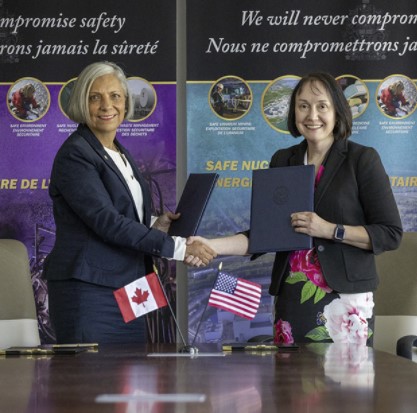 U.S. and Canadian regulators have issued a joint report on the manufacturing codes they propose to use in X-Energy’s Xe-100 reactor pressure vessel (RPV) construction code assessment, the first collaborative project between the Nuclear Regulatory Commission (NRC) and the Canadian Nuclear Safety Commission (CNSC) on small modular reactors (SMRs).

It will be the first collaboration of its kind since the NRC and CNSC signed a memorandum of cooperation in August 2019 over licensing SMRs when they agreed to increase regulatory effectiveness though inter-agency coordination, building on a joint memorandum of understanding signed two years earlier.

The MoC means the two regulators will share scientific information to support reviews of SMRs and advanced reactor technology.

“The MOC enhances cooperation in areas of common interest, including aspects of reactor design, research, staff training, and the comparing of regulatory practices,” the CNSC said.

X-Energy submitted a white paper proposing to design and analyze the Xe-100 RPV to the requirements in the American Society of Mechanical Engineers Boiler and Pressure Vessel Code, Section III, “Rules for the Construction of Nuclear Facility Components,” Division 5, “High Temperature Reactors”. However, it would fabricate the vessel according to alternative rules.

“The CNSC and the USNRC have reviewed the white paper and concluded that X-Energy’s proposed approach for the design and fabrication of the Xe-100 RPV is viable, provided X-Energy includes the additional technical justification requested in this report and addresses both regulators’ observations documented in this report,” the NRC and CNSC said in a joint report.

The start of regular electricity production at the Olkiluoto 3 (OL3) EPR has been delayed a further three months due to the extension of maintenance and inspection measures, the Finnish utility Teollisuuden Voima Oyj (TVO) said in a statement.

The AREVA-Siemens consortium plant supplier decided to expand the maintenance so that all three low-pressure turbines are inspected based on the inspection measures implemented with the turbine, TVO said.

The OL3 EPR plant supplier consortium, which includes AREVA GmbH, AREVA NP SAS and Siemens AG, will build the plant unit through a fixed price turnkey contract. They are jointly liable for the obligations under the plant supply contract until the end of the plant unit’s warranty period, TVO said.

Regular electricity production was postponed until March 2022 in July after the company decided to conduct additional overhaul and inspection work for the turbine following test results from the hot functional test phase.

NuScale Power and Xcel Energy have signed a Memorandum of Understanding (MoU) to explore the feasibility of the utility provider to serve as a plant operator at NuScale plants, the SMR developer said in a statement.

Under the MoU, the two companies will study the possibility of Xcel Energy becoming NuScale’s preferred partner to provide a variety of operational power plant services to NuScale customers based on Xcel Energy’s nuclear operational management systems, it said.

The MoU is not a formal operating agreement but creates a framework for negotiating definitive agreements for the two groups to work together, the statement said.

“This agreement underscores NuScale’s ability to provide our customers not just with technology but also with the world-class operational support needed to ensure that countries, governments, utilities, and customers can provide the clean energy solution our communities need to thrive,” said NuScale Chairman and Chief Executive Officer John Hopkins.

NuScale, the first and only small modular reactor (SMR) developer to receive approval from the U.S. Nuclear Regulatory Commission (NRC), aims to commercialize its SMR technology before the end of the decade.

BWX Technologies has signed a contract worth around CAN$40 million ($31.7) with Bruce Power to supply four moderator heat exchangers, the company said in a statement.

Subsidiary BWXT Canada will provide engineering and fabrication services for the specialized components which remove heat from the moderator system of CANDU nuclear reactors, BWXT said.

“The components are designed for reliable, long-term operation to help Bruce Power continue to provide Ontario with non-emitting, stable and cost-effective electricity for many years to come,” said President of BWXT’s Nuclear Power Group John MacQuarrie.