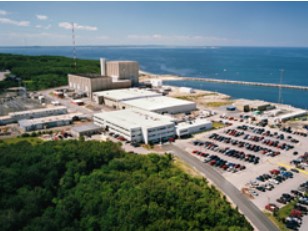 Holtec International and the Commonwealth of Massachusetts have reached an agreement on the decommissioning of the Pilgrim nuclear power plant, Holtec said in a statement on June 17.

In exchange for decommissioning trust fund protection, stricter radiological clean up limits, additional site monitoring and oversight on the part of Holtec, the Commonwealth has agreed to remove pending contentions and legal actions in opposition to the licence transfer, the company said.

Holtec acquired the 680 MW boiling water reactor Pilgrim Nuclear Power Station, the only nuclear power plant operating in Massachusetts, from Entergy in August, 2019 after it was shut down the previous May.

Holtec claims that initiatives being deployed by the company at Pilgrim will minimize the radiation dose emitted from the on-site fuel storage facility by using a densified cask array and regionalized cask arrangement to maximise self-shielding.

“In its drive to remove all nuclear fuel and high-level waste material from the Pilgrim site, Holtec is diligently working on establishing a state-of-the-art consolidated interim storage facility in south eastern New Mexico. Known as HI-STORE CISF, the facility would provide a supremely safe, secure, retrievable, and centralized facility for storing spent nuclear fuel from Pilgrim,” Holtec said.

HI-STORE CISF is an interim storage facility and Holtec said it expects the USNRC to issue a licence for the technology in the Spring of 2021.

GFP will act on behalf of the joint venture to oversee the project and provide project development, licensing, construction, and operation of the commercial demonstration reactor which will serve as a model for potential future MMR projects across Canada, they said.

“The backing of OPG combined with USNC’s advanced reactor and fuel designs will allow us to continue to lead the way in delivering a small-reactor solution in Canada,” explained Joe Howieson, CEO, Global First Power Ltd. “This joint venture is a very important milestone, marking new levels of commitment by an innovator in nuclear power-generation technologies and a forward-thinking, major utility.”

The USNC MMR consists of two plants including the nuclear plant that generates heat and the adjacent power plant that converts heat into electricity or provides process heat for industrial applications, they said.

Russia’s ROSATOM has signed a Memorandum of Understanding (MOU) with France’s Framatome and GE Steam to jointly work to participate in the tender for the construction of Belene nuclear power plant in Bulgaria, the company said in a statement on June 18.

Under the accord, if ROSATOM becomes a strategic investor, General Electric will be considered as the partner of Arabelle-based turbine-generator set and Turbine Hall Equipment and Framatome the key partner of Instrumentation and Control systems for the Bulgarian plant, it said.

“I am sure that international cooperation between nuclear industry leaders will help create the best financial and technical conditions for the implementation of the Belene NPP."

ROSATOM, Framatome and General Electric had been shortlisted for the Belene plan alongside China National Nuclear Corporation (CNNC) and the Korea Hydro & Nuclear Power Corporation (KHNP).

The United Nations Industrial Development Organization (UNIDO) and International Atomic Energy Agency (IAEA) have signed an agreement to renew cooperation no the peaceful uses of nuclear technology for inclusive and sustainable industrial development, the UN said in a statement June 12.

Formally named Practical Arrangements, the agreement provides a framework for the UNIDO and IAEA to support common member states in the use of nuclear energy for food and agriculture, water and environment, industrial applications, trade-related capacity-building, and mitigating the impacts of climate change, amongst other areas, they said.

“We have a lot of potential to combine our expertise, resources and networks to support our common Member States,” said the Director General of the United Nations Industrial Development Organization (UNIDO), LI Yong. “This further strengthens the partnership between our two entities as we seek to deliver on our commitments towards the 2030 Agenda.”

UNIDO and IAEA will attempt to build awareness of nuclear technologies, share data and methodologies through publications, tools and databases and trainings and events as part of the agreement.