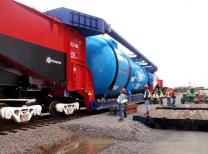 The first of two steam generators for unit 2 arrived at SCE&G’s V.C. Summer AP1000 construction site Jan.4, 2015. The component was sent from the Port of Charleston by rail on the specially designed Schnabel car. The steam generator weighs 1,373,480 pound

SCANA Corporation has filed a petition with the Public Service Commission of South Carolina (SCPSC) seeking approval to update the construction milestone schedule as well as the capital cost schedule for V.C. Summer Nuclear Station Units 2 and 3 being constructed in Jenkinsville, South Carolina.

Although negotiations continue with Westinghouse Electric Company and Chicago Bridge & Iron (Consortium), this updated filing was necessary at this time as several project milestone dates previously approved by the SCPSC have now exceeded their allowable contingency time periods, said SCANA.

In making this filing, SCE&G does not waive any claims related to delay and other related contested costs with the Consortium.

“These estimated completion dates are based upon information received from the Consortium. This petition includes incremental capital costs that total $698m (SCE&G's portion in 2007 dollars), of which $539m are associated with these delays and other contested costs.

As noted in the petition, the construction and capital cost schedules are subject to continuing review and negotiations by the parties.

According to FENOC, while the unit is off line, 280 of the 748 fuel assemblies will be replaced, and numerous safety inspections will be conducted on the unit's reactor vessel, turbine and electrical generator.

During the outage, Perry will also install a new, large transformer, which is one of two circuits that provide power from the off-site transmission network to the plant's on-site electrical systems.

The new transformer is approximately 20 ft. tall and weighs 115 tons. Installation of the new equipment is expected to enhance reliability and ensure a critical power source is available for plant operation.

More than 1,000 temporary contractors and FENOC employees from the company's other nuclear plants will supplement the Perry workforce during the outage.

Belcher replaces Peter P. Sena, who has left the company to pursue other opportunities.

Safety refurb of Oskarshamn set to complete by year’s end

The safety modernization of unit 2 of Sweden's Oskarshamn nuclear power plant is expected to be completed by the end of 2015, according to plant operator OKG. The project started in June 2013.

In March 2014, OKG announced it had decided to postpone the uprate work to allow it to focus on the ongoing safety work. The company then said last June it intends to implement the power increase during 2017, two years later than originally planned, according to a World Nuclear News report.

OKG experienced delays in completing the project due to "greater precision in the estimate of the time required for the remaining works and additional analytical works."

According to an alert by Federal Register, The US Nuclear Regulatory Commission (NRC) is preparing a supplement report to the Department of Energy's environmental impact statement (EIS) on the proposed geologic repository for spent nuclear fuel and high-level radioactive waste at Yucca Mountain in Nevada.

The NRC believes that the EIS the Department of Energy (DOE) submitted in 2008 was not adequately addressing all of the repository-related effects on groundwater, or from surface discharges of groundwater.

In 2013, it asked DOE to prepare a supplement. Instead, DOE updated its analysis of potential groundwater impacts after closure of a repository at the site, and in February 2015 the NRC directed its staff to prepare the supplement.

They will use the DOE analysis in preparing the supplement, said WNN.

The supplement will describe a key aquifer at the site and look at the potential for contaminants to reach it. It will analyze the degree of potential contamination and how water and contaminants could move. And it will discuss how soil, surface materials and the surrounding environment might be impacted by contaminated groundwater.

The NRC expects to issue a draft supplement for public comment in late summer. During the comment period, the NRC plans to hold three public meetings – two in Nevada and one at its headquarters in Rockville, Maryland – and a public webcast and teleconference.

NuScale Power has entered into an agreement with AREVA for the performance of fuel design, testing and analysis services in support of NuScale’s Design Certification Application using AREVA’s proven HTPTM fuel technology.

China has approved the construction of two new nuclear reactors, giving a long-awaited go-ahead to Chinese nuclear developers, according to news reports.

In a statement released through the Hong Kong stock exchange, China General Nuclear Power Group stated that the two newly approved reactors will be at the Hongyanhe nuclear power plant.

Unit 2 of China General Nuclear's (CGN's) Yangjiang nuclear power plant in Guangdong province was connected to the grid on 10 March. The company said the reactor will enter commercial operation once it has successfully completed a test run lasting 168 hours.

The first unit began commercial operation in March last year, with unit 2 expected to start up in mid-2015. Construction of two further units at Yangjiang - both ACPR1000 reactors - began in 2013. All six units are scheduled to be in operation by 2019, it was reported.