Cape Town asks business to help pull it back from brink

The South African city has turned to the private sector for help with critical problems such as water shortages and congestion. Claire Manuel reports

Climate change is a reality for African cities, with sea-level rises and increased drought forcing municipalities to look for outside help to adapt. “Many African cities are exposed to sea-level rise and coastal surges because they lie in low river deltas and along the coast,” says Kate Owen, urban development manager at the World Resources Institute. “At the same time, most lack adequate drainage, sewage treatment, waste-collection and land-use planning that protects critical ecosystems. That makes these communities highly susceptible to the coming changes in climate, but also creates lock-in effects that are difficult to overcome.”

Cape Town is one of the fastest-growing cities in South Africa, with a population of 3.9 million. Most of its people are very poor and the city suffers high unemployment rates. Climate change presents a very real danger and the region is suffering an unprecedented drought. The city has been driving a water-demand management plan for a number of years, which has resulted in significant water savings, yet Cape Town is on the brink of a water catastrophe.

“We are in a real crisis,” Cape Town Mayor Patricia de Lille told Bloomberg at the C40’s Women4Climate conference in New York in March. She explained that the city gets little support from the national government. “We have less than 120 days of usable water left in our dams. It calls for a concerted effort by everyone.” 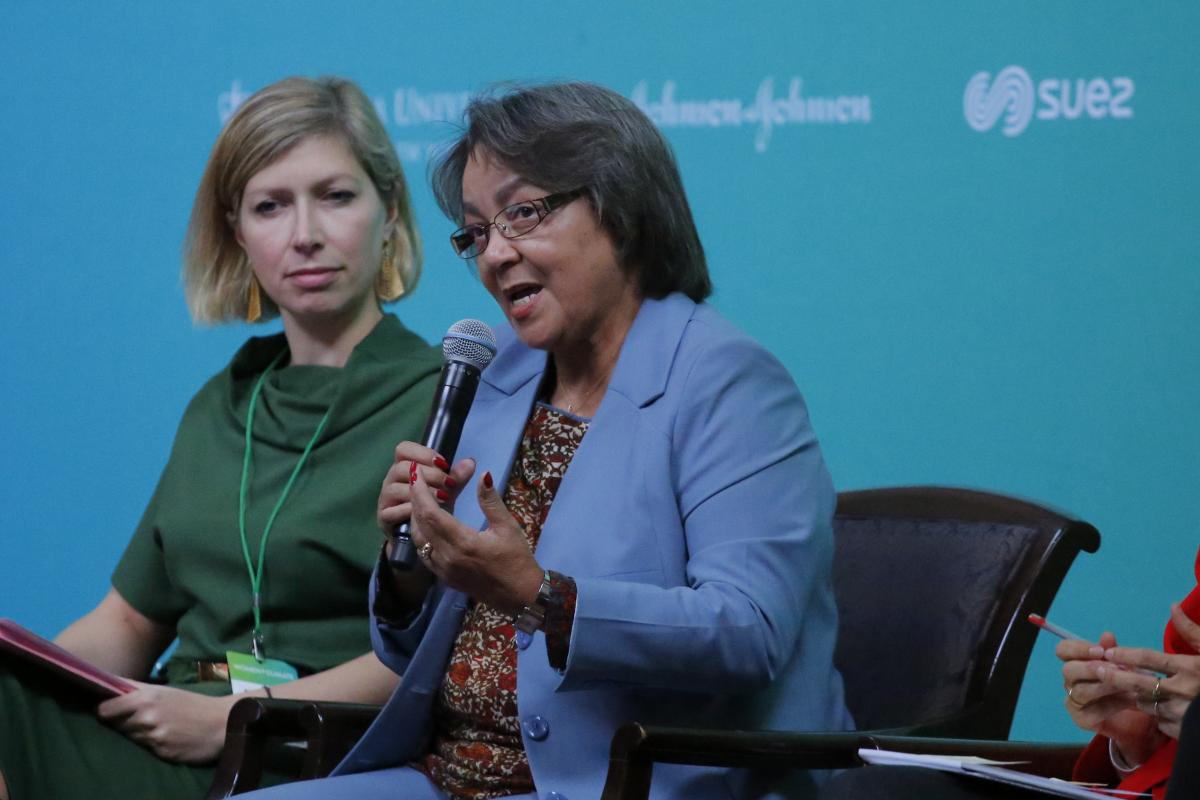 The city is partnering with the private sector to deliver climate action and raise finance. To tackle the drought, the city has been working with businesses to encourage them to monitor and reduce their water use. Local hotel groups, for example, have been encouraging guests and staff to conserve water.

“In measuring the impact of these initiatives, the Cullinan hotel reported that while their year-on-year occupancy for a three-month period increased by 8.8%, their water consumption for the same period has reduced by 3%,” said De Lille in a recent briefing to local businesses.

Cape Town’s progress towards sustainability is based on a participatory approach, bringing together local businesses, residents and NGOs to address the many challenges the growing city faces. The city is involved in numerous collaborations and forums with the private sector to mainstream sustainability and climate change action within its operations.

Accelerate Cape Town is a business leadership organisation representing top-tier corporate business in the city region. Sustainability is one of its focus areas: building a resilient and low-carbon economy, including leveraging the Cape’s natural resources. The transport sector is the largest consumer of energy, accounting for 64% of energy use, and research suggests that Cape Town is the most congested city in South Africa. In March Accelerate Cape Town, together with members from investment management company Allan Gray, British American Tobacco, Deloitte, Nedbank, PwC, law firm Webber Wentzel and Woolworths Holdings, launched a carpooling pilot scheme and ride-sharing app called uGoMyWay. The scheme aims to stimulate corporate carpooling as a mechanism to ease traffic congestion into and out of the central business district, to help keep the city moving and growing sustainably.

The Cape Town Climate Change Coalition was launched in 2011 as part of the Climate Smart Cape Town campaign. The coalition represents an alliance of organisations and partners to work towards positioning Cape Town as a leading environmentally sustainable city, committed to practices that enable the city to adapt to and mitigate the effects of climate change. Another organisation, the Energy Efficiency Forum for Commercial Buildings, in partnership with South African public utility Eskom, the South African Property Owners’ Association (SAPOA), and corporate partner Old Mutual, promotes energy efficiency in the commercial sector. 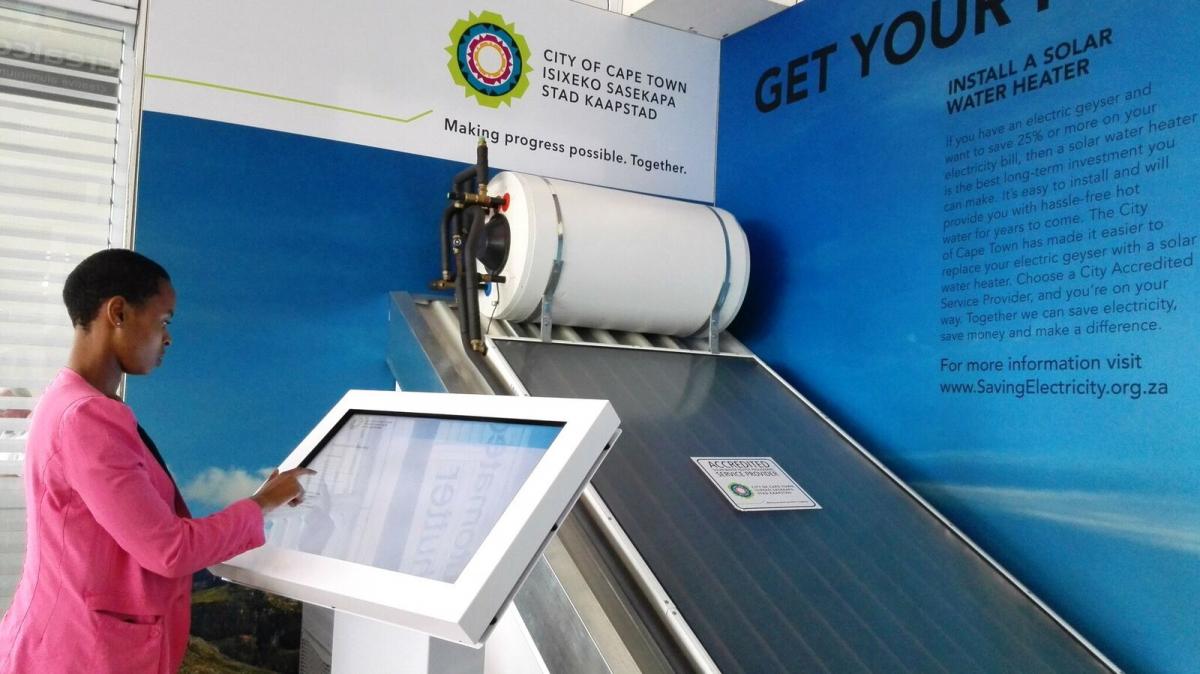 More than 60,000 solar water heaters have been installed in homes (credit: CCT Energy)

Non-profit organisation GreenCape was established in 2010 as a special purpose vehicle to unlock the manufacturing and employment potential in the green economy. Cape Town is collaborating with the GreenCape to establish the industrial area of Atlantis as a green manufacturing hub. An incentives scheme was established in an effort to attract investment and development to Atlantis, which is characterised by high poverty and unemployment levels.

Biodiversity offsets for development are provided and, to help support local manufacture and assembly of solar equipment, the city is working with local energy service providers to install more than 60,000 solar water heaters onto household roofs. A number of companies have already made significant investments into the hub, totalling more than R680m (£39m), and an application has been submitted by the Western Cape Provincial Government for the entire Atlantis industrial area to be declared a special greentech economic zone.

In 2015, the city developed its Energy 2040 goal, with targets to achieve 37% reduction in carbon emissions by 2040, and 13% by 2020. Central to this will be the ability to source 10-20% of Cape Town’s energy from renewable sources, a task that has been entrusted to the new directorate of energy.

For most – if not all – cities, sustainable project financing will increasingly have to come from the private sector. “For this to happen, cities need to put forth a long-term vision of better development, similar to what Cape Town has achieved,” says WRI’s Owens. “Cities need to make clear commitments and build trust with the private sector that they will not deviate from this more sustainable path.”

This article is part of a briefing on cities and climate. See also:

‘Mayors need to lead and they have to move fast’