Can we defuse the ‘climate time bomb’ of soaring demand for cooling?

With greenhouse gas emitting HFCs amplifying the climate impact of increased demand for air conditioning, Diana Rojas reports on how a network headed up by UN Environment is working to make access to low-carbon cooling a priority for global action

With 2019 a year of superlatives in climate – the hottest months ever, the most intense heatwave ever in Europe, the hottest and driest year ever in Australia – the need to expand global access to efficient and climate-friendly cooling has risen up the agenda ahead of the crucial COP26 climate conference in Glasgow.

New on the scene is the Cool Coalition, a global network launched last April by UN Environment, the Climate & Clean Air Coalition, the Kigali Cooling Efficiency Program (K-CEP), and Sustainable Energy for All (SEforALL), that aims to expand global access to efficient and climate-friendly cooling, while also reducing greenhouse gas emissions from air conditioning and refrigerants.

Some 80 partners from all sectors have pledged more funding, from developing national cooling plans, to cutting emissions in cooling products and diminishing the need for cooling in cities.

People don’t know how much energy is used to keep a fish cold before they finally put it on their plate. It is our job to raise awareness

“Part of the problem is awareness. Many people don’t know how damaging the simple cooling feeling of an air conditioner can be,” said Dan Hamza-Goodacre, executive director of K-CEP, a philanthropic initiative of 17 foundations and individuals that have pledged $51m to boost energy-efficient cooling in developing countries. “Most people don’t know how much energy is used to keep a fish cold before they finally put it on their plate at home. It is the job of the Cool Coalition, to raise this awareness and make the invisible more visible.”

The Montreal Protocol, which came into force in 1989, was an international treaty that phased out hydrochlorofluorocarbons (HCFCs), which are responsible for ozone depletion. But while replacement with hydrofluorocarbons (HFCs) helped heal the ozone layer, HFCs have a global-warming potential thousands of times that of carbon dioxide.

Two decades later, in January 2019, the Kigali Amendment came into force committing countries to an 80% reduction in HFC production by 2047. 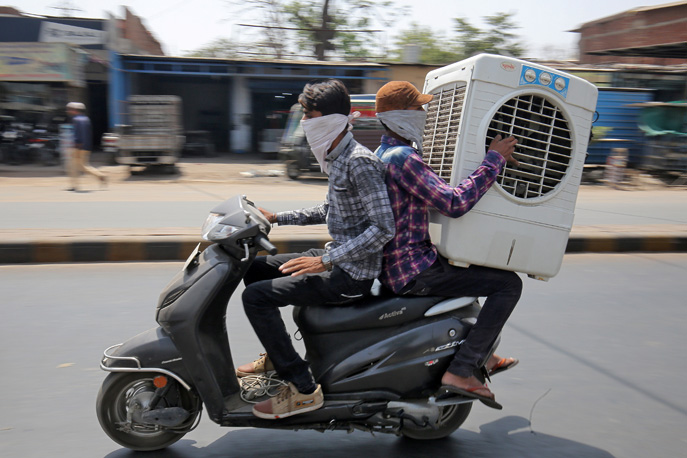 Several countries pledged to integrate cooling in their nationally determined contributions (NDCs) – climate mitigation plans required by the Paris Agreement. At the G7 meeting in France last autumn, some 26 more countries, led by France, signed onto the Biarritz Pledge for Fast Action on Efficient Cooling, committing to adopt comprehensive national cooling plans, improve the energy efficiency of air conditioners, and phase out HFCs. They also pledged to mobilise finance for these activities.

According to the International Energy Agency, addressing HFCs alone can deliver 0.4C of avoided warming, and coupling the HFC phase-down effort with improvements in energy efficiency could double the climate benefits, while saving some $2.9tn globally by 2050 through lower power usage.

Until now, the climate impact of heating has garnered more attention than cooling as the industrialised countries in the global north are the bigger emitters. But in the global south – where temperatures are getting hotter, the population growing and moving to urban heat islands, and more people are able to afford room air conditioning – emissions from cooling are “a ticking time bomb that we can see on the horizon,” said Hamza-Goodacre.

The number of air conditioners in use is expected to rise from 1.2 billion today to 4.5 billion by 2050

Soaring demand for cooling globally is leading to a dangerous loop: energy use from cooling and refrigeration is expected to rise 90% by 2050 (from 2017 levels), which would result in additional greenhouse gas (GHG) emissions equivalent to a third of all current emissions, according to a 2018 University of Birmingham study.

In addition to the G7 signatories to the Biarritz Pledge, various multilateral development banks have pledged to increase funding for cooling, with the World Bank Group and the Green Climate Fund integrating clean and efficient cooling across their lending/investment portfolios, and the Children’s Investment Fund Foundation (CIFF) pledging an additional $20 million to K-CEP. 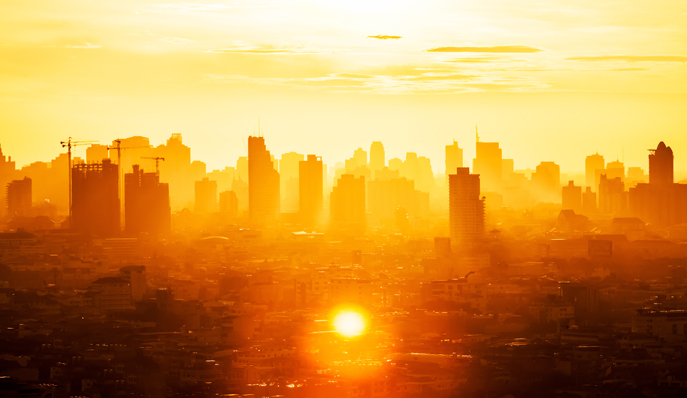 Southern cities like Bangkok are getting hotter with a growing population. (Credit: TW Stock/Shutterstock)

The donation from the CIFF brings K-CEP's funding to more than $60m, and in January the group launched its $12m NDC support facility, which will provide funding and guidance to organisations to support governments that want to integrate cooling solutions into their second-round NDCs later this year at the COP26 in Glasgow, which has been postponed to some time next year due to Covid-19. K-CEP, founded in 2017, is a philanthropic programme to help increase the energy efficiency of cooling in developing countries in central/south America, Africa, the Middle East and Asia (minus Iran), and an aim to replace HFCs with newer, climate-safe coolants.

Last autumn, the UN Environment Programme unveiled new, voluntary guidance standards for more eco-friendly air conditioning and refrigeration appliances, with lower global-warming potential. The aim is to assist governments in developing/emerging economies to set energy labels and minimum performance standards, and to bolster those in many countries where they are outdated or unenforced. In the absence of standards and enforcement, the report says, countries are vulnerable to becoming “dumping grounds for products that cannot be sold elsewhere”.

Hamza-Goodacre said K-CEP is supporting regional harmonisation of standards that would help countries work together and send stronger signals to exporting/manufacturing countries.

According to a study by the Rocky Mountain Institute (RMI), one of the prize’s sponsors, technology available today could support residential air conditioning solutions that have a five times lower climate impact and are four to five times more energy efficient, but the “market is not moving fast enough on its own”.

The eight finalists have been awarded $200,000 each to develop and ship their prototypes to India for testing this summer, with the winner, who will receive $1m in prize money, to be announced in November 2020.

One barrier to uptake of more climate-friendly air conditioners is that until they are mass-produced they will be more expensive to buy than standard air conditioning, although they will be lower cost to run. Iain Campbell, senior fellow at RMI, said innovation in financing and policy would also be necessary to bring down the upfront costs.

“The prize process was structured to shine light on this very specific space and identify what could be possible and then test the solutions to demonstrate what is possible,” he said. “The results from the testing stage will inform market stakeholders, especially legislators and policymakers, as to what levels of efficiency can be achieved within appropriate cost constraints and how some of the future low global warming potential (GWP) refrigerants and refrigerant alternatives actually perform.”

Paris, for example, has pledged to expand its district cooling system, the most extensive in the world, from mostly hospitals, hotels, museums and department stores to also include small companies and residential buildings, with the aim of covering 100% of the city in 20 years (from 43% today). District cooling is a closed system that uses chilled water (from the Seine, in Paris’s case) to cool all connected buildings. France's, Engie, the utility that runs the Paris network, pledged to invest some €2bn by 2024 in district cooling systems worldwide.

Besides focusing on less polluting or carbon-intensive ways to crank up the air conditioning, the Cool Coalition is encouraging passive cooling ideas, especially in cities where concrete, asphalt and a lack of vegetation can exacerbate the heat. C40 joined the Cool Coalition as a knowledge partner, committing that its more than 90 member cities would share expertise on how to integrate urban cooling into their climate action plans and building design, including adding more green public spaces on undeveloped land, green roofs and walls.

In Medellín, Colombia, winner of an Ashden sustainable energy award last year, verges along roads and waterways have been turned into green corridors, providing shade for cyclists and pedestrians and improving air quality along busy roads. The city’s botanical gardens train people from disadvantaged backgrounds to become gardeners and planting technicians, and they’ve been put to work transforming abandoned land that had become dumps and isolated anti-social areas into lush gardens. As a result, temperatures have fallen by two or three degrees Celsius in many places, with more significant reductions expected in the future.

Athens has been lowering cooling needs of public buildings by up to 60% since it began planting green roofs on them in the early 2000s, and in 2016, San Francisco became the first American city to make green roofs compulsory on some buildings.

In other cities, white is the new green: Since 2009, New York City has coated more than 9 million square feet of tar roofs (and counting) with white paint through its Cool Roofs programme, and Los Angeles is applying light grey paint to its streets. This is because light colour surfaces reflect, rather than absorb, the heat of the sun, lessening the need for mechanical cooling inside.

A 2014 study by Arizona State University found that cool roofs could reduce temperatures by up to 1.5 degrees C in California, or 1.8 degrees in Washington, DC, with white roofs being even more effective than “green” roofs for cooling.

Regina Vetter, C40 Cool Cities network manager, said there are a range of tools available for cities to exchange their knowledge, best practice and challenges in adapting to heat and lower urban temperatures.

“Cities can individually and as a collective make a great difference in reducing the impacts of climate change in their communities.”

Diana Rojas is a freelance writer based in Washington, DC, and a regular contributor to the Ethical Corporation, focusing on environmental policy and sustainability issues. Diana is fluent in Spanish and Portuguese.

This article is part of our in-depth Climate-resilient cities briefing. See also:

From urban farming to green homes: the US cities building climate resilience

UK cities ramp up action to boost resilience, with double of number on CDP climate A list

Society Watch: Indigenous peoples fear being overshadow...
Comment: Five ways the world can break the deadlock on ...
Brands need to put money where their mouths are in figh...
Comment: How the UK can deliver on its promise of becom...
comments powered by Disqus