Two decades after the first Rio conference and in the months following the adjournment of Rio+20, the answer to this most fundamental question remains elusive.

Basically, it depends on the respondent. If you ask a mainstream investor, the answer may be: “Excelling in energy and water efficiency such that bottom line cost savings are achieved.”

If you ask a social investor, the answer may be: “Creating shared value in the form of competitive financial returns while continuously reducing one’s carbon footprint and respecting human rights.”

If you ask an NGO, the answer may be: “Paying living wages and contributing to poverty alleviation in the communities in which one operates.”

Same question, multiple answers – and all correct, to a degree. The problem, of course, is that in the absence of a broad-based consensus on the meaning and measurement of sustainability excellence, ratings organisations, whose business it is to evaluate the extent to which a company meets these undefined standards, are left with multiple choices of how to interpret what, exactly, they are rating, and how to do so.

Since the mid-1990s, the proliferation of ratings has produced mixed results. On the one hand, the field has advanced in terms of methodological innovation, and has provided a growing (mostly proprietary) body of intellectual capital developed, by and large, by commercial firms.

Presently, scores of raters – over 100 according to a study by the consultancy SustainAbility – administer hundreds of questionnaires to thousands of companies worldwide. A single large company may receive 20 or more questionnaires annually; all seeking information tailored to the needs of their specific ratings frameworks.

On the other hand, this proliferation has also led to pervasive inconsistency and divergence in ratings outcomes. Not surprisingly, the rankings for a single company in a specific year may range from a score indicative of sustainability leadership to sustainability laggard.

Further, as the table below indicates, the rating for the same company may swing widely year to year according to the same rater and, in the same vein, may be pegged as a leader one year and a laggard the next.

The burden placed on companies of responding to the plethora of questionnaires and the contradictory results that flow from such disparate approaches lead to widespread frustration among asset owners, asset managers, NGOs and, no less, among companies themselves.

Further complicating this landscape are the dual roles of some organisations as both raters and consultants to the same company, raising, at the very least, the perception of bias in outcomes.

As SustainAbility observes: “Sound governance and transparency underpin strong and credible sustainability ratings. Users and rated companies are more likely to pay attention to ratings when they understand how ratings work, [the] conflicts that may exist and how they are managed, how ratings change over time and how external stakeholders are involved.”

It is these circumstances that spurred the launch of the Global Initiative for Sustainability Ratings in June 2011. GISR’s mission is to create a global standard for corporate sustainability ratings that attains the highest levels of rigour, transparency and credibility.

The initiative is a newcomer to the larger, global corporate accountability movement that began some two decades ago with the launch of the Ceres coalition and kindred organisations, and has steadily expanded into a multitude of initiatives comprising norms, tools, and advocacy activities. In the same spirit as the Global Reporting Initiative during the last decade, GISR today is poised to make an equally significant contribution to the global corporate accountability movement.

GISR is a part of a value chain of initiatives, each of which fall into one or more categories: disclosers (eg Sustainability Accounting Standards Board, International Integrated Reporting Council, GRI), assurers, aggregators, analysts, raters and users – and each of which aim to make capital and other markets agents of, rather than impediments to, sustainable development.

For some of these links, standards emerge through external agents – GISR in the case of ratings – providing the framework necessary for bringing coherence and harmonisation to the common goal of each of the parts of this virtuous value chain (see figure below). 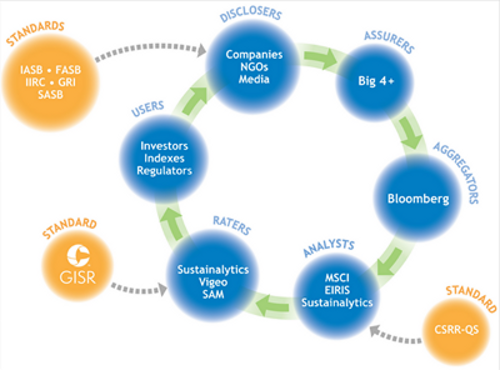 In a global economy, standards play a vital role in creating a common vocabulary and shared metrics, which then facilitate and elevate the quality of decision-making among investors and other stakeholders.

GISR follows a long tradition of such efforts of standardisation, ranging from the ILO Core Labour standards to the Universal Declaration of Human Rights, the Global Compact and GRI. Financial accounting and reporting, too, continues to strive for common rules and protocols to provide a universally-agreed-upon basis for assessing the financial condition and prospects of companies.

A global economy needs generally accepted language developed by independent, external agents, whether for purposes of disclosure, ratings, purchasing, or other activities integral to an building a sustainable economic system.

To be clear, GISR will not rate companies. Instead, it will equip other organisations with the ability to apply its ratings standard through a process of certification, training, and follow-up quality assurance.

It will offer both a stand-alone standard as well as a process by which existing and future ratings methodologies may be certified as “GISR-compliant”. This two-pronged approach provides the opportunity for innovation (eg devising a new generation of forward-looking indicators), while at the same honouring the rich intellectual capital contributions characteristic of existing raters.

Rio+20 marked the 20th anniversary of the seminal 1992 World Conference on Environment and Development. Many of the Earth’s vital signs – environmental, social, and economic – are perilously fragile.

Ecosystems destruction continues with minimal abatement. Climate volatility is intensifying. Human and labour rights are under assault in many parts of the world. And even as technological advances promise to reduce or reverse these ominous trends, the political will to undertake and implement the necessary systemic changes is in woefully short supply.

The future of sustainability in the 21st century hinges in part on rethinking the definition of well-being and development. Among the most pivotal of these actors is the corporation, whose purpose and mission, strategies and practices, and goods and services are indispensable to meeting the urgent problems that lie ahead.

Yet change in business behaviour has been slow in coming relative to the multiple perils confronting society. Progress has been decidedly uneven across companies. Most are held hostage to short-term investor pressures and a myopic view of wealth creation that is dominated by a focus on financial capital to the exclusion of other “capitals” indispensable to long-term, inclusive wealth creation; namely, natural, human, social, and intellectual capital.

Moving companies from incremental to transformational change requires new forms of performance assessment, ones that align with the core of attributes of sustainability: including: integration across economic, environmental, governance, social dimensions; long-term horizons in designing and implementing corporate strategy and practices; and measurable commitment to preserving and expanding the stock of all forms of capital: human, natural, social, financial, and intellectual.

If sustainability leaders are to be properly rewarded and sustainability laggards effectively motivated to change, investors, communities, NGOs, and companies themselves must deploy rigorous, credible, and transparent tools for judging progress across all aspects of sustainability performance.

That is GISR’s vision. It is the vision of many Rio+20 participants. It is a vision the time for which has come.

Allen White is vice-president and senior fellow at Tellus Institute, co-founder and former CEO of GRI, and founder and co-chair of the Global Initiative for Sustainability Ratings.

The CR Reporting and Communications Summit 2012

A cavalcade of reports ahead of next week's COP27 meeting in Sharm el-Sheik highlight the scale of the global warming challenge, and how the data needed to take action is in critically short supply

In conversation with Elizabeth Mrema, the woman seeking a ‘Paris moment’ for nature at COP15

The head of the UN Convention on Biological Diversity is also co-chair of the Taskforce on Nature-related Financial Disclosures. She talks to Terry Slavin about how business is supporting her efforts to achieve an ambitious global biodiversity framework in Montreal in December

A cavalcade of reports ahead of next week's COP27 meeting in Sharm el-Sheik highlight the scale of the global warming challenge, and how the data needed to take action is in critically short supply

In conversation with Elizabeth Mrema, the woman seeking a ‘Paris moment’ for nature at COP15

The head of the UN Convention on Biological Diversity is also co-chair of the Taskforce on Nature-related Financial Disclosures. She talks to Terry Slavin about how business is supporting her efforts to achieve an ambitious global biodiversity framework in Montreal in December

In the latest issue of The Sustainable Business Review, our columnists analyse some of the latest developments, from the Net-Zero Banking Alliance weakening its language on phasing out fossil fuels, to how the energy crisis is putting the wind in the sails of community energy