The biggest food brands require suppliers to adhere to principles of free prior and informed consent, but implementation is thin on the ground, reports Eric Marx

Any effective approach for curbing deforestation and climate change should clarify and secure community land rights. This proposition, known as FPIC (free, prior and informed consent) is pushed by environmental activists and human rights groups as the next ground upon which business practice could soon evolve, amidst a recognition that none of the companies that pledged to protect forests are on track to achieve their 2020 “zero-deforestation” targets.

The momentum is fueled by increased threats to forest-dwelling communities, with nearly half of the 281 human rights activists who lost their lives in 2016 murdered for protecting land and environmental rights, according to Oxfam.

Those who struggle to protect planet and people should be celebrated as heroes, but many are paying a heavy price

Last month UN Environment launched the UN Environmental Rights Initiative to address “the ongoing threats, intimidation, harassment, and murder of environmental defenders around the world”. It called upon the private sector “to move beyond a culture of basic compliance to one where the business community champions the rights of everyone to a clean and healthy environment”.

Erik Solheim, head of UN Environment, said: “Those who struggle to protect planet and people should be celebrated as heroes, but the sad fact is that many are paying a heavy price with their safety and sometimes their lives. It’s our duty to stand on the side of those who are on the right side of history.” 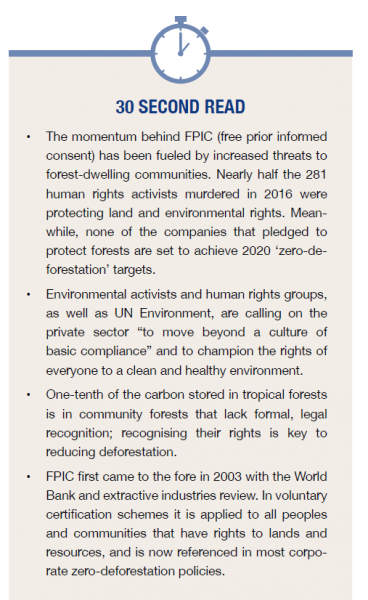 There is credible scientific data that forest-dwelling communities – including indigenous peoples, women and other minorities – can do the job of protecting forests better than anyone else if given property rights and management responsibility. In the Brazilian Amazon the deforestation rate is 11 times lower in indigenous peoples' and community forests. In the Guatemalan Peten it is 20 times lower, while in the Mexican Yucatan it is 350 times lower, according to an Oxfam report last year, Pathways to Deforestation-free Food.

Since one-tenth of the carbon stored in tropical forests is in community forests that lack formal, legal recognition, recognising their rights is key to reducing the risk of deforestation, the report argues.

Conflict over land rights is taking a heavy financial as well as environmental toll. Mongabay reported this month that a study commissioned by the Indonesia Business Council for Sustainable Development found that tribes such as the Suku Anak Dalam, who have been locked in conflict over encroaching palm oil plantations for three decades, are paying up to 60% of their income to buy food and services they once got for free from the forests. Another study, analysing data from conflicts in five oil palm plantations, found that the companies, which were not named, were paying $500-$15,000 per hectare to manage the conflicts.

In October, a new global institution, the International Land and Tenure Facility, will be launched. Backed by Sweden and Norway, the facility will invest $10m a year for the next decade in titling projects in tropical forests in Asia, Latin America and Africa.

Support is there from the UN and some governments to head in this direction, but what about the private sector?

FPIC first came to the fore in 2003 with the World Bank and extractive industries review. Two years later it moved in to the food and beverages sector via the Roundtable on Sustainable Palm Oil. It has since been adopted by international financial institutions like the World Bank and International Finance Corporation, as well as other commodity certification schemes. It is required practice for all UN agencies, and specific guides for implementation have been developed for its Development Programme (UNDP), programme for Reducing Emissions from Deforestation and Forest Degradation in Developing Countries (UN-REDD), and Food and Agriculture Organization (FAO). 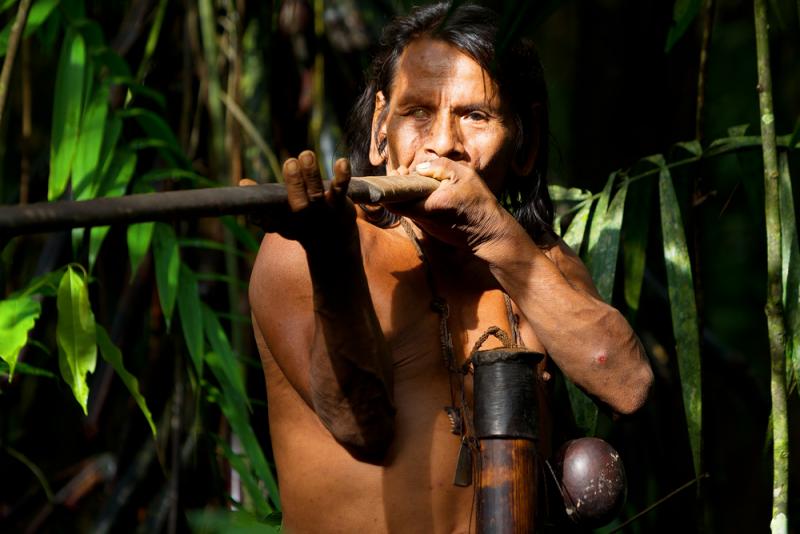 “There is an enormous amount of guidance out there,” said Margaret Wachenfeld, a senior research fellow at the Institute for Human Rights and Business (IHRB) who contributed to the Corporate Human Rights Benchmark (CHRB), a new scoring system unveiled last year analyzing agricultural products, apparel and extractives industries. The benchmark lists several FPIC indicators with regards to land transactions and what is deemed good performance.

While there is no generally accepted definition of FPIC, in the context of forest supply chains “free” means there has been no coercion. It is “informed” when a complete disclosure of all information related to the plans is made in a language and medium that is comprehensible and easily accessible by the affected communities. “Prior” means the consent is sought and obtained during the early conceptualisation and development phases of projects and activities. And “consent” can only be granted if the relevant communities have the choice to accept or refuse the project at hand.

In voluntary certification schemes FPIC has begun to be applied to all peoples and communities that have informal, collective or customary rights to lands and resources, said Dr Marcus Colchester, a senior policy advisor at the Forest Peoples Programme, a London-based human rights organization.

You cannot accept what the government says. You have to find people on the land and you have to engage with them

But national legal frameworks often don't recognize customary rights. Permits and investments are then handed out without consideration of communities' rights and livelihoods, presenting a stumbling block to proper FPIC implementation, said Colchester.

The evolving best practice in this area will have check-in points to determine changed conditions on the ground. It should include grievance mechanisms and third-party monitors – often staffed by locals – but, above all, companies need to do their own due diligence, said Wachenfeld.

“That's one big lesson,” she added. “The biggest MNCs [multinational companies] have learned to look behind the concession and ask whether everything is fine. You cannot accept what the government says. You have to find people on the land and you have to engage with them.” 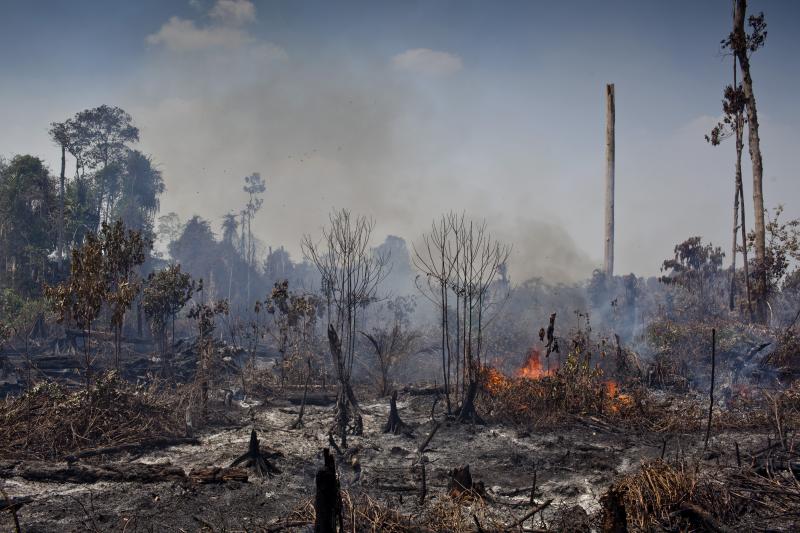 FPIC is now referenced in most corporate zero-deforestation policies, according to Aditi Sen, Oxfam America's senior policy adviser on climate change, and author of the Pathways to Deforestation-Free Food report.

The report, an analysis of FPIC and land tenure commitments made by the 10 biggest food and beverage companies and three of their key suppliers, finds that while all companies analyzed require suppliers to adhere to the principle of FPIC, its implementation remains “challenging”.

It cites Kellogg, Nestlé and Unilever for their efforts to track the number of smallholder farmers in their supply chains and/or having targets for engaging smallholder farmers. But the report says none have policies aimed at ensuring farmers earn a living income or commitments to offer transparent, stable and fair sourcing relationships to small-scale producers.

At a minimum, companies should honour the UN Special Rapporteur's call for businesses to adopt a zero-tolerance policy on attacks against human rights defenders.

The report also urges companies to endorse the Voluntary Guidelines on the Responsible Governance of Tenure of Land, Fisheries and Forests (VGGT), published by the UN’s Food and Agriculture Organization in 2012. Of the 13 companies studied by Oxfam, only Nestlé, Unilever, PepsiCo, Coca-Cola, Cargill and Wilmar have a land policy that endorses the VGGT.

The point is you have to go beyond risk-mitigation, said Sen. “You have to take these sustainability policies in the bloodstream of the company.”

Eric Marx is a Berlin-based journalist covering issues ranging from green energy to sustainable sourcing, climate change and transparency. He has served as a correspondent for ClimateWire News and as an energy reporter with Montel newswire

This is part of our in-depth briefing Land Rights. See also:

Zeroing in on community livelihoods in the palm oil industry

ESG Watch: How the ‘global stocktake’ will force in...
Can business bridge the yawning gap in finance for natu...
Brand Watch: Things go badly for Coke, as activists att...
Policy Watch:  An unfair COP that will likely fail to ...
comments powered by Disqus