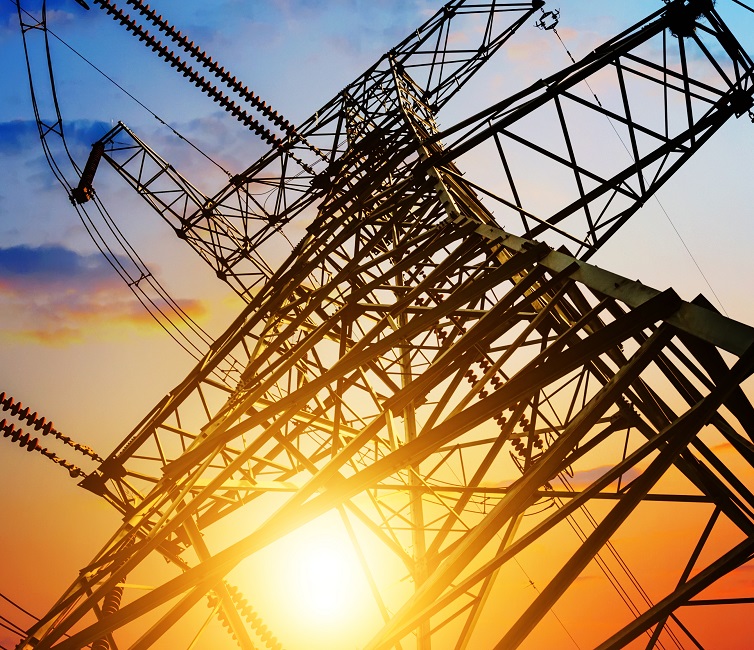 The Burbo Bank project will be the world's first offshore wind farm with storage to provide frequency response services to an electricity grid. The battery is being installed next to the onshore substation and will be used to help the UK National Grid maintain the required grid frequency at around 50 Hz.

Orsted, the world’s leading offshore wind farm developer, currently operates eight wind farm assets in UK waters and has a further four under construction. The Danish company aims to achieve a global installed offshore wind capacity of 11 to 12 GW by 2025.

"There will be some time needed to fully install, integrate and then commission the unit for operation sometime in Q1 2018," Sun said. Orsted is following standard compliance procedures to update its connection agreement and is currently discussing with National Grid the exact test requirements prior to commissioning, he said.

The Batwind project is supported by a Memorandum of Understanding (MoU) signed by Statoil, the Scottish Government and Offshore Renewable Energy (ORE) Catapult in March 2016. Under the MoU, Statoil will work alongside Scottish industry and universities to propagate and fund innovation in BESS through a development program managed by ORE Catapult and Scottish Enterprise.

Battery costs could fall by as much as 66% by 2030, according to a recent report by the International Renewable Energy Agency.

Market regulators are gradually implementing frameworks that support wider use of storage technology. In the UK, the government and energy market regulator OFGEM published the ‘Smart Systems and Flexibility Plan,’ aiming to reduce the barriers to energy storage deployment. Key features include the introduction of a new licence for electricity storage and plans to amend the Energy Act 1989 to define storage as a distinct subset of generation.

“The Plan puts electricity storage at the heart of our future energy system,” industry group Electricity Storage Network, said in a statement.

“In markets like the UK and U.S. where storage is becoming a license to operate, where frame conditions are emerging, Statoil will certainly consider battery storage integration to our assets,” she said.

Statoil owns 751 MW of operational offshore wind capacity and has a 50% stake in the 385 MW Arkona project under construction in Germany. In September, the company signed a joint venture partnership with Scottish & Southern Energy (SSE) to develop three 1.2 GW offshore wind projects consented at the UK's Dogger Bank, and the company has major expansion plans in the U.S.

As the value of flexible generation rises, this will support a range of income generation models for storage projects, including "in front of the meter" grid balancing services and developer-led behind-the-meter solutions which maximize wholesale market revenues.

The UK’s National Grid has recognised that the current markets for ancillary services such as frequency response, reactive power, and black start were designed for traditional thermal plant in mind, Sun noted.

"[National Grid] has committed to reforming these markets over the coming years to remove barriers to participation by newer technologies such as renewables, and we are actively engaged with this reform process,” he said.

Frequency response will be the main application trialed but Orsted is “open to trialing other use cases as and when the right opportunity arises,” Sun said. 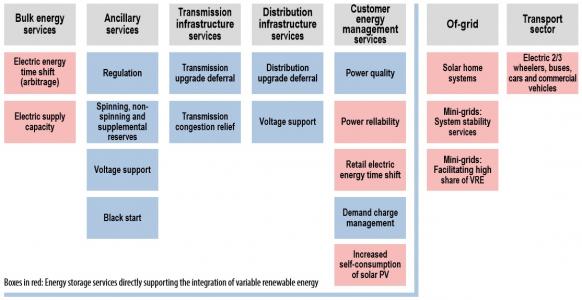 Potential business models include the capture of wind overshoots to sell excess generation on the wholesale market at later periods, reduction of balancing costs by self-regulation of power supply, capture of wholesale power price peaks through arbitrage, as well as system services such as frequency regulation, she said.

“We may not be able to test all these value drivers, but this is the aim.”

The incentive to co-locate or develop hybrid wind and storage projects will rise as wind subsidies are rolled back and projects are more exposed to wholesale market risks, Oliver Kerr, Associate at Aurora Energy Research, told New Energy Update.

Lower battery costs will be key to wider deployment, Kerr noted. Aurora predicts the installation cost for a 1 MWh battery will fall from 426 pounds per kWh ($564.2/kWh) to 333 pounds/kWh by 2025.

IRENA predicts significant cost reductions across all battery types in the coming decade, as the below chart shows. 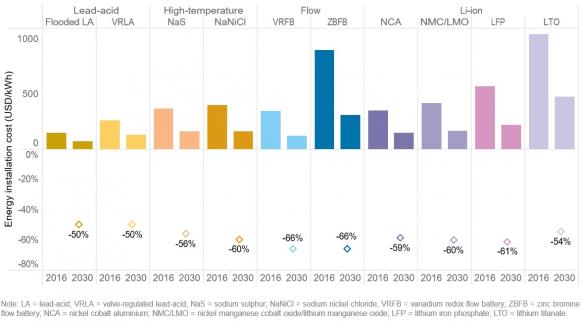 Under current conditions, batteries with one hour of capacity are often the most investable size for energy arbitrage, Kerr said.

“Operators could deploy longer-duration batteries to soak up more excess power generation, it really depends on how much balancing they plan to do but balancing can be achieved with a relatively small battery,” he said.

"Today’s turbines can adjust output, so you could actually avoid some imbalance costs and participate in markets like frequency response and the [generation] Capacity Market without co-locating with batteries,” he said.

A 2016 study by the Carbon Trust and Imperial College found that the commercial viability of storage increases when used across multiple services.

UK power market authorities are supporting this approach of layering value propositions, so that operators can monetize the value of their flexibility while technologies improve.

“This means maximizing access to the existing range of markets, alongside new markets or revenue streams and being able to stack value across them wherever appropriate,” the government’s ‘Smart Systems and Flexibility Plan’ said.

This strategy is helping to steer early applications of offshore wind with storage.

For example, Statoil has selected a battery size for Batwind which allows it to test and stack revenue streams without increasing the cost of the battery significantly, Strom said.

“We also aim to learn how to optimize the battery size in relation to the size of the wind farm to have a good business case,” she said.