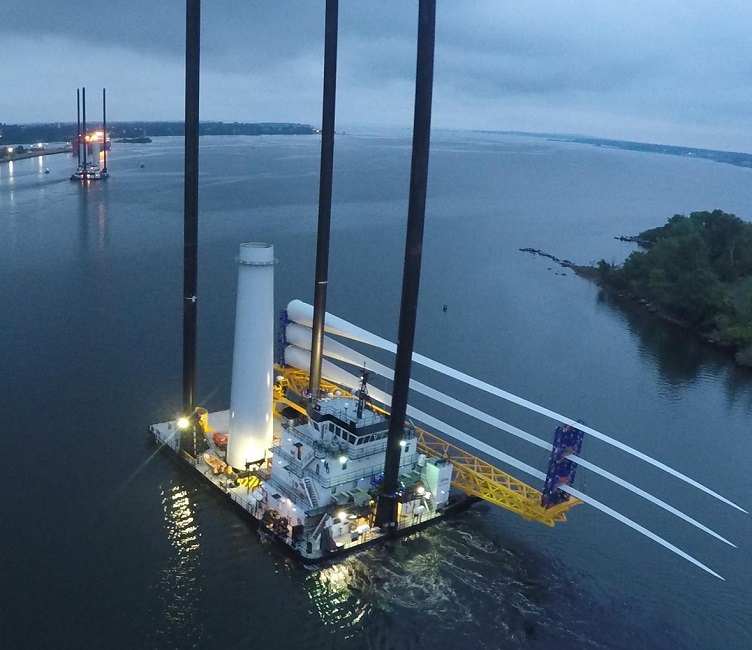 Some 28 U.S. offshore wind projects totaling 23.7 GW were planned or under development by mid-2017, with most near-term projects planned in the North Atlantic region, figures from the U.S. Department of Energy (DOE) show.

Last month, Florida-based Aeolus Energy Group announced it plans to build a U.S.-flagged vessel fleet to serve the offshore wind sector, expecting to generate 4,000 jobs in the next couple of years.

“We are confident that offshore wind at scale has finally arrived in the U.S.,” Elia Golfin, CEO of Aeolus Energy, told New Energy Update.

Aeolus will make “a considerable billion dollar” investment, Golfin said. The company plans to build jack-up vessels capable of installing 10 to 12 MW turbines, as well as cable ships to install medium- and high-voltage marine cables, service operations vessels to provide providing large-scale accommodation at sea, a fleet of crew transfer assets of vessels and helicopters, and port facilities in Massachusetts and Maryland.

The company will also invest in training facilities.

“During the construction season for offshore wind, we have a 24-hour work cycle. Staffing all of those jobs around the clock for months on end with qualified Americans is a significant challenge,” Golfin said.

Aeolus plans to have its first vessels ready for operation between the end of 2021 and early 2022. 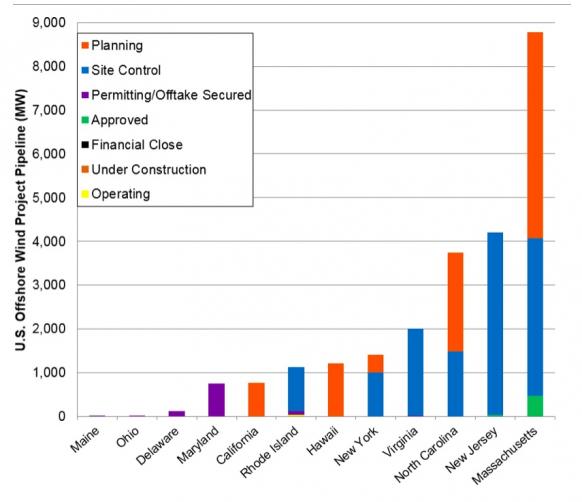 The two companies have already combined to install the Block Island windfarm, the U.S.'s first utility-scale offshore wind farm, in 2016.

The Jones Act requires that vessels transporting cargo between offshore wind farms and U.S. ports must be built in the U.S.

By using a Fred Olsen installation vessel at the Block Island site and smaller U.S. flagged feeder vessels to move wind farm components such as towers and blades, the project partners were able complete the installation 25% faster than expected.

"It is more expensive to do the feedering, but this (extra cost) is very negligible in the overall expenses of the installation process,” Orgeron said.

The partners will convert an existing Jonas Act-complaint vessel into a jack-up offshore wind installation vessel at around half the cost of a new vessel, Geissbuehler said. The converted vessel will be able to navigate the New Bedford Hurricane Barrier in Massachusetts, an area that most of the larger existing vessels cannot access.

The launch date for the vessel was delayed after GE announced in March it planned to launch a 12 MW offshore turbine, the world's largest, by 2021.

GE’s Haliade X turbine will be 250 meters tall and represents a significant advancement in offshore turbine capacity. Last year, Denmark’s Orsted installed the world's first 8 MW turbines in the UK and the average capacity of newly-installed turbines was 5.9 GW.

“We are in the process to upgrade several aspects of the vessel including an even bigger crane,” Geissbuehler said.

“We are making some critical design changes and this vessel is going to be much more powerful than initially planned,” he said.

The vessel will be able to transport equipment from onshore to the offshore wind farm site and perform installation, a process used in Europe.

“As wind farms get bigger, the feeder barge solution is becoming less and less attractive, except if you build very fast and very large feeder barges, which would be really expensive,” Geissbuehler said.

According to Orgeron, Falcon Global and Norway's Fred Olsen Wind Carrier's fleet can handle the vast majority of turbines available for installation, and no extra investment is planned in the short term.

“For the GE 12 MW turbine that was recently announced ... we are currently still working through the optimizations for those types of next-generation turbines, and whether they can be done with our existing assets,” Orgeron said.