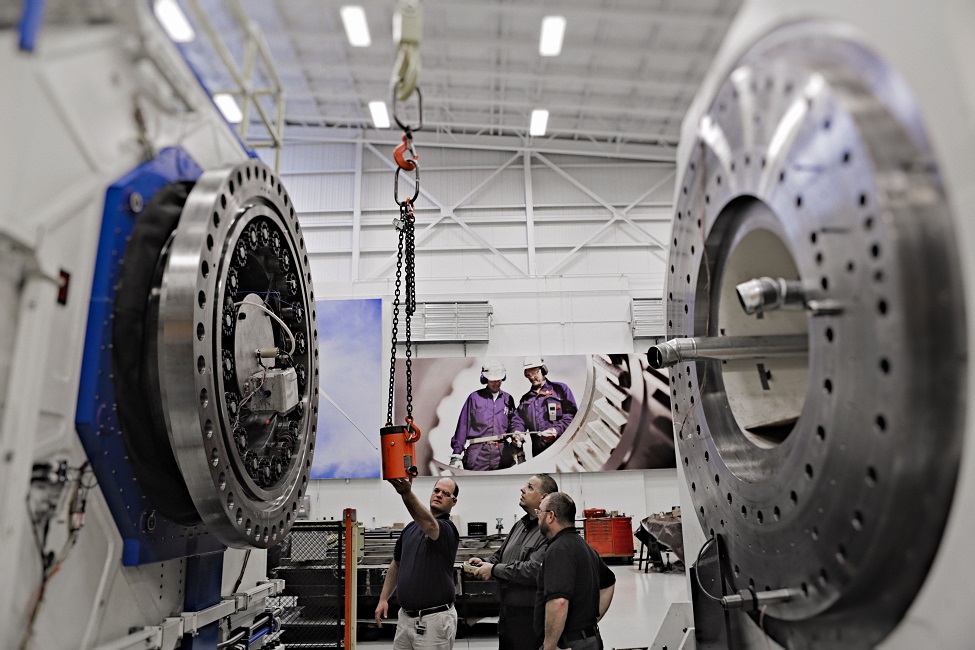 Ultra-large bearings for wind turbines are tested in operating conditions similar to those found in large multi-megawatt wind turbines at the Wind Turbine Technology and Test Center, opened by Timken and Stark State College in North Canton (Ohio) in 2013.

Improvements in design, manufacturing and Operations and Maintenance (O&M) technologies have reduced gearbox downtimes for onshore windfarms from around 1.4 hours per turbine per year in 2007 to 0.3 hours/turbine/year in the last two to three years, according to research by the U.S.’ National Renewable Energy Laboratory (NREL).

The introduction of journal bearings in gearbox systems is expected to cut costs and the latest bearing innovations include heat treatment technologies, coating and surface engineering , the research engineers said.

The International Renewable Energy Agency (IRENA) has predicted that the Levelized Cost of Energy from onshore wind could fall by 26% by 2025, on O&M and technology advancements.

Leading industry figures told the Wind O&M Dallas 2016 conference on April 12 that O&M costs could drop by 20% in the next five years, due to higher value components and collaboration between firms.

Major savings from competition in the O&M sector in recent years will be followed by gains from technology advancements, improved maintenance strategies and knowledge sharing, the conference speakers said.

Half of the bearing failures found by Timken are related to gearbox planetary problems, and the other half to gearbox high speed bearing problems. Non-bearing related issues are typically due to the quality of materials or lubrication.

“But a lot of the improvements that have been made in [bearings] over the last five years have only been installed in a small fraction of the turbines so far,” he said. Because of this, the level rate of future cost reductions is hard to predict, he said.

Recent component innovations will lead to gearbox lifespan extensions and failures typically seen after seven years of operation could be avoided until year 10-12, Brooks said.

“So each one of the improvements that you make (oil, bearings, better gears or better maintenance) with a little bit of incremental cost, if you just move that number out from seven years to 12 years, there will be huge savings.”

Replacement parts for gearbox faults and associated crane hire can cost approximately $250,000 for a 1.5 MW turbine, according to Sentient Science, a software specialist in predictive monitoring of wind farm components.

Adding loss of revenue from 10 days of downtime, plus labor costs, the total cost of the fault for a single turbine can amount to over $300,000.

Advanced prognostics able to identify early bearing and gear failures can result in cost savings for the operator of as much as 87% per event, through more minor component repairs performed uptower, Edward Wagner, chief digital officer at Sentient Science, said.

“The cost of parts is a fraction of a full gearbox exchange, the $100,000 crane cost would be eliminated, and the loss of revenue from turbine inoperability can be cut down to just three days,” he said.

High wind load and variability can increase bearing failures and Sentient Science has identified bearings failing within four to five years in the worst performing cases.

According to Wagner, early identification of bearing failures could extend the lifespan of gearboxes beyond the 20-year design life of the turbine system and new innovations will reap rewards in the years to come.

“We work with the bearings suppliers, and the new generation bearings are significantly better than they were 10 years ago, from a design and a material point of view,” Wagner said.

Most operators are yet to yield the cost savings from these new advancements, he noted.

“The problem is those bearings are not [yet] in the machines that are out in the real world.”