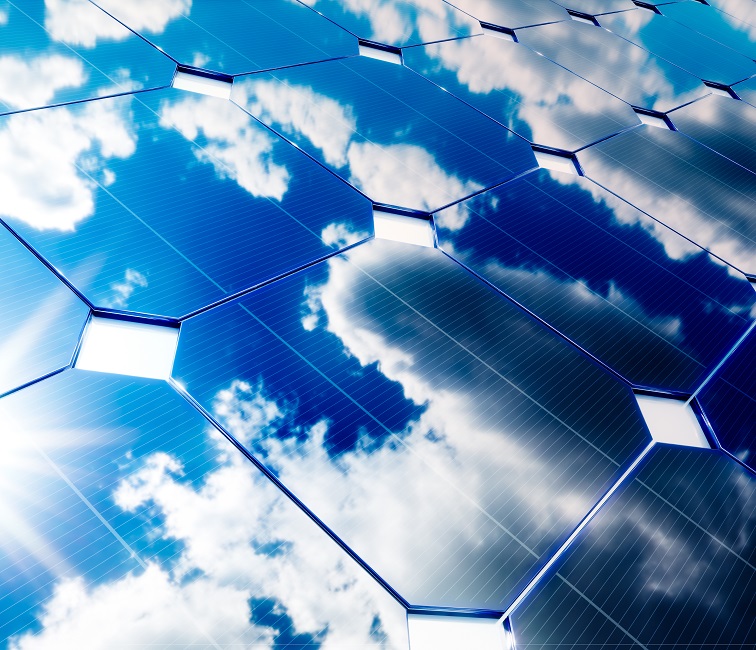 An increasing focus on grid reliability and gradual removal of solar power subsidies is raising the importance of accurate solar plant forecasting.

As solar plants become increasingly exposed to wholesale markets, accurate within-day and day-ahead forecasts allow operators to ramp up and down according to market or grid requirements, switch to alternative fuel types, or hedge their position.

“You don’t see that sort of change with wind,” Muller noted.

“Forecasting wind behavior over 48 hours can be quite accurate, but photovoltaic is a challenge. Even if you have a lot of raw data, it doesn’t necessarily give you the right indication of what will happen in the next six hours,” he said.

Forecasters typically base predictions on weather satellite data which can provide detailed information, particularly at the regional level. However, satellite forecasts are typically subject to a minimum 15-minute delay and cloud-based cameras are increasingly being used for shorter term forecasts.

“Very short-term forecasting, using cloud cameras, is new to the market. It fills in the gaps between satellite-derived cloud-motion-vector forecasts that are valid for predictions from 15 minutes to around five hours," Daniel Lassahn, an energy meteorologist at German-based monitoring and forecasting firm Meteocontrol, told New Energy Update.

"This is especially important if clouds could affect a ramp up in power output of PV plants located in small grids, which are more vulnerable to stability problems than larger grids,” he said.

Tests have shown that combining a variety of forecasting techniques provides the most accurate forecast, as the below graphic illustrates. 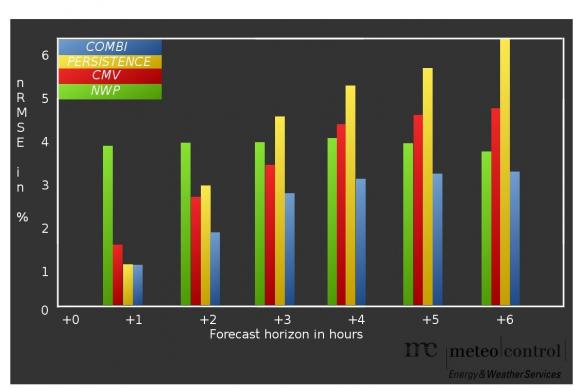 Accurate short-term output forecasts are of high value to power plant operators, as recently demonstrated by a team of researchers at the University of La Rioja, Spain.

In a new paper entitled “The Value of Day-Ahead Forecasting for Photovoltaics in The Spanish Electricity Market” the researchers estimate day-ahead solar forecasting could boost income at a 2 MW solar plant by around 3,000 euros per MW per year ($3,554/MW/yr), depending on market conditions.

As transmission grids become more sophisticated to accommodate rising renewable energy capacity and behind the meter assets, this will open up new income opportunities from grid services.

"The natural interface for that is the power electronics that is integrated in with the output of the PV array," he said.

Solar plant operators are set to benefit from an increasing speed and depth of forecasting data in the coming years, as more detailed data will lead to a more accurate power forecast, Lassahn said.

Satellites could provide spatial resolutions as high as 500 metres to 1 km per pixel in the future, compared with current resolutions of around 1 to 4 km/pixel, he said.

The frequency with which images are taken and the speed with which they can be accessed are also likely to increase.

At present, satellite images of Europe taken by organizations such as EUMETSAT are taken every 15 minutes, while in Asia new images are taken every 10 minutes. In addition, the delay in accessing images could disappear, with images relayed almost in real time.

Companies like Meteocontrol are continuing to apply new techniques to improve short-term solar forecasting, such as infrared satellite imaging.

This technology allows companies to assess cloud movements in the hours before dawn, indicating likely solar conditions in the first few hours of the morning that cannot be provided by light-based systems.

Within the last year, Meteocontrol has started using infrared imaging to derive cloud motion vector forecasts for solar assets in the early morning period, switching to visual cameras around one hour after sunrise, Lassahn said.

"This has already enabled us to greatly improve the quality of forecasting in the morning hours and will be of significant benefit in the future,” he said.

The New York Power Authority (NYPA) is currently working with the Electric Power Research Institute (EPRI), the U.S. Department of Energy and other local utilities, to develop improved output prediction models for both large solar generating facilities and smaller, roof-top, distributed solar plants. The New York State weather is highly variable and the state plans to increase solar power capacity from 1 GW to 3 GW by 2022.

As part of the project, the NYPA is employing sensors and other equipment to enable higher quality cloud and irradiance forecasting. The final phase of the project, scheduled to end in 2019, involves installation of solar cameras at four representative sites, providing detailed data on solar intensity and cloud movements.

“One of the things we want to do is to predict on a state level, for the near term, whether our distributed energy source is going to go away and whether we will have to rely on baseload plants,” Alan Ettlinger, Director of Research, Technology Development & Innovation at the NYPA, said.