The CSP industry will be ready for a wide-scale rollout of molten salt tower plants between 2018 and 2020, industry consultants have predicted to New Energy Update. 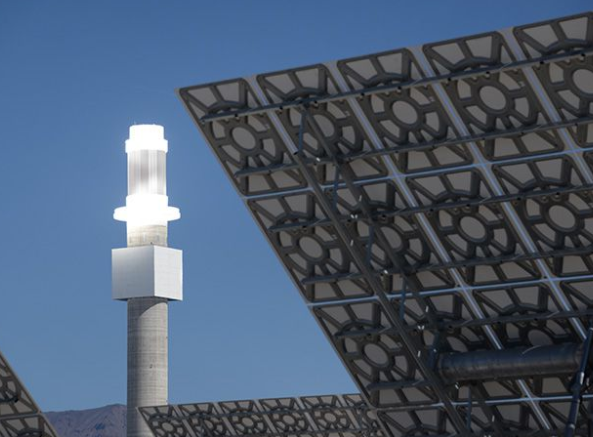 Molten nitrate and potassium salts are used for energy storage in many CSP tower plants, but the 110 MW Crescent Dunes plant in Nevada and 20 MW Gemasolar plant in southern Spain are the only commercial tower plants to use molten salt as a heat transfer fluid (HTF) as well as for storage.

Looking beyond 2020, many molten salt tower projects are in planning or development, including: the 250 MW TuNur project in Tunisia, the 240 MW Copiapo hybrid CSP-PV project in Chile, the 100 MW Redstone project in South Africa, and seven additional projects in China with a combined 535 MW capacity.

Ralf Wiesenberg, Managing Director of AF Aries Energy, said molten salt towers have the potential to become the most widely used CSP technology, but there must be “at least five” such plants in commercial operation for a wider rollout.

“The concept is proven, but for a wider acceptance and application of cost reduction potential we need more plants in operation,” he said.

Molten salt towers have more potential for cost reduction than parabolic trough technology when certain conditions are met, Sergio Relloso and Yolanda Gutierrez explained in a recent paper on SENER’s involvement at Noor III. These conditions – namely high levels of DNI, low atmospheric attenuation, and necessity of storage – occur in countries like Chile, South Africa, Australia, and Morocco, they wrote.

Juan Ignacio Burgaleta, a CSP engineering consultant and former technology director at Torresol, agreed that molten salt towers with 150-200 MW capacity have an attractive future. Burgaleta, who oversaw the world’s first pilot-scale molten salt tower plant in southern Spain, argued the industry would be ready for a wider rollout by as early as this year – with Noor III the “key point”.

Noor III is important because it is bigger than the existing plants on every relevant metric and can therefore prove the viability of molten-salt tower plants on a larger scale, Burgaleta explained. Noor III will have 150 MW capacity, 1.3 times greater than Crescent Dunes, and 7.5 times greater than Gemasolar. Although it offers only 7 hours’ storage (compared to 10 hours for Crescent Dunes and 15 hours for Gemasolar), its storage tanks will be larger. Each heliostat at Noor III will measure at 180m2, 50% larger than the 120m2 deployed at the other projects. Noor III’s solar field will have a greater number of heliostats than the other projects. And its tower will rise to a height of 240m, greater than the 195m and 140m at Crescent Dunes and Gemasolar respectively.

Parabolic trough plants still account for the bulk of global CSP capacity, despite the gains made by solar tower technologies in recent years. Nonetheless, many people in the industry are bullish on the prospect of solar towers. As Frank Wouters, Director of the EU GCC Clean Energy Network, told New Energy Update: “The higher efficiencies that towers have will provide a competitive edge over troughs in locations with the right solar conditions.”

Until now, most CSP towers, including those at the 392 MW Ivanpah plant in California and the 50 MW Khi Solar One plant in South Africa, have used water as the heat-transfer fluid. 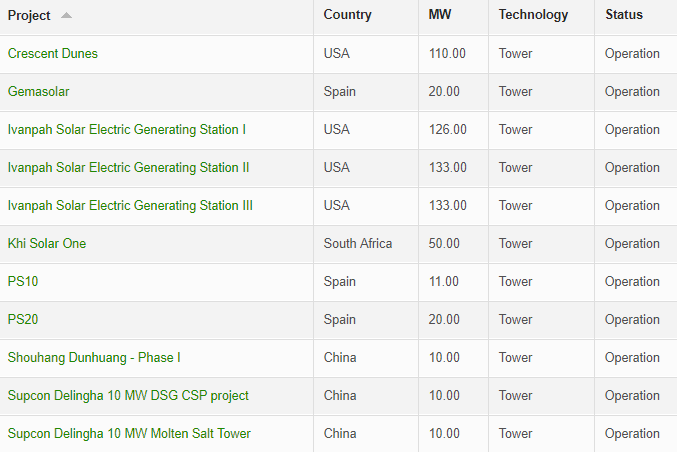 Of the tower plants (with capacity of 10 MW or greater) currently in operation, only Crescent Dunes and Gemasolar use molten salt as a heat transfer fluid (Image credit: CSP Today Global Tracker)

It is hoped that molten salt, a high-density material that transforms into a liquid state at high temperatures and has the ability to store an abundance of energy, will help give tower plants the levels of efficiency to compete with parabolic troughs in areas with high direct natural irradiance (DNI).

Molten salt plays two roles at Crescent Dunes and soon it will do the same at Noor III and Dunhuang: first, the molten salt is pumped up to the tower, where the heat exchanger heats the salt from around 550 Fahrenheit (290 Celcius) to 1,050 Fahrenheit (550 Celcius). Then it is a stored in a tank to be used for electricity generation during peak demand.

There is a lack of appropriate tools to conduct a proper simulation of molten salt tower plants, and simulators usually do not know the actual limitations and configuration of the receiver they are trying to represent, Relloso and Gutierrez wrote in their paper, published by the American Institute of Physics' AIP Conference Proceedings. This can lead to significant differences between simulated annual results and real operational plants, they added.

“There can be thousands of alternatives when the design ranges of solar field size, turbine power and storage capacity are combined, with each option resulting in a different levelized cost of electricity. It is then of the most importance having a simulation software capable of: accurately calculating annual plant performance; estimating project cost (for design purposes); and managing thousands of design alternatives in an iterative mode.

The experience of Gemasolar allowed SENER to fine-tune its SENSOL software in order to accurately simulate the receiver limitations and heliostat-aiming strategy. For example, it was discovered at Gemasolar that the energy concentration ratio was so high (1,136:1) that if all heliostats in the field were pointed to the center of the receiver, incident flux would reach peak levels above 2000 kW/m2. In these conditions, receiver tubes would be permanently damaged in a few operation cycles.

As operations begin at Nour III and Dunhuang, and later at Aurora and DEWA, global molten salt tower capacity will increase 10-fold, and developers should be able to rely on enough real-world date to join the wide-scale rollout with confidence.