Unlike CSP companies dealing with the complex difficulties of selling electricity onto a grid with solar power generation, companies offering CSP for specific commercial uses can start small and grow, because they are simply selling a product to other businesses. 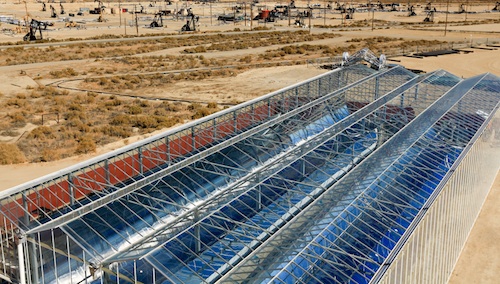 GlassPoint is one company doing quite well offering a specific CSP application. It sells solar steam-making equipment to the oil industry, replacing the use of gas in enhanced oil recovery (EOR). The company’s focus on process steam heat led to a very different approach than if it was selling megawatt hours to utilities.

The drive for more efficient CSP, to get higher temperatures, is what has led to the innovations in towers, molten salts, super-critical CO2, molten glass and other exotic technologies and materials.

But in the steam application for EOR, higher temperatures have no economic value. Differences in reservoir depths set the pressure for the steam, and each particular oil field dictates the more temperature needed.

“In EOR, high temperatures don’t help you, in fact they hurt,” explains Macgregor. “You’re aiming for a very specific temperature for the process. Usually that is around 350 C.”

Producing steam at lower temperatures is not just easier, but cheaper. But not only is the technology easier, the business model is easier too.

“If I do power generation, I've got to go and find about 300 million dollars in equity and go 700 million in debt, and I have to convince all those people, and then I get paid back by the utilities so many cents per kilowatt hour,” he relates.

“That business model is very capital intensive and very hard to get started because the bank's going to say ‘how well is it going to work ten years from now, and who's going to guarantee that it's going to work?’”

By contrast, selling to one customer at a time is more straightforward. (And it doesn’t hurt that it’s a customer that is very well capitalised.)

“With an oil company: they don’t use debt finance,” says MacGregor. “They just buy the equipment. We don’t have any banks involved. We don’t need loan guarantees from the government or any of that stuff. We have a customer who is able to buy them.”

The smaller scale also makes growing easier, and the system can be cost-effective at any scale, according to MacGregor.

“In power generation, minimum economic scale is 50 MW,” he estimates. “In our case there is no minimum scale. A btu is a btu. You can build quite a small thing.”
GlassPoint's EOR systems so far have ranged in size from 300 KW in California to 7 MW in Oman, in the Middle East.

As well as the lower temperatures than ideal in power-generation, another difference is water quality. EOR does not require the super pure water we see in CSP, he says. “In an EOR application, you take really horrible produced water. It comes out of the oil well along with the oil, you strip away the oil, you’re left with this water, you turn that to steam and inject it. The water quality is radically different.”

Surprisingly, it costs less, rather than more to run this nasty stuff through the machinery, which is simply the more rugged boiler and piping that has long been used - and its technology refined - in traditional thermal steam production powered by gas.

“Most solar companies use stainless steel in their piping. Oil field water has been softened so it’s got chlorine in it and chlorine causes cracking in stainless steel,” he says. “so you have to use regular steel; carbon steel, that’s cheaper than stainless, and it works, and it’s the only thing you can use for the chlorine.”

Serendipity of the glass housing

GlassPoint’s iconic glasshouse cover for its CSP field was originally engineered simply in order to cut the costs of wind protection. It cost less, says MacGregor, to suspend rows of relatively flimsy mirrors inside a sturdy glass box, because the total plant can be constructed with less than half the metal, steel and aluminium of an equivalent CSP project, and the supply chain for all the elements is well established.

Initially, he assumed his best market would be California oil fields, but in the Middle East, the dirty desert oil field environment means big trucks are going by and routinely churning up the dusty desert sand. He uses standard robotic cleaning on the roof at night, but the sides can get dusty. Even so, if dust obscures some sun, the low heat requirements of EOR can be easily met.

While he was originally thinking of wind protection with the enclosed design, an added bonus has turned out to be dust protection of the CSP equipment, in a region prone to heavy dust storms.

CSP as the cheaper option

Unlike the CSP used in electricity generation, in this application - CSP is actually cheaper than its alternative. That’s because, counter-intuitively, there is a shortage of usable gas for EOR in the Middle East.

That has been a surprise for MacGregor, who assumed even just three years ago that his customers would be in the (much smaller) American market, back when the high prices for gas were in the US, and the low prices were in the Gulf region.

The gas squeeze in the Gulf means that CSP process steam is competitive with gas prices even when break-even is only $5 per mm/btus, while spot prices for liquid natural gas in the Middle East hover around $18.

Ending a huge waste of gas

For the increasingly “heavy” (or “hard to get”) oil production, amazingly, “basically you’re heating up a cubic mile of rock.” Gas-powered electricity has traditionally been used to make the steam for this gargantuan task. He says that somewhere around 20% of all the gas used in California is burned just for oil recovery.

“It takes years and years of injecting huge amounts of steam to heat up that much rock, and then you have to keep it hot for years,” he explains. “Typically when they first start steaming, nothing happens for the first couple of years. By year seven they are getting peak flow, and then they steam for decades after that. The amount of gas consumed is mind boggling.”

He estimates the gas used for this process at almost 2 quadrillion btus - and that‘s every year. The climate implications are staggering.

On a planetary scale, it is good news that rather old-school trough CSP could so readily eliminate such an extravagant waste of once-in-a-million year hydrocarbons, with such consequences for future generations. On a smaller scale, it has turned out to be good fortune too, in a rather unexpected confluence of coincidences.

“It’s almost a perfect storm for us,” MacGregor confirms cheerfully. “These countries have lots of oil, fantastic sunshine and a shortage of fuel. You couldn’t make that up.”

But Mohammed Hasan Al-Zayer, Engineering Consultant at the Saudi Government Ministry of Petroleum and Mineral Resources tells CSP Today that there is no shortage of gas in Saudi Arabia.

And he says the Saudis have no need for solar in EOR in any case as their oil fields are not in the depleted state that requires these enhanced techniques of extraction. He says their abundant oil reserves are plentiful in the Kingdom until at least 2030.

But he mentioned that they are doing a pilot EOR project in one of the Gawar fields, for the day when they do need EOR, but for this they are investigating the use of CO2 for the injection, reflecting the Saudi interest in reducing carbon emissions by taking carbon dioxide out of the atmosphere.

"Renewable energy is in the Kingdom's long term interest," Mohammed Hasan Al-Zayer tells us. "After all, the world needs oil, and we need the money. So instead of using quite a bit of oil domestically and have less for export, we can save that for export and generate power from the resource which we have, which is solar."

In the US, despite very low price of gas for EOR, BrightSource and Chevron have partnered to build the largest CSP EOR facility in the world, at 29 MW. For BrightSource, it is a demo project that they are not expecting to be commercial on its own, but rather to act as a lab to learn from the experience.

As MacGregor points out, there are a lot of differences in the mechanical side of CSP for EOR, and for BrightSource it will mean a lot of technological changes.

But if the BrightSource project succeeds, with their financing abilities as major players, this will certainly catapult CSP EOR into the big time. As the increasing number of depleted oil fields multiplies globally, extracting the last of the oil could well become a very key use of CSP, and one that greatly reduces climate impact of the oil industry.